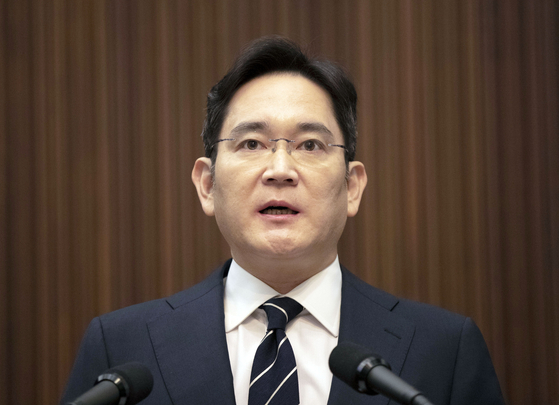 
Samsung’s jailed leader Lee Jae-yong has been included on a list of possible parolees, fueling speculation that he will be sprung next month.

According to sources informed about the parole process, the Seoul Detention Center recently submitted a list of inmates eligible for parole to the Ministry of Justice, and Samsung Electronics Vice Chairman Lee was included. Lee is in jail for bribing former President Park Geun-hye. He has less than 13 months left in a sentence of two and a half years.

After 52 detention centers and prisons nationwide conduct preliminary reviews, they draft lists of prisoners eligible for parole and submit them to the ministry. The ministry's parole board makes the final decisions and it meets early next month.

Although the law says that a prisoner is eligible for parole after completing one third of a prison term, the ministry has operated on an internal regulation that prisoners should serve more than 80 percent of their terms before parole.

In May, Justice Minister Park Beom-kye approved a major change in the ministry’s internal regulation allowing prisoners who serve about 60 percent of their prison terms to become eligible. By the end of this month, Lee will complete 60 percent of his term.

There is a tradition that presidential pardons and paroles are granted on important political anniversaries such as Aug. 15, Liberation Day.

If Lee is released on parole, he would still be barred from returning to running Samsung. Under the law governing special economic crimes, the Ministry of Justice imposed a five-year employment restriction on Lee in February, after his sentence was finalized in January.

Article 14 of the Act on the Aggravated Punishment of Specific Economic Crimes bars those convicted of embezzlement or breach of trust involving more than 500 million won ($434,773) from working at at companies closely related to the criminal activities. Under that law, Lee won’t be able to return to Samsung management until the second half of 2027.

The justice minister, however, has the power to lift those restrictions.

Chairman Song Young-gil of the ruling Democratic Party, who has been floating the idea that the Moon Jae-in administration might release Lee on parole rather than a presidential pardon, brought up the topic again during a visit to Samsung Electronics’ Hwaseong Campus on Tuesday.

Song said Lee will be eligible for parole in August. “I think [the government] is considering the demand from the semiconductor industry and public sentiment,” Song said.

The Blue House refrained from comment, saying paroles did not involve it.

“Parole is a process conducted by the Ministry of Justice according to its standards,” said a senior presidential aide on Wednesday. “We have nothing to say about a presidential pardon for Lee.”

When Moon met with leaders of Korea's four largest business groups in June, including Samsung Electronics, the president seemed receptive to business leaders’ pleas to pardon Lee. At the time, Moon told them that many people agree with their request and he understood that a company in the current economic situation needs to make bold business decisions, suggesting the need for Lee's leadership.

Meanwhile, sources close to the administration denied media reports that Moon would grant pardons to his two predecessors: Lee Myung-bak and Park Geun-hye.

Ousted President Park is serving 20 years in prison for abuse of power, taking bribes and misappropriating funds from the country's spy agency. The Supreme Court last October upheld a 17-year sentence for Lee for embezzlement and taking bribes.

Park was recently admitted to a hospital for medical treatment, fueling speculation that she might be granted a pardon. Quoting government sources, the Chosun Ilbo reported Wednesday that Moon is considering pardoning Samsung’s Lee and Park, but not former President Lee.

A close associate of Moon denied the report.

“Granting pardons is the prerogative of the president, so he will make a proper decision,” said Rep. Youn Kun-young of the DP, who served as director for state affairs planning and monitoring of the Moon Blue House. “But I am pessimistic about pardoning Vice Chairman Lee. I hope our society will set a precedent that a prisoner will no longer be pardoned because he is rich.”