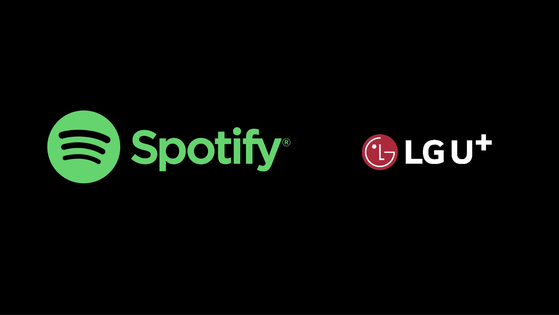 
Spotify is offering a free six months of service to LG U+ customers.

Its Spotify Premium — the only level offered in Korea by the Stockholm-based company — will be made available to those subscribing to LG U+ mobile plans costing 85,000 won ($74) a month or above, which includes the 5G Premier, 5G Signature and LTE Premier plans.

People using other 5G and LTE plans will be given a three-month free trial.

The offer will be available from Tuesday to Aug. 10 next year.

LG U+ is the only of the three major mobile carriers — KT, SK Telecom and LG U+ — that doesn’t have a music streaming service of its own.

LG U+ has been offering streaming subscription discounts for Genie Music, 12.7 percent owned by the mobile company, but it does not have an exclusive music-streaming service discount deal.

Spotify has been growing since its release in Korea in February, but only had 1.04 percent of the local music streaming market as of May. It had 326,000 monthly active users (MAU) in June according to data analysis company IGA Works, up 15.45 percent on month. Melon had 8.56 million MAU and Genie Music 5.05 million.

Spotify and LG U+ will engage in a wide range of co-marketing activities, including TV commercials, starting Aug. 13.

“The strategic partnership with Spotify, the world's leading music streaming platform well-known and acknowledged for its advanced personalized service and music curation, will enhance our competitive-edge," said Choung Hye-youn, vice president of LG U+’s Integrated Marketing Communication unit. "We will continue to do our best in creating benefits to our customers."

LG U+ to turn Yeosu Industrial Complex into a smart factory