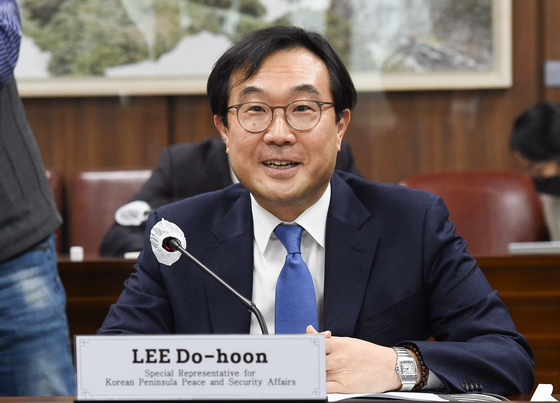 In this file photo from Dec. 9, 2020, Special Representative for Korean Peninsula Peace and Security Affairs Lee Do-hoon speaks during his meeting with U.S. Deputy Secretary of State Stephen Biegun at the Foreign Ministry in Seoul. [YONHAP]

Yoon’s foreign affairs, national security and unification policy advisory team, according to Chang, has 19 members and is chaired by Yun Duk-min, chair professor at Hankuk University of Foreign Studies.

One member of the team is Lee Do-hoon, a veteran diplomat who played a key role in the Moon administration’s push for the Korea Peninsula Peace Process.

“We recruited many people who share the same philosophy as Yoon,” said one of Yoon's aides. “It was our plan to normalize the blueprint of Korea’s diplomacy in order to complete the goal of denuclearization of the Korean Peninsula.”

From September 2016 till May 2017, he served as the presidential secretary for foreign affairs at the Park Geun-hye Blue House.

After Moon took office in May 2017, Lee was appointed as the special representative for Korean Peninsula Peace and Security Affairs and Seoul’s chief negotiator for the six-party nuclear talks and served the posts from September 2017 till December 2020.

In the Moon government, Lee was the counterpart of the Donald Trump administration’s deputy secretary of state and special representative for North Korea, Stephen Biegun. Lee was also the chief negotiator of the Korea-U.S. Working Group which handled inter-Korean exchange and cooperation projects and sanctions.

Despite his role in the Moon’s North Korea diplomacy, Lee was not given a new assignment in the recent reshuffle and retired in March. The special representative for Korean Peninsula peace and security was a vice minister-level post, and Lee’s retirement was seen as a surprise to many, because most of his predecessors were either promoted or dispatched as an ambassador to a major country.

Professor of Economics at Seoul National University Kim So-young heads the economic policy advisory team. Six other economic, financial and real estate experts are also working for Yoon. Among them is Kim Kyung-hwan, a professor at Sogang University who once served as the vice minister of land.

Seoul National University Professor Na Seung-il chairs a six-member team on education policy. He had served as the vice minister of education in the Park administration.