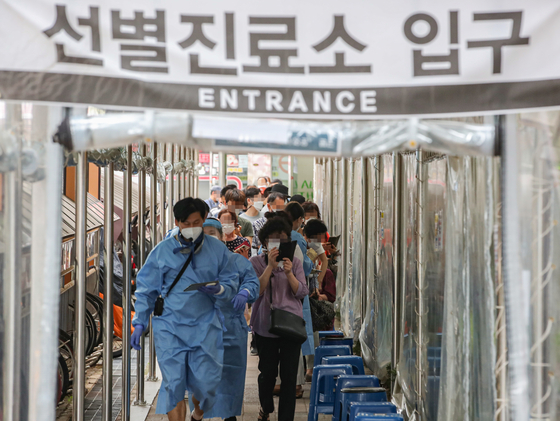 People wait in a long line to get tested for Covid-19 at a testing center in Gwanak District, southern Seoul, on Wednesday morning, when the country's daily new infections surged to a record 2,223. [YONHAP]


Korea’s daily Covid-19 cases soared past 2,200 for the first time since the pandemic began, and health authorities warned the worst is yet to come — telling people not to go on summer holiday.

"We are entering a new phase, a new crisis," Health Minister Kwon Deok-cheol said during a meeting on Covid-19 on Wednesday, urging the public to not go anywhere for the next few weeks.

"We sincerely ask you to stay at home and take a rest instead of traveling," Kwon said, promising a government-led "Stay at Home" campaign.

According to the Korea Disease Control and Prevention Agency (KDCA), the country’s new daily Covid-19 infections hit a record 2,223 on Wednesday.

Transmissions are spreading rapidly in other parts of the country, with 139 in South Gyeongsang, 125 in Busan and 84 in South Chungcheong.

President Moon Jae-in expressed concern Wednesday, saying, “Korea remains relatively in a better situation than other countries, but if we fail to curb the current spread of infections, this could be a turning point for more confirmed cases.”

To grapple with the fourth wave of pandemic, Korea has implemented toughened restrictions across the nation for over a month.

No more than two people are allowed to meet in public after 6 p.m. in the Seoul metropolitan area, while other regions are banning up to four.

However, the more transmissible Delta variant coupled with increased travel in the summer holiday season is leading to the spikes in infections, health authorities said.

The proportion of Delta variant cases in all Covid-19 infections from Aug. 1 to 7 was 73.1 percent, up sharply from 61.5 percent a week earlier.

“It is not easy to judge at this moment [whether infections are at the peak]," said Sohn Young-rae, a senior epidemiological strategist at the government’s Central Disaster Management Headquarters. "We'll have to wait and see this week’s spread.”

As the toughest social distancing restrictions seem to have had little impact in flattening the curve, experts have stressed the need to alter the distancing measures and make them even stricter.

“The current distancing measures were made when there were no Delta variants reported in the country,” said Chun Eun-mi, a professor of respiratory medicine at Ewha Womans University Mokdong Hospital.

“Putting the country in lockdown would be best, but Korea has never done it and won’t implement it ever,” Chun said.

“For now, shutting down [clubs and bars that allow dancing], as well as limiting multi-use public facilities is the best solution — allowing restaurants and cafes to serve only takeout and deliveries and limiting business hours to 9 p.m.,” she said. 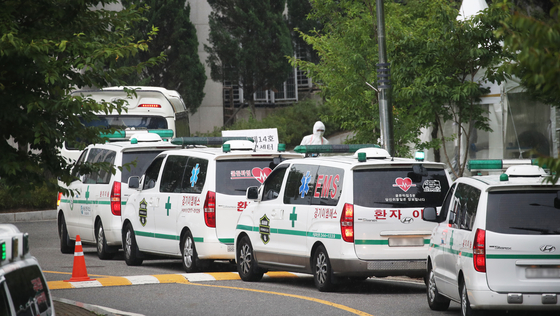 
However, health officials were cautious about where to go with the restrictions.

“Although there is a need to strengthen distancing measures, we are very careful about the side effects, as they can cause social and economic damage and especially difficulties for the working class,” Sohn said.

In order to protect people at high risk, authorities announced measures to strengthen health measures in nursing homes on Wednesday.

As breakthrough infections have sharply risen in such facilities in recent weeks, the government readopted preemptive Covid-19 testing requirements for all caretakers.

Until now, fully vaccinated people were exempted from taking tests, but from Wednesday, all caretakers must take polymerase chain reaction (PCR) tests once a week in Level 4 area and once per two weeks in the Level 3 area.

Those requirements will stay in place until Sept. 3 at least.

Visits to nursing homes will also be temporarily suspended.

Visits will be completely prohibited in Level 4 areas, while only non-contact visits with partitions will be allowed in other areas.

“Exceptions apply to very critical cases such as patients on their deathbeds, but other than this, we ask you to follow the strengthened visitor rules,” Park Hyang, a senior health official said during a briefing on Wednesday.

The government is also raising its guard ahead of the Liberation Day holiday from Aug. 14 to 16, as a number of organizations plan rallies.

The conservative Christian National Revolutionary Party led by Rev. Jun Kwang-hoon of the Sarang Jeil Church, a right-wing pastor known for attacks on the liberal government, reiterated on Tuesday that it would forge ahead with a series of one-man protests involving 10 million people during the three-day holiday to protest the current administration.

Under Level 4, Korea bans all types of events and demonstrations except for one-man protests.

Jun organized a controversial mass gathering on Liberation Day last August, and his Sarang Jaeil Church became the epicenter of a Covid-19 outbreak. 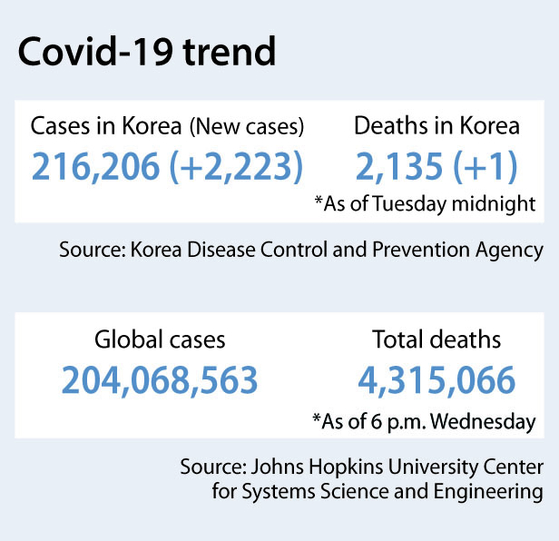 The police said rallies disguised as one-man protests are illegal, and said they will completely block the event by building barriers.

Seoul Mayor Oh Se-hoon also said that he would file a complaint against any organizers and participants for violating the Infectious Disease Prevention Act if illegal rallies are pushed ahead.

Korea has identified a total of 216,206 Covid-19 infections since the pandemic began.

One more virus death was added Wednesday, bringing the death toll to 2,135.