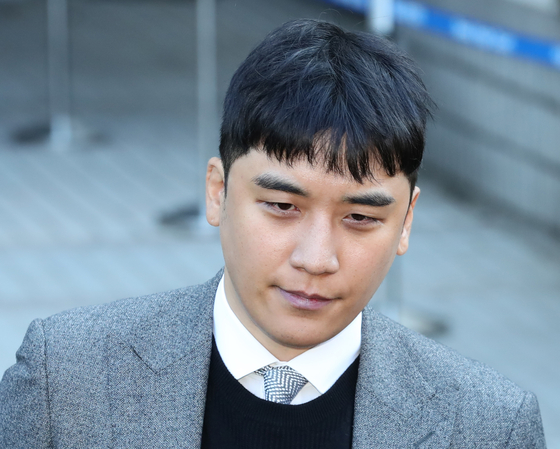 In this file photo, Seungri, former member of Big Bang, leaves the Seoul Central District Court on Jan. 13, 2020, after a warrant hearing. [YONHAP]


A military court on Thursday found Seungri, the disgraced former member of K-pop boy band Big Bang, guilty of nine charges, including offering women for sex to potential investors, gambling overseas and embezzling money from his nightclub, and handed him a three-year prison term.

The 31-year-old was immediately jailed after the general court-martial of the Army's Ground Operations Command announced the conviction and sentence.

Seungri, whose legal name is Lee Seung-hyun, was at the center of the sex, drugs and police protection scandal surrounding the Burning Sun nightclub and involving other celebrities in 2019. He debuted as a member of Big Bang in 2006 but left the band in September 2019.

In January 2020, the Seoul Central District Prosecutors' Office wrapped up its investigation into the Burning Sun scandal and indicted Seungri and 10 others.

Seungri was indicted on eight charges, including offering women for sex to investors from Taiwan, Japan and Hong Kong from December 2015 till January 2016 and also on charges of solicitation of prostitution.

He was also indicted on charges of embezzling about 528 million won ($454,000) from the Burning Sun night club.

The prosecution also indicted him on charges of habitual gambling in Las Vegas hotel casinos from December 2013 till August 2017. He reportedly spent 2.2 billion won and borrowed $1 million without notifying the government about his foreign currency transactions.

The Seoul Central District Court was originally supposed to try his case, but it was handed over to the military court after Seungri was enlisted in March 2020.

In January, the military prosecutors added another charge against Seungri and indicted him on charges of mobilizing gang members to threaten people he had gotten into a fight with at a bar in December 2015.

The military court on Thursday convicted Seungri of all nine charges and sentenced him to a three-year prison term. The court also ordered Seungri to pay 1.16 billion won that he had illegally profited.

Throughout the trial, Seungri denied most charges. Last month, the military prosecutors had asked the court to hand down a five-year prison sentence and 20-million-won fine.

"The accused conspired with [his business partner] Yu In-seok and offered women for sex to foreign investors on multiple occasions and profited from it," said Colonel Hwang Min-je, the presiding judge of the court-martial. "He commercialized sex and harmed traditional customs, exerting a serious evil influence on our society."

Colonel Hwang also said a celebrity's gambling seriously damages society's work morale. Misappropriating assets of the Burning Sun nightclub as if the money was his own private wealth and ordering gang members to threaten other people are also serious crimes, Colonel Hwang said.

Video completion suggests Big Bang will soon be back