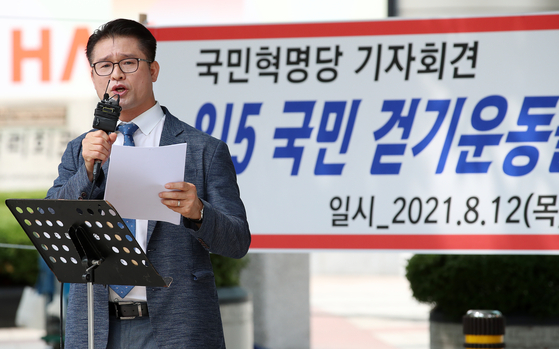 
A political party led by right-wing pastor Jun Kwang-hoon said Thursday that it will go ahead and hold a three-day street walking event to celebrate Liberation Day in defiance of warnings by the Seoul Metropolitan Government and police.

"Our street walking event, scheduled from Saturday till Monday, is a legitimate one," said Koh Young-il, deputy head of the National Revolutionary Party (NRP). "If the law enforcement authorities try to obstruct our event by calling it an illegal rally, we will file civil and criminal complaints."

Earlier this week, the NRP, led by Reverend Jun of the Sarang Jeil Church, announced its plan to hold a street walking event in central Seoul, inviting 10 million people to join. The NRP said the event is intended to celebrate Liberation Day on Aug. 15 and to call for the impeachment of President Moon Jae-in. 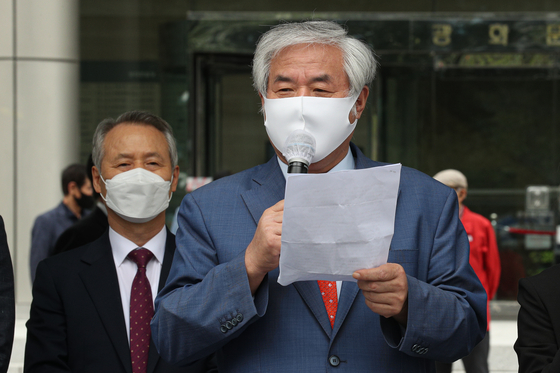 In this file photo, Reverend Jun Kwang-hoon of Sarang Jeil Church announces the launch of the National Revolutionary Party in a press conference on May 31. [NEWS1]


The party said the event is designed to respect the Level 4 social distancing measures, which bar any rallies other than a one-person protest. It said participants will maintain a 2-meter (6.6-foot) distance from one another and there will be no gathering.

The Central Disaster and Safety Countermeasures Headquarters, the police and the Seoul Metropolitan Government, however, said they will block the event, as the nation is battling the fourth wave of Covid-19 infections.

"The government will show no tolerance to illegal rallies that violate social distancing measures," Interior and Safety Minister Jeon Hae-cheol said Tuesday. "Taking into account the seriousness of the current situation, we warn the organizer to not hold the rally."

"The NRP is disguising its event as if it was a series of one-person protests, but it is still a massive rally," the Seoul Metropolitan Police Agency said in a press release. "If protesters violate the social distancing measures and hold an illegal gathering, we will physically disperse them," it said. "It there is any violent activity, we will arrest them on site and the organizer will face legal actions."

In July, the Central Disaster and Safety Countermeasures Headquarters informed the police that an event for prayer or a political party's speech are not critical for a public entity's operation, thus they will not be exempt from social distancing measures.

The Seoul Metropolitan Police Agency subsequently denied applications from 41 groups which planned to hold 316 rallies from Saturday till Monday.

Seoul Mayor Oh also said Tuesday that the city government will send 101 workers to cooperate with the police to block Jun's street walking event. "If necessary, subways will skip stops and buses will detour the area in order to stop the protesters from gathering," Oh said.

Meanwhile, Reverend Jun was indicted earlier this month on charges of holding an illegal rally last year to mark Liberation Day. The Seoul Central District Prosecutors' Office indicted him on Aug. 8 on charges of violating the Assembly and Demonstration Act and Infectious Disease Control and Prevention Act. 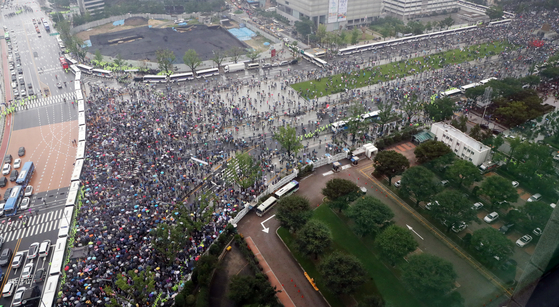 In this file photo, conservative protesters march toward the Blue House on Aug. 15, 2020. [NEWS1]


Despite a cluster infections at his Sarang Jeil Church, Reverend Jun hosted a massive rally near Gwanghwamun Station on Aug. 15, 2020.

Ahead of the Liberation Day last year, the Seoul Metropolitan Government banned rallies in central Seoul to prevent the spread of infections, but the Seoul Administrative Court granted permission to two rallies on Aug. 14, 2020.

Although the court granted one of the organizers to hold a rally with 100 people, turnout was over 20,000 and included churchgoers of Sarang Jeil Church.

Jun also tested positive for the coronavirus on Aug. 17, 2020, five days after the first infection was detected at his church and immediately spiraled out of control. He was taken to the Seoul Medical Center, received treatment and was discharged after 16 days.

Public health authorities, the administration and the ruling Democratic Party have blamed last year's conservative rallies for the resurgence of coronavirus infections.