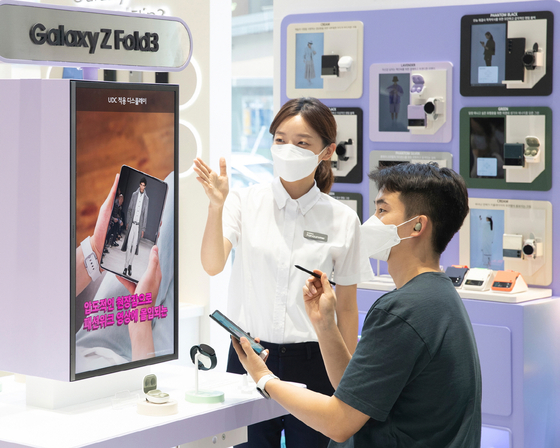 A customer tests the new Galaxy Z Fold 3 at the Samsung Digital Plaza Hongdae branch in western Seoul on Monday with the help of a staff member. Samsung Electronics will start accepting orders for its new Galaxy Z Fold 3 and Galaxy Z Flip 3 foldable smartphones for a week starting Tuesday. Sales begin on Aug. 27. [SAMSUNG ELECTRONICS]

From Aug. 17 to 23, customers can order the two new smartphone models as well as Galaxy Watch 4 smartwatches and Galaxy Buds 2 wireless earphones.

Orders can be made through digital plazas across the country, at telecom company shops, at the Samsung Electronics store and on Naver and 11st.

Those who lodge orders will start receiving their products from Aug. 24.

A bundle of benefits will be offered. Everyone ordering either the Galaxy Z Fold 3 or the Galaxy Z Flip 3 will get Galaxy Buds 2 and a discount on after-care services for a year. Phone accessories such as phone cases will also be included.

A four-month membership to YouTube Premium, a three-month subscription to the Millie online book platform, coupons for Naver Webtoons and other online benefits will follow. A lucky draw will be held and 30 customers will win two roundtrip tickets to Saipan.

SK Telecom will offer a maximum 1.03-million-won discount ($885) to customers who pay with the Samsung Card and a maximum 500,000-won rebate for turning in their old phones.

KT will rebate 50 percent on the next purchase of a high-end smartphone for those who buy one of the foldables offered and use it for 24 months.

LG U+ will hold a lucky draw for 100 million won of merchandise. Three people will get Dior Micro Saddle Bags, five people will receive the Samsung Galaxy Tab S7 FE, eight will win Louis Poulsen’s Floor Lamps and other prizes will be offered.

Samsung introduced the new models on Aug. 11 promising that the new products will be more durable and affordable.