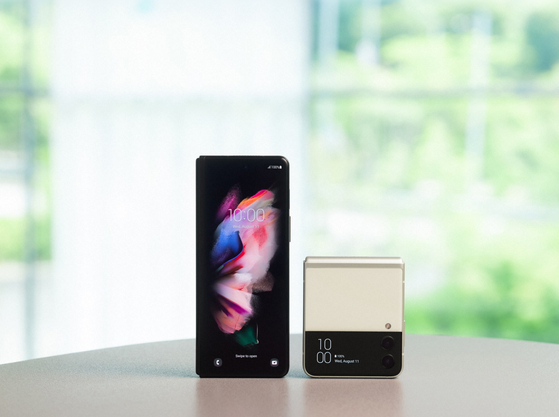 
Samsung Electronics' newest foldable phones racked up sales of more than one million, which means foldables are now part of the mainstream, according to the company.

Sales of Galaxy Z Flip 3 and Galaxy Z Fold 3 models surpassed 1 million only 39 days after their release on Aug. 27. This is the third fastest passing of the 1 million milestone after the Galaxy Note 10 in 2019, which took 25 days, and the Galaxy S8 series of smartphones in 2017, which took 37.

Samsung Electronics get 920,000 orders during the presale period between Aug. 17 and 23. That surpassed “market expectations by far,” according to the company, which led to delays in deliveries of models for customers both in and outside of Korea.

A Display Supply Chain Consultants (DSCC) report released last month said that the Galaxy Z foldables will be the best-selling smartphones of 2021.

"These attractive products are backed by a reported $2 billion spend by Samsung [Electronics] in promotions and marketing which are significantly increasing consumer awareness of foldable smartphones,” DSCC CEO Ross Young wrote.

When folded, the Galaxy Z Flip 3 turns into a smaller square and is especially popular with women in their 20s and 30s, Samsung Electronics said. Slightly more than half — or 54 percent — of buyers were millennials and Generation Z.

The Galaxy Z Fold 3, on the other hand, has a spacious screen of 7.6 inches when open, making it popular among those looking for a more intensive user experience. The phantom black model is the most popular.

“This is thanks to the phones being made sturdier, topped with unique functions, as well as marketing strategies that were aimed at the millennial and Generation Z consumers,” Samsung Electronics said.

A fifth of the orders came through stores or online shopping malls, not phone companies. Those buyers sign up for phone plans afterward. Of those purchases, 58 percent were online.

Samsung Electronics is already selling the foldables in 40 countries and said it will expand that number to 130 by the end of October.