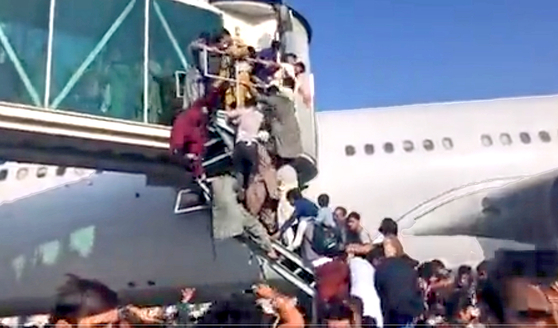 Mayhem at the airport in Kabul on Sunday as people try to evacuate out of the country after the Taliban forces swept into the Afghan capital. [SCREEN CAPTURE FROM A TWITTER ACCOUNT]

After the Taliban swept into Kabul on Sunday, the Korean Embassy in the Afghan capital shut down and moved most of its personnel to a country in the Middle East.

“The ambassador remains, with two other staff members, but most have been evacuated to a third country in the region,” said an official of Korea’s Foreign Ministry on Monday.

Korea's decisions were made as the situation on the ground evolved with incredible speed on Sunday.

Korean Ambassador to Afghanistan Choi Tae-ho was actually on the phone with Foreign Minister Chung Eui-yong when Taliban forces swept into the city, according to the ministry. Choi received multiple reports from sources and allied governments about the Taliban's arrival, and was advised to evacuate as soon as possible. Afghan President Ashraf Ghani was reported to have flown out of the country Sunday.

“The minister decided to pull the Korean diplomats out of Kabul, except the personnel necessary to help a Korean national evacuate,” the ministry official said. “This was the last Korean citizen left in the country, apart from the diplomats.”

Since May, the ministry had repeatedly asked Korean nationals in Afghanistan to leave. In late June, a few ministry officials visited Afghanistan and met with remaining Koreans there to ask them to leave as soon as possible.

Koreans have been banned from traveling to Afghanistan without government approval since 2007. All Korean nationals are required to gain a permit from the government to stay in the country, which needs to be renewed every three months or so.

The evacuation of the final Korean national will be aided by the U.S. government.

“The situation on the ground is tense, with checkpoints set up everywhere, and we’ve been told that movement on the ground is nearly impossible,” said the official. “As we understand it, U.S. military helicopters are able to lift people from where they are to the airport and from there out of the country.”

As the security situation on the ground in Kabul on Sunday was reported to be unstable, the U.S. Embassy issued a statement telling U.S. citizens to take shelter until further notice for evacuation.

The U.S. government announced Sunday that it would expand its security presence to nearly 6,000 troops in the next two days to help fly out thousands of American citizens, as well as Afghans employed at the U.S. mission in Kabul and their families.

Seoul and Washington had signed an agreement earlier in the year in which the U.S. agreed to provide military assets to assist Koreans’ evacuation out of the country in a case of emergency, according to the Foreign Ministry.

The evacuation of Korean diplomats on Sunday was aided by the U.S. government and other allies, according to the ministry.

President Moon Jae-in on Monday ordered his aides to “evacuate the Koreans, diplomats and ordinary citizens, to the last person, safely out of Afghanistan,” according to presidential spokesperson Park Kyung-mee.

Whether the Korean mission to Afghanistan will continue its operations in another country remains to be seen.

“We are assessing the evolving situation carefully, and speaking with our allies, to make our next moves,” said the ministry official. 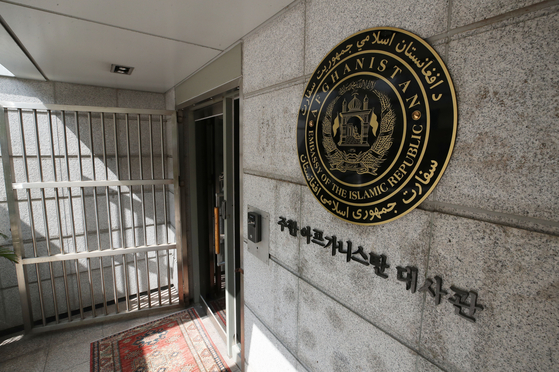 The Embassy of Afghanistan in Korea in this photo taken on Sunday, when the Taliban forces swept into the Afghan capital Kabul and declared victory. [YONHAP]

'Ant' investors get jittery as Covid-19 cases tick up again