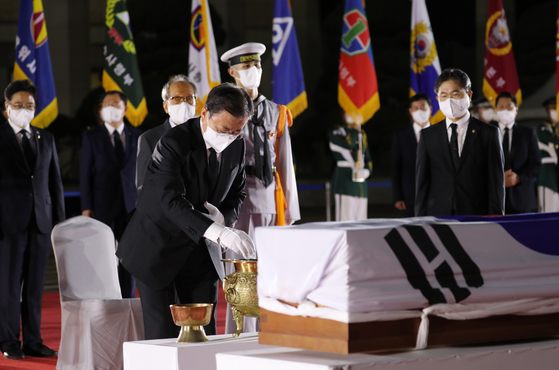 President Moon Jae-in pays respects to the remains of Hong Beom-do, a heroic Korean independence fighter repatriated from Kazakhstan 78 years after his death, at Seoul Air Base in Seongnam, Gyeonggi, in a late-night ceremony Sunday, coinciding with Liberation Day. [YONHAP]


The remains of Hong Beom-do, a revered Korean independence fighter, were repatriated from Kazakhstan late Sunday, coinciding with Liberation Day, 78 years after his death.

President Moon Jae-in and first lady Kim Jung-sook received the remains at Seoul Air Base in Seongnam, Gyeonggi, in a late-night ceremony.

Hong (1868-1943) served as a commander of the Korean Independence Army during Japan's 1910-45 colonial rule. He is especially known for his heroics leading the Korean independence troops to victory in the Battle of Fengwudong against Japanese forces in Manchuria, currently located in Jilin Province in northeastern China, in June 1920. This battle is considered the first major victory in Korea’s struggle for independence from Japan.

Hong later lived in Primorsky Krai, or the Russian Far East, until he was forced to relocate to Kazakhstan under Soviet leader Joseph Stalin's deportation of Koreans in 1937.

Hong died at the age of 75 in Kazakhstan in October 1943, just ahead of Korea’s liberation from Japan with the end of World War II. He was buried at a cemetery in Kyzylorda, Kazakhstan.

A presidential delegation led by Minister of Patriots and Veterans Affairs Hwang Ki-chul was dispatched Saturday to retrieve Hong’s remains from Kazakhstan. The delegation also including ruling Democratic Party Rep. Woo Won-shik, who leads a foundation commemorating Hong, and actor Cho Jin-woong, who starred in films on Korea's independence movement.

His remains arrived in a wooden coffin covered with the Taegeukgi, or Korean national flag, and were carried by military officers and received by an honor guard and a military band in a show of utmost respect for the late independence fighter.

Moon was spotted with tears in his eyes as he watched the arrival of Hong’s remains and lit an incense to mourn the late general.

The body was then transferred to Daejeon accompanied by a motorcade.

Hong’s remains will be buried at the Daejeon National Cemetery next Wednesday following an official mourning period conducted both virtually and in-person. 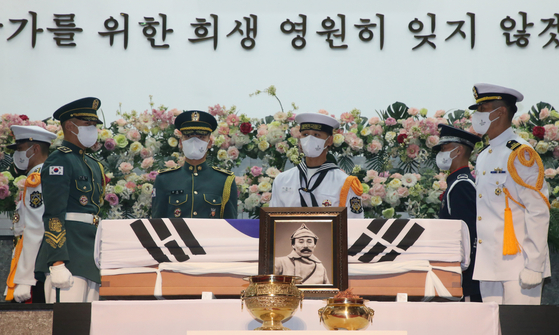 A coffin carrying the remains of Hong Beom-do, a commander of the Korean Independence Army during Japan's 1910-45 colonial rule, arrives at Daejeon National Cemetery Monday after returning from Kazakhstan Sunday night. His remains will be buried at the cemetery in Daejeon Wednesday after an official mourning period conducted both virtually and in-person. [NEWS1]


Moon told the special delegation upon their return with Hong's remains, "This is a very meaningful return to us,” according to the Blue House Monday.

The president said that it would be natural for the Koreans in Kazakhstan to feel sad about sending off Hong's remains and asked for follow-up measures such as building a park to commemorate the late independence fighter.

The repatriation of Hong’s body coincides with a two-day state visit by Kazakhstan’s President Kassym-Jomart Tokayev over Monday and Tuesday. Moon will hold a summit with Tokayev Tuesday to discuss expanding substantive bilateral cooperation, reciprocating a trip made by the Korean president to the Central Asian country in April 2019.

The trip was initially planned for last year, which would have marked the 100th anniversary of the Battle of Fengwudong, but it was delayed because of the Covid-19 pandemic.

Moon plans to posthumously present Hong with the Order of Merit for National Foundation in a ceremony during Tokayev's visit Tuesday.

Moon in his Liberation Day address Sunday morning said Hong “spearheaded historic victories at the battles of Fengwudong and Qingshanli” and later “became a spiritual anchor for the ethnic Koreans that migrated to Kazakhstan.”

He continued, “I am very pleased that my administration’s diplomatic efforts to repatriate Hong's remains have come to fruition. I am deeply grateful to Kazakh President Tokayev and the Korean diaspora there for all of their cooperation, both emotionally and materially.”

Moon said that including Hong, 144 patriotic independence activists have been returned to their homeland including patriotic martyrs Yun Bong-gil and Lee Bong-chang in 1946.