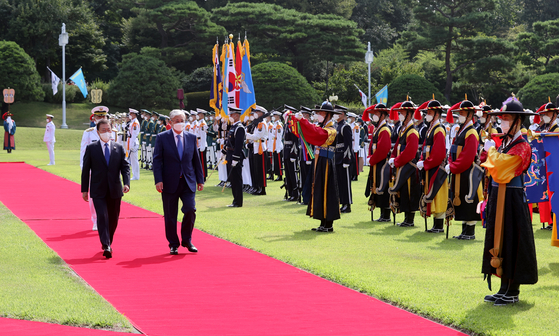 President Moon Jae-in, left, and Kazakhstan’s President Kassym-Jomart Tokayev are greeted by an honor guard in a welcome ceremony held at the Blue House in central Seoul Tuesday. The Kazakh president was on a two-day state visit for a summit with Moon and is the first foreign leader to make a trip to Korea since the beginning of the Covid-19 pandemic last year. [NEWS1]

After Moon greeted Tokayev in a welcoming ceremony at the Blue House in central Seoul, the two leaders held summit talks and adopted a joint statement with measures to strengthen bilateral cooperation in 24 areas.

The Kazakh president is the first foreign leader to visit Korea since the beginning of the Covid-19 pandemic last year.

Moon told Tokayev at the beginning of talks, “Kazakhstan is Korea's largest trading partner and investment destination in Central Asia, and an important partner in the New Northern Policy,” referring to his administration’s initiative to establish stronger economic cooperation with the Russian Far East, Northeast Asia and Eurasia.

Tokayev said, “Korea is one of Kazakhstan's most important partners in Asia.”

Moon said in a joint press conference after the talks that the two sides agreed to bolster cooperation for the fourth industrial revolution in areas such as the use of big data and the commercialization of 5G networks. They also agreed to strengthen cooperation in the health sector and space industry.

The two leaders further agreed to closely cooperate in Covid-19 response and in global issues such as climate change.

Bilateral trade between the two countries reached a record high of $4.2 billion in 2019, triple the amount in 2017.

The two sides agreed to hold commemorative projects to encourage vibrant people-to-people and cultural exchanges in 2022, designated as the year of mutual cultural exchanges, to commemorate the 30th anniversary of the establishment of diplomatic ties between South Korea and Kazakhstan.

The two leaders confirmed the importance of diplomacy and dialogue based on the commitments between the two Koreas and the United States for the denuclearization of and the establishment of peace on the Korean Peninsula, and agreed to work closely with the relevant countries to resume talks as soon as possible.

Tokayev reaffirmed his support for the South Korean government's efforts to advance the peace process on the Korean Peninsula. 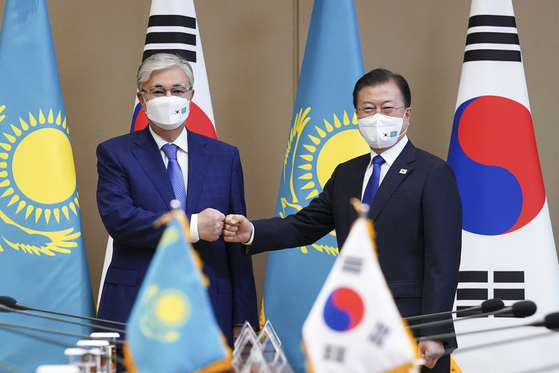 
“Kazakhstan is a country we are grateful to for warmly embracing the relocation of our Korean compatriots 80 years ago,” said Moon in the joint press conference. “Today, more than 100,000 Korean compatriots contribute to the national development of Kazakhstan and serve as a bridge that connects our two countries closer.”

He referred to Soviet leader Joseph Stalin's forced deportation of Koreans from the Russian Far East starting in 1937. Some 172,000 Koreans eventually settled in Kazakhstan.

Referring to the ethnic Koreans in his country, Tokayev said, “These people are contributing a lot to the cooperation between Kazakhstan and Korea. We highly appreciate Korea as a key partner and plan to develop this relationship in the future.”

Tokayev noted that over the past 15 years, Korean investors including Samsung, Lotte and Posco have invested more than $6 billion into Kazakhstan. There are over 550 Korean companies active in Kazakhstan.

Tokayev said there has been a surge in the sales of Hyundai and Kia vehicles in Kazakhstan and added he is especially interested in the assembly and construction of electric vehicles (EVs) and the production of EV batteries, as well as Korea’s hydrogen vehicle technology.

He noted that there is a lot of potential in the agricultural and mining industries in Kazakhstan, including for rare minerals, and a strong demand in the innovation sector, namely the telecommunications and pharmaceutical sectors.

In the IT and digital field, Tokayev said that Kazakhstan is interested in e-government, an electronic payment system and fintech.

Moon also posthumously awarded the Order of Merit for National Foundation to Korean independence fighter Hong Beom-do in a ceremony at the Blue House attended by Tokayev.

Hong (1868-1943) served as a commander of the Korean Independence Army during Japan's 1910-45 colonial rule and is especially known for his heroics leading the Korean independence troops to victory in the Battle of Fengwudong against Japanese forces in Manchuria, currently in northeastern China, in 1920.

Hong lived in the Soviet Union until he was forced to relocate to Kazakhstan and died there in 1943. He was buried at a cemetery in Kyzylorda, Kazakhstan.

The late general’s remains were repatriated from Kazakhstan Sunday, on Liberation Day, ahead of Tokayev’s visit.

Moon expressed his gratitude, saying that the return of the remains is a “symbolic event to further develop the relationship” between the two countries. He also received relics related to Hong from Tokayev.

Tokayev said that "historical events have strengthened cooperation between the people of our two countries,” adding that the repatriation of Hong’s remains was “a sign of mutual trust and support.”

He also announced Kazakhstan’s decision to open a consulate general in Busan, calling the outcome of the summit “an important historical day for our country.”

Tokayev also attended a Korea-Kazakhstan business roundtable and a state banquet hosted by Moon, wrapping up his visit to Seoul.