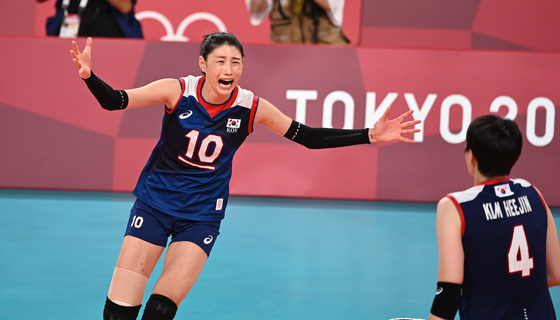 Kim Yeon-koung reacts after defeating Turkey in the women's volleyball quarterfinal match at the 2020 Summer Olympics on Aug. 4 in Tokyo. [JOINT PRESS CORPS]


The International Olympic Committee plans to display the national team uniform that Kim Yeon-koung wore during the 2020 Tokyo Olympics at the Olympic Museum in Lausanne, Switzerland.

Kim, who announced her retirement from the national team last week, dedicated the best part of 20 years to Korean volleyball, rising through the ranks from an exceptionally talented high school student to a seasoned veteran and the talismanic captain of the squad.

She first wore the Taeguk mark in 2004 at the Asian Junior Women's Volleyball Championship. Then, in 2005, when she was still a student at Suwon Hanil Girls High School, Kim was called up for her first senior match at the FIVB Volleyball World Grand Champions Cup.

This year, she captained the national team to reach the semifinals at the Tokyo Games for the first time since the 2012 London Games, marking her last time on the big stage. Throughout her career, Kim has appeared at three Olympics, four Asian Games and three World Championships with the national team, captaining it throughout many of those tournaments.

On Friday, the International Olympic Committee posted the news of Kim's retirement on their social media page with a video combining clips of her from the London, Rio and Tokyo Games, thanking her for her dedication to the sport.

According to reports, Thomas Bach, the president of the International Olympic Committee(IOC), personally asked the Korea Volleyball Association for the uniform that Kim wore in Tokyo. The uniform will be displayed in the Olympic Museum located near the IOC headquarters.

During the Tokyo Olympics, Bach attended the women's volleyball quarterfinals match between Korea and Turkey on Aug. 4, alongside Ary Graca, the head of the Fédération Internationale de Volleyball. While captaining the team, Kim scored a total of 28 points that day, the most of the match, to earn Korea a ticket to the semifinals.

"The IOC recognizes Kim's true value as a world star and what she has done for the sport," said Korean Volleyball Association Chairman Oh Han-nam.

Although her international career is over, Kim will continue to play league volleyball. She will be playing in China next season with Shanghai Bright Ubest Women's Volleyball Club, returning to the team four years after she led it to the top of the Chinese Super League in the 2017-18 season to snap a 17-year drought.