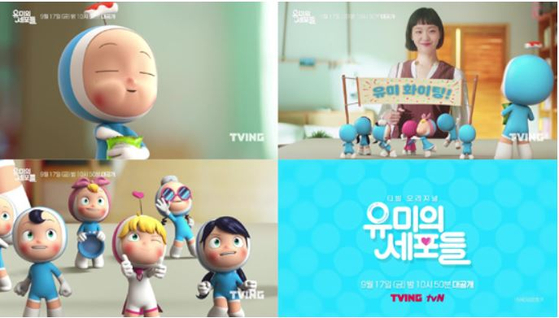 
On Wednesday, CJ ENM’s OTT platform Tving unveiled the first teaser image and a video clip of its upcoming drama series “Yumi’s Cells,” based on the popular webtoon of the same name.

The teaser image shows the webtoon’s lovable characters in 3-D cheering for actor Kim Go-eun, who will be playing the lead character Yumi. Yumi is an ordinary hard-working employee who is great at her job, but somewhat naïve when it comes to relationships.

The teaser video begins with Kim reading the webtoon on her tablet. She then receives a text from Goo Woong, Yumi’s boyfriend, asking her out on a date. As Yumi gets up to get ready for her date, the cells all decide to jump out from the tablet screen to help her pick a dress to wear.

Written by author Lee Dong-geun, the webtoon “Yumi’s Cells” came to an end last year after five years and seven months. A total of 512 episodes were uploaded on Naver Webtoon. With a total of 3.2 billion views, the webtoon is one of Naver Webtoon’s most popular series.