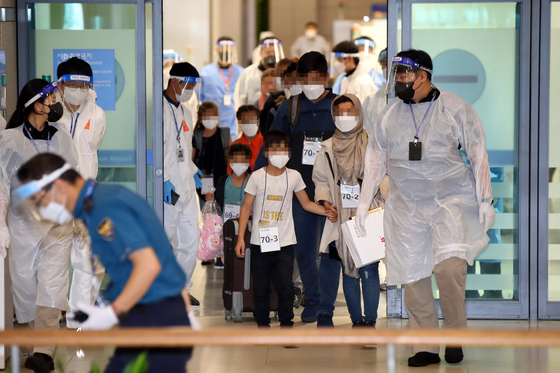 Afghan evacuees arrive at Incheon International Airport on Friday. After a first group of 377 arrived on Thursday, the Korean military completed its evacuation operation on Friday by bringing in a second group of 13 . [YONHAP]


Korea completed the evacuation of Afghans who supported its activities in their homeland, dubbed “Operation Miracle," by airlifting a total of 390 people over a three-day period.

A second batch of 13 Afghans were airlifted from Islamabad, the capital of Pakistan, Thursday evening and arrived at Incheon International Airport on Friday. The first group of 377 Afghans arrived on Thursday.

While the government announced Thursday that a group of 378 arrived in Korea, the actual number was 377, the Foreign Ministry said Friday. In total, 390 Afghans were evacuated to Korea.

According to the ministry, 391 were initially airlifted from Kabul on two military aircraft on Wednesday and arrived in Islamabad. When their identifications were scrutinized once again during the stopover, the government discovered that one person was not on its evacuation list.

“That person was sent back to Kabul through a military aircraft and handed over to the U.S. military,” the Foreign Ministry said.

The first group of 377 was comprised of people from 76 families. Adults numbered 146 and minors 231. Among the minors, 110 are under the age of six, according to the Ministry of Justice.

Upon their arrival, the first group took the polymerase chain reaction (PCR) tests for Covid-19 at the airport and 360 tested negative. The results for the other 17 were borderline, but the government decided to quarantine them all together at the training center of the National Human Resources Development Institute (NHI) in Jincheon, South Chungcheong. The 17 will take another test within 24 hours of the initial test.

According to the ministry, all the evacuees will be quarantined at the Jincheon facility for two weeks according to the government’s social distancing measures. After they are released from quarantine, they will stay at the facility for about six more weeks to prepare for settlement in Korea.

The government created a team of 40 Justice Ministry workers and 12 disinfection workers to operate the facility. A medical team of doctors and nurses dispatched from the Justice Ministry’s Correctional Bureau and the Ministry of National Defense will reside in the facility to support them.

The police also dispatched a unit and the Justice Ministry also sent 14 guards to monitor the facility.

The ministry will offer Korean language, culture and law and order programs to help the evacuees’ settle. Financial support will be decided later through discussions within ministries.