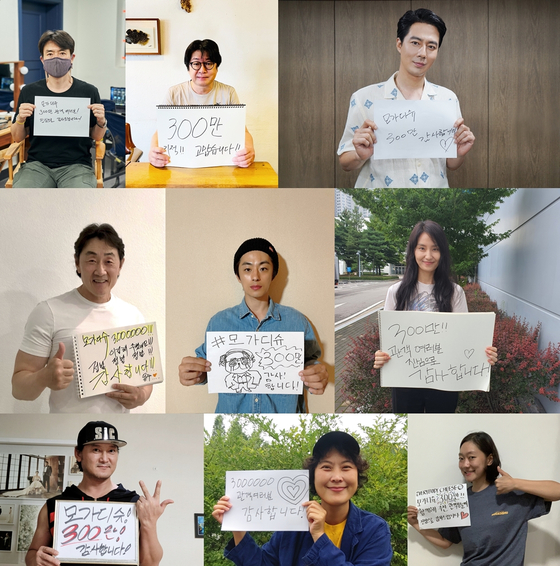 Director Ryu Seung-wan, top left, and the stars of the film ″Escape from Mogadishu″ hold signs celebrating that the movie has sold more than 3 million tickets as of Sunday. [LOTTE ENTERTAINMENT]


“Escape From Mogadishu,” an action film by director Ryu Seung-wan, has pulled in 3 million viewers as of Sunday, according to its distributor Lotte Entertainment. It is the first movie to reach the milestone among the local and foreign films released in Korea this year.

Celebrating that “Escape From Mogadishu” made it to the 3-million-ticket threshold despite the severe impact of the Covid-19 pandemic on the film industry, director Ryu and the actors who star in the movie, including Kim Yoon-seok, Zo In-sung and Huh Joon-ho, posed with signs thanking the audience for watching the film in a collage of photos released by Lotte.

The film is based on the true story of stranded North and South Korean embassy workers who came together to escape the Somali Civil War in Mogadishu in 1991.

The movie tells the story of how the embassies of the two Koreas, which had been competing to win approval from the Somali government to be admitted to the United Nations from the late 1980s, band together to escape the country in the midst of chaos as a civil war breaks out in Somalia in 1991.