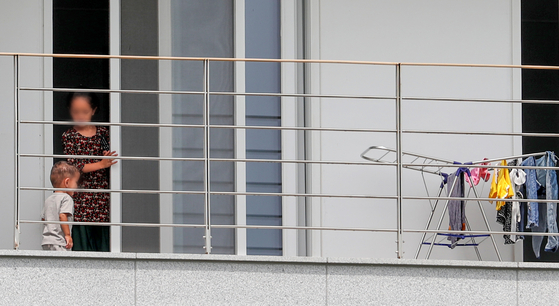 Two Afghans are pictured Sunday on a balcony of a facility in Jincheon County, North Chungcheong, where the evacuated Afghans are staying quarantined for two weeks, after which they will start a procedure to settle in Korea. The Korean government evacuated 390 Afghans out of Kabul last week. They are people who have worked with the Korean government and their families. [NEWS1]


Four Afghans evacuated out of Kabul and flown to Korea tested positive on Saturday.

The four people are a man and a woman, a 10-year-old boy and an 11-year-old girl, none of whom are related, according to the Justice Ministry.

They were part of 377 Afghans who arrived in Korea on Thursday, after the Korean government decided to evacuate a total of 390 Afghans — around 70 of whom had worked with the Korean government in Afghanistan, and the rest of their immediate family members including spouses, young children and parents — from Kabul. The second group with the remaining 13 Afghans arrived on a flight on Friday.

The four who tested positive were part of a total of 17 whose PCR tests at the airport on Thursday yielded borderline results. The 17 were kept quarantined at the training center of the National Human Resources Development Institute in Jincheon County, North Chungcheong, and tested again on Friday, after which the four were confirmed positive.

The four and their immediate family members — the fathers of the two children, and an infant child of the woman — were moved to a treatment center as of Saturday.

The Justice Ministry said all members of the four patients’ families — 21 total — were also tested once more, and that their results will be out by Monday.

All of the evacuated Afghans are to be quarantined at the Jincheon facility for two weeks, keeping with the government’s social distancing measures. After they are released from quarantine, they will stay at the facility for about six more weeks to prepare for settlement in Korea.

These Afghans will eventually be granted F-2 long-term residency visas by the Justice Ministry because of their "special contributions" working for Seoul's embassy in Kabul or on Korean humanitarian aid projects in Afghanistan. This will require a revision to the current immigration law, which the ministry is working on currently.

Thousands of Afghans have been evacuated out of Kabul in recent weeks, since the fall of Kabul to Taliban forces on Aug. 15.

While many more still await their evacuations, a Korean diplomat who has taken part in the recent evacuation effort to bring the 390 Afghans to Korea spoke with the press about the operation.

“At the time, we didn’t know whether or how we’d be able to come back to Kabul to airlift the people out of the city,” said Kim Il-eung, the minister counsellor of the now-shuttered Korean Embassy in Kabul, speaking with a group of reporters on Friday. “But we were determined to make it happen, and that was all we thought about.”

These Afghans include medical professionals, IT experts, interpreters and other local staff who worked for the Korean Embassy in Afghanistan, the Korea International Cooperation Agency (Koica), the Korean Hospital in Bagram, the Korean Vocational Training Center and a provincial reconstruction team in Charikar, for anywhere between one and 10 years.

But there were times when the ministry and its officials weren’t so sure whether the operation would live up to its name.

For one, Kabul fell to the Taliban earlier than they had expected.

“We had thought that the Afghan government would hold out for another three months,” an official of the ministry told a group of reporters on Aug. 16. “So we were also taken aback by how speedily the turn of events came. But we have not given up on our plan to fly out the local citizens who have worked with us for years.”

With the fall of Kabul, the Korean Embassy shut down its mission on Aug. 16 and flew out most of the embassy staff members. Kim and the ambassador of Korea to Afghanistan, Choi Tae-ho, and one other staff member stayed behind one more day to help the last Korean national in the country evacuate.

“We knew that to fly the Afghans out of the country we had to go back in, because there had to be a foreign diplomat on the ground to communicate with the Taliban and confirm the identification of the Afghans,” Kim said. “So when we left Kabul, we were most concerned about whether we’d be able to fly back to the city.”

Kim, another diplomat, a member of the Korean police force and a military attaché based in the United Arab Emirates were able to fly back on Aug. 22. They had the diplomatic papers ready for 390 Afghans, issued by the Korean government.

“Most of these locals don’t have passports, so we needed to have travel certificates issued by the Korean government,” Kim said. “Usually, these travel papers are issued for Korean citizens only, but the government made an exception in this case and issued the papers for the Afghans.”

Kim and the three others had to wait inside the Hamid Karzai airport while the Afghans, being transported on four buses, were to pass through the main gate of the airport. The Korean government had communicated with the U.S. military, who had control over parts of the airport, to reach an agreement with the Taliban to let these buses inside the airport when they arrive at the main gate at 3:30 p.m. on Aug. 24.

Outside, there they were — 390 Afghans packed in four buses with the windows painted so no one could see in or out, sitting just outside the main gate to the airport at 3:30 p.m.

But the Taliban didn’t budge. The electronic copies of the travel certificates that the Afghans had with them were not good enough.

“The Taliban wouldn’t let them through, saying that they needed to see the originals of the travel certificates,” Kim said. “The bus was not air-conditioned, and people were packed inside, many with young infants, not knowing their fate. That was the hardest moment for all of us.”

After some 14 hours of back-and-forth communications, Kim tried to make his way out of the airport with the travel certificates. Hearing this, the Taliban decided to let the buses through.

When the Afghans got off the bus early in the morning on Aug. 25, Kim was the first familiar face they saw.

“Some of them were people that I had worked with in 2011 and 2012, when we were working together on building hospitals and education centers in Charikar,” Kim said. “There were some translators and other familiar faces. It was a relief to see them.” 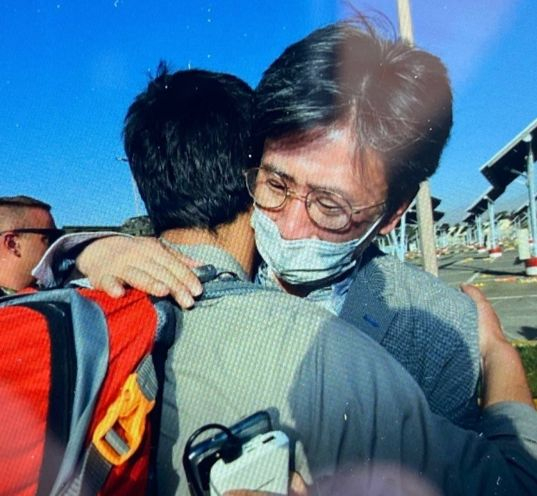 Kim Il-eung, minister counsellor of Korea to Afghanistan, embraces an Afghan with whom he had worked with before, at the airport in Kabul on Aug. 25. The photo has been provided by the Ministry of Foreign Affairs. [NEWS1]


During this time, Kim’s family had no idea Kim was back in Kabul.

“I didn’t want to alarm my family, so I didn’t tell them [before leaving for Kabul],” Kim said. “But they saw me on the news and, yes, they were pretty upset. But I am glad and thankful to hear that the Afghans have made it safely to Jincheon and that they have actually been quite welcomed by the locals. All in all, when the operation was over, we were so thankful that we could bring all of the 390, and contribute to the international efforts to bring these Afghans to a safe place.”

The Korean Embassy in Qatar has taken over the work of the Korean mission to Afghanistan for now.

One Afghan citizen who was evacuated out of Kabul by the Korean government said, upon arriving in Islamabad for the transfer flight to Incheon on Wednesday, “It was not an easy decision, but I had to — to save my family, I decided to come and talk with the embassy and save me and my family members’ lives.”