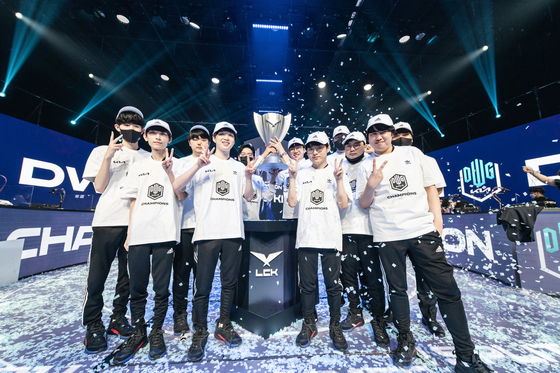 
Whether or not a given team qualifies as a dynasty is always a contentious matter regardless of the sport. When the candidate can boast not only a world championship win but also a domestic threepeat, however, their case becomes nigh impossible to argue against.


In Korean League of Legends history, 2020-2021 will now go down as the DWG KIA era. Last Saturday, the two-time defending champions took down challengers T1 in a convincing 3-1 victory in the 2021 League of Legends Champions Korea Summer Split finals, becoming the second team in LCK history to win the title three times in a row.

The night also crowned DWG KIA head coach Kim "kkOma" Jeong-gyun as the first person to ever win LCK a whopping 10 times — a record he and his former mid laner Lee "Faker" Sang-hyeok, who had also been gunning for his 10th win at the finals, were in competition for. In the post-match broadcast interview, kkOma said he was elated at having reached the milestone, but also took care to pay respect to Faker, saying that winning 10 titles as a player is "far more difficult" than doing it as a coach.

It was also the sixth LCK title for DWG KIA's veteran top laner Kim "Khan" Dong-ha, who has been adamant about his plans to retire at the end of this season due to conscription. His legacy as the best top laner in the league's history is now more than secure. After the finals, Khan said he was very happy to have won his final split in the LCK, and vowed to end his career on a high note by performing well at the coming World Championship "no matter what it takes."

Finals MVP was awarded to ace Heo "ShowMaker" Su. While he has long been properly recognized as one of the best mid laners in the world, if not the best, a very neat narrative knot was tied on Saturday: ShowMaker has now beaten all of his domestic mid lane rivals — Jung "Chovy" Ji-hun, Kwak "Bdd" Bo-seong and Faker — in an LCK finals. In the post-match interview, he said was happy to receive the honor, although it was a shame that it didn't go to Khan, who would not have another chance at the accolade.

The first game made for an energetic start to the night. T1 went for a full batch of comfort picks, placing Kim "Canna" Chang-dong on Gwen, Moon "Oner" Hyeon-joon on Viego and Faker on Azir. DWG KIA, on the other hand, opted for strong meta picks, taking Camille for Khan Dong-ha and Trundle for Kim "Canyon" Gun-bu. Both players had piloted their respective champions well this split, but only once.

Things were fast-paced and both teams took turns taking the lead, but Khan's strong performance on Camille and ShowMaker's standout side lane play on Ryze eventually led to a win for DWG KIA.

Canyon put on a one-man show on Olaf in the following game, relentlessly ganking top to force-feed Khan's Camille an advantage over Canna's Gwen. The T1 top laner responded to Canyon's incessant visits remarkably well, managing to at least take someone with him each time he fell prey to a gank. The problem was that while Olaf and Camille were becoming unstoppable, T1 were not scoring any points on the other side of the map. Canyon was later able to convert his massive lead into a victory for his team.

With the score at 2-0, Lee "Gumayusi" Min-hyung was subbed in for Park "Teddy" Jin-sung. This bode well for T1's chances of getting back into the series; while Teddy was hardly to blame for either of their losses, T1 tend to play at a slower tempo with him on the Rift. Playing the younger bot laner would help T1 switch up their approach to the game, which clearly had not been working so far.

T1 did end up winning Game 3, but it was less about Gumayusi's introduction and more about DWG KIA's overly confident draft, in which Canyon and ShowMaker picked Diana and Kassadin together and Jo "BeryL" Gun-hee last-picked Seraphine. While DWG KIA did have some impressive moments, T1 was able to press their compositional advantage to claw back into the match.

The beginning of the fourth game went very smoothly for T1, with Faker's Ryze and Canna's Gragas exerting strong control over their lanes and the team working well towards a snowball win. Yet due to three consecutive mistakes from Ryze and a series of jaw-dropping displays from ShowMaker's LeBlanc, DWG KIA were able to steal a comeback victory and call an end to the finals.

According to broadcast metrics provider Esports Charts, the finals pulled in 1,315,659 concurrent viewers across the world, excluding Chinese platforms. This number dwarfs by 400,000 the second-most watched match this year — the summer split semifinals between T1 and Gen.G, which pulled in 907,873 viewers — and is by far the highest viewership count in recent LCK history.

In terms of gameplay, too, the finals turned out to be one of the most entertaining in recent years, with neither team playing to the outdated but still too frequently utilized approach of risk minimization. Until the very end, both sides were confident in taking chances no matter how behind they were in a game.

Riot Games Korea chose to hold the match at the CJ ENM Studio in Ilsan, Gyeonggi, which did not allow for a live audience or proper press access. The curious choice of venue was presumably made in order to debut a new stage design involving mixed reality graphics for the finals.

While some creative ideas indeed featured on the night, whether the overall optics were a huge improvement over LoL Park's usual setup was debatable. Furthermore, the pre-match trash talk segment between the two teams' players was poorly scripted, the customary musical act was omitted and the prerecorded quiz show aired between sets was irrelevant to the actual finals taking place.

Purely in terms of production value, it was one of the least inspiring finals in LCK history — a cause for real concern, considering this is the league's first year of franchising. Many of those who have long followed LoL esports across multiple regions hold the opinion that Korea's broadcast is rapidly slipping behind the curve, particularly compared to the constantly innovating LoL European Championship (LEC).

DWG KIA, Gen.G Esports and T1 are through to the upcoming World Championship, but Korea's final representative is yet to be decided. From Tuesday to Thursday, Nongshim RedForce, Liiv Sandbox and Hanwha Life Esports will face off in the regional qualifiers for the last ticket to Worlds 2021.