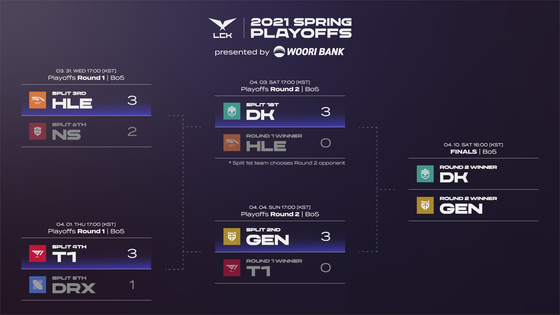 
The 2021 League of Legends Champions Korea Spring Split playoffs are winding down, with only the finals remaining.

Here's how the action has gone so far.

On Wednesday evening, Hanwha Life Esports, who finished third in the regular season, kicked off the postseason by scraping together a thoroughly unconvincing 3-2 victory over sixth-place Nongshim RedForce to advance past the first round.

The match had been expected to be a blowout, with 87 percent of fan predictions leaning toward Hanwha Life. Expert opinions followed the same lines — on an episode of the LCK Global official podcast, "The POG State," all four of the league's English commentators called Nongshim's chances dire, forecasting an easy victory for HLE.

Nongshim, however, outperformed expectations across the board, whereas Hanwha Life's Kim "Deft" Hyeok-gyu looked subpar the entire night.

The match went down to the wire, and had it not been for substitute jungler Park "Arthur" Mir, who came off the bench for Game 5 and put on a heroic 4/0/11 display on Hecarim, Hanwha Life may not have been able to close.

On Thursday, fourth-place T1 — who had been looking unstoppable as of late, bouncing back dramatically from their woeful season start to lead the league in most early-game performance indicators — extended their strong run of form by smashing past rookie squad DRX, who had finished the regular season in fifth, 3-1.

Most fans and analysts saw the blowout coming: Prior to the series, all 11 LCK on-air talent predicted T1 would advance.

Pre-match assessments had focused on the mismatch in the bottom lane, as well as the dizzying gap in experience between T1's veterans and DRX's rookies. Both concerns were later validated on the rift — as the series progressed, Park "Teddy" Jin-sung and Ryu "Keria" Min-seok began running circles around DRX's bottom duo, while Song "Solka" Soo-hyung increasingly struggled to keep up with Lee "Faker" Sang-hyeok's tempo.


The brackets for the second round were finalized the same evening, when first-place DWG KIA exercised their right as the top-ranked team to choose HLE as their opponent in Round 2, thus sending T1 to face second-place Gen.G.

On Saturday, reigning world champions DWG KIA secured their spot in the finals by comfortably dismantling Hanwha Life 3-0. HLE came into the match with some fresh strategies despite having had less than three days to prepare, but as expected, such curveballs proved ineffective against the best team in the world.

HLE did prove their mettle by grabbing an early lead in all three games — large ones, in fact, in Games 2 and 3 — but DWG KIA were able to bounce back no matter the deficit, thanks to their refined macro and unparalleled understanding of compositional power spikes.

Individual form was a deciding factor in the series.

While Arthur surprisingly held his own against regular-season MVP Kim "Canyon" Gun-bu, HLE's usual one-two punch of Chovy and Kim "Deft" Hyeok-gyu showed uncharacteristically poor displays, and neither Morgan nor Oh "Vsta" Hyo-seong could step up to the occasion.

DWG KIA, on the other hand, looked as sharp as usual. Some lapses of judgment were made, but none lasted long enough to cost a game — even in Game 3, where the team was down 3k gold at 15 minutes, DWG KIA were able to force a comeback through standout performances from Heo "ShowMaker" Su's trademark Zoe and Jo "BeryL" Gun-hee's LEC-inspired Cho'Gath.

On the other side of the bracket, Gen.G took down T1 on Sunday in an unexpected 3-0 blowout.

The two teams had been thought to be evenly matched, with most experts making predictions in T1's favor based on recent form. Gen.G mid laner Kwak "Bdd" Bo-seong, however, delivered the performance of his career to turn the match into a one-sided affair.

Both teams started the series with conservative drafts, but had slightly different aims: T1 opted for a well-rounded composition with a smooth power curve, while Gen.G sacrificed some lane priority to ensure a late-game advantage. Gen.G's choice turned out to be prescient, as T1 made critical missteps in the early game, allowing their opponents to scale at leisure to a rare deathless victory.

The next game saw both sides adjusting strategies, with T1 fully committing to a poke composition and Gen.G focusing on securing lane priority on the bottom half of the map. The two approaches looked to be evenly matched, but Bdd's stunning back-to-back performances on Syndra shattered the balance.

In Game 2, Bdd took complete control over the map from the midgame onward, landing clutch skillshots left and right. In Game 3, he completely extinguished T1's early-game momentum by solo-killing Lee "Faker" Sang-hyeok at a crucial moment. T1 looked dazed afterwards, and Bdd and Co. handily closed out the series to advance.

While DWG KIA remain the favorites for the title — by both sheer name value and regular-season form — it would not be surprising if the finals were a very close match. DWG KIA and Gen.G went dead even in the regular season, with the former winning 2-1 in January and the latter making it even in March.

The winner will represent LCK at the coming Mid-Season Invitational, the international tournament second in prestige to only the World Championship. Last year's MSI was cancelled due to the Covid-19 pandemic, but this May, Spring Split champions from around the globe will gather in Reykjavik, Iceland to play at the indoor sporting arena Laugardalshöll, albeit without a live audience.

DWG KIA's players have been vocal about their desire to qualify for MSI — for last year's world champions, the tournament represents an opportunity to extend their international dominance. Gen.G, on the other hand, will be keen to end their seemingly perennial domestic title draught — the team's last LCK trophy dates back to 2014 Spring, when they were owned by Samsung.