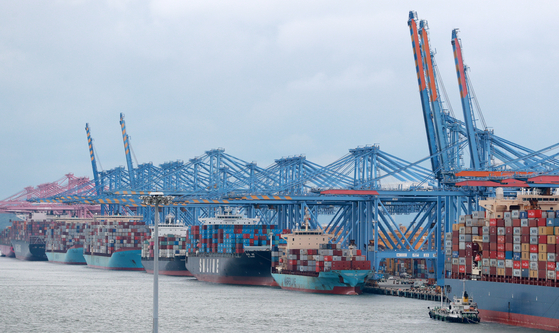 Export goods in cargo containers being loaded onto ships scheduled to travel aboard at the port in Busan on Wednesday. Exports in August grew 34.9 percent. Exports have been growing for 10 consecutive months. [YONHAP]

Exports rose 34.9 percent in August on year to $53.2 billion, according to the Ministry of Trade, Industry and Energy on Wednesday.

In the first eight months of the year, total exports were $411.9 billion. It is the first time in which the $400 billion mark was reached in eight months.

The achievement raises the possibility of Korea’s exports hitting a record full year. 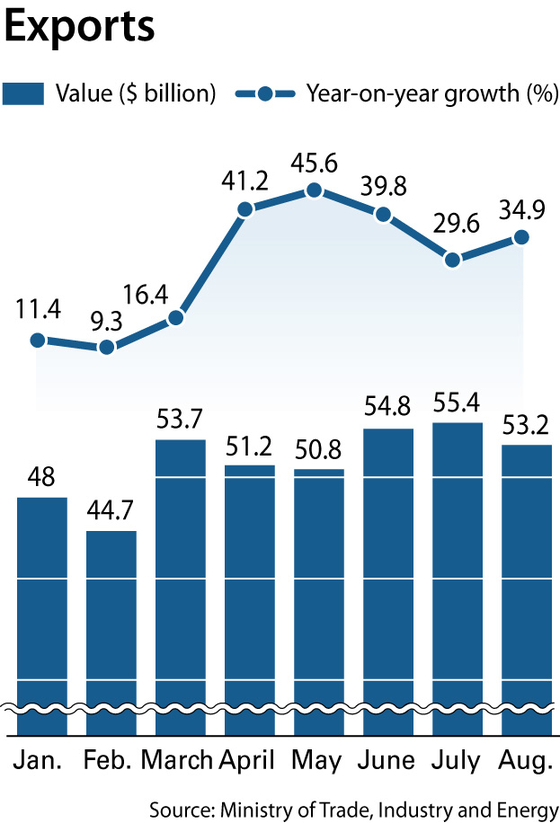 Imports increased 44 percent in August on year to $51.6 billion, resulting in a $1.7 billion trade surplus. This is the 16th consecutive month in which trade has been in the black.

The ministry said that global trade is in recovery but warned that risks remain.

“There are worries over risks including the spread of the variants and volatile raw material prices,” said Moon Dong-min, deputy minister for trade and investment, referring to Delta and other Covid-19 variants.

August’s exports were led by semiconductor exports, up 43 percent year-on-year to $11.7 billion as demand for computer chips remained strong.

Exports of semiconductors in August hit a record. Semiconductor exports increased for 14 consecutive months, and the rate of increase has been double digit for five months.

Wireless telecommunication equipment exports were up 62.2 percent year-on-year to $1.4 billion helped along by the rollout of new phones.

Exports of wireless communication devices to China surged 375.9 percent in part due to the sale of devices from Samsung Electronics.