NFTs are the key building blocks for the metaverse

NFTs are the key building blocks for the metaverse 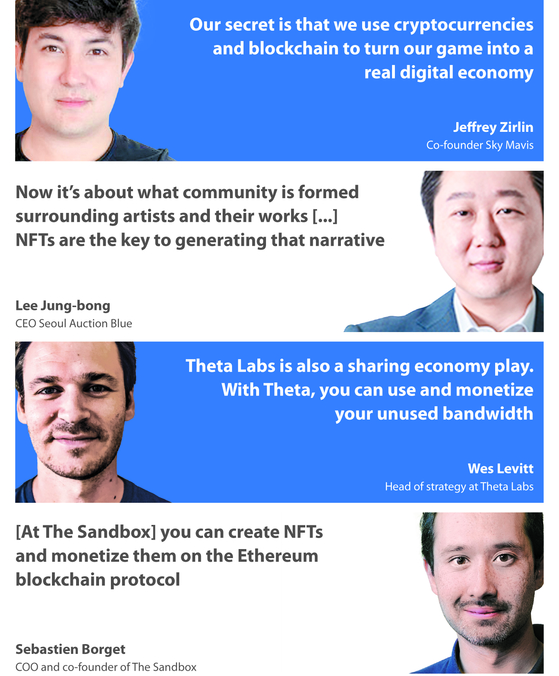 Non-fungible tokens (NFTs) are the key to forming and sustaining the digital economy in the virtual metaverse space, according participants at the Upbit Developer Conference (UDC) 2021 held online on Wednesday.

An NFT is a blockchain-based proof of digital asset ownership that can't be replaced with something else.

The concept is rapidly gaining traction in the arts, games and entertainment field, with NFTs used as digital representations of the ownership of real-world arts, music, video clips and even in-game items that are often available in limited quantities. In short, it is a non-hackable and automated digital receipt of transactions.

These NFTs are crucial in building a virtual economy, or a digital nation, in metaverse, according to conference participants, mainly due to the security that NFTs ensure for owners in an environment where transactions of digitally-owned assets are made between avatars.

One game that has adopted NFTs to build a digital nation is play-to-earn game Axie Infinity, developed by Vietnamese game-developer Sky Mavis. Users can breed Axies, Pokemon-like monsters in this game, or win in battles with them in order to win rewards in cryptocurrency. Each Axie is an NFT.

“At its core, we think Axie is about economic freedom,” said Jeffrey Zirlin, co-founder of Sky Mavis during his session at the UDC 2021. “Our secret is that we use cryptocurrencies and blockchain to turn our game into a real digital economy. There are people all over the world earning money through playing this game, even ditching their jobs in the real world to turn full-time creators on Axie.”

Zirlin described the game as a "digital nation that has its own economic system and rules," adding Sky Mavis is not just a game developer, since players within Axie create their very own games and share them with others, the company provides a nation where each player is the king in their own right.

The concept of play-to-earn has gained massive popularity recently with daily active users of the game ballooning from 30,000 in April to over 1 million in August. The company's revenue during the past 30 days soared to $149 million.

Asked on his thoughts about reports the Philippines government has started taxing income from Axie Infinity, as people actually start to make living out of the game, Mavis said the company has recently issued a statement asking users to abide by the laws of the home country and that the company is "willing to teach governments why it is good for governments to embrace these kind of games."

The Sandbox also uses NFTs in shaping the metaverse world.

The Sandbox, published in 2012, is a popular game that allows maximum freedom of its players with the potential as a metaverse space. Like Axie, it lets players build their own games and create their own avatars, but The Sandbox has “land” lots that can be bought and sold with cash, like real estate in the physical world.

“You start by owning land and you can create NFTs and monetize them on the Etheruem blockchain protocol,” said Sebastien Borget, COO and co-founder of The Sandbox. “Here, you play to earn. You can turn your play time and resources as you complete each quest and reach victory within a game. You can then sell them on the marketplace and take ownership.”

The future of gaming, according to Borget, will come from players taking ownership of the assets and currency earned within games. Contrary to traditional games, where cash is spent on games but not returned to the real world, players benefit from the time they’ve spent on games.

“A lot of job opportunities are here on The Sandbox, ranging from designing virtual concerts, fashion, architecture to real estate agents and tour guides,” Borget said. “Here, everything is more than just an idea. Anyone who spends time gets to derive revenue through the activities and in games."

The ultimate goal of The Sandbox is to give the sense of governance to its users, he said. By owning land and gaining higher profit from their activities, users spend more time on the platform and that returns to more reasons for others to join in.

NFTs are also used outside the gaming world, such as Theta Labs, which encourages people to share their internet bandwidth and memory storage in return for NFTs.

Theta Labs is a video delivery network that uses blockchain technology. It runs its own livestreaming platform Theta TV. But above all, it provides other video platform operators the technology to reduce their transmission costs by using the leftover internet bandwidth or memory storage that users have on their devices, whether that be mobile phones or computers.

Users, on the other hand, get the incentives to share their leftover data assets by getting their hands on NFTs of content as the reward.

"On Airbnb, you can share unused housing, or Uber, you can use unused vehicles to improve the efficiency of the usage," said Wes Levitt, head of strategy at Theta Labs. "Theta Labs is also a sharing economy play. With Theta, you can use and monetize your unused bandwidth or compute power on any device. Users earn their cryptocurrency as an incentive to contribute any source that other users may have use of."

NFTs can also be used to create new communities of artists and fans, something that’s ironically harder to visualize in the real world.

“It takes mere seconds for artists to have their work sold on blockchain protocols,” said Lee Jung-bong, CEO of Seoul Auction Blue.

Seoul Auction Blue is an online auction house that has been one of the key players in the NFT art market in Korea.

Rather than creating a work, waiting for it to be exhibited at a gallery and waiting several weeks or months for a buyer to come and get feedback through news articles or other collectors, selling directly to consumers online and seeing their reaction gives artists the energy needed to create more work.

NFTs in the art world not only prevent piracy or forgery for creators but also act as a non-hackable digital receipt that proves the ownership of a work for collectors.

After purchasing an NFT, a community is also formed around it, adding new value to the artwork.

“In the past, it was about what artists made and how much they sold at," Lee said. "Now, it’s about what community is formed surrounding that artists and their works, and what stories are generated afterward based on that. NFTs are the key to generating that value and narrative."

I can see clearly now