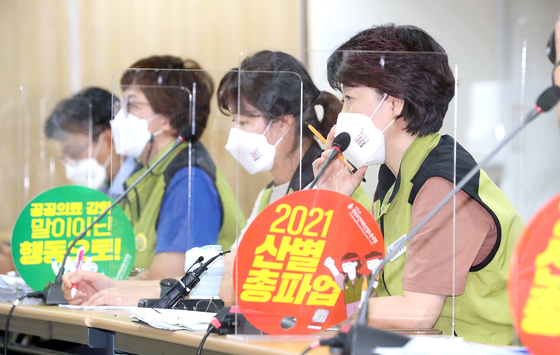 Lee Seon-hee, chief vice president of the Korean Health and Medical Workers' Union, speaks during the last-ditch talks with the Ministry of Health and Welfare at the Korea Institute for Healthcare Accreditation in Seoul on Wednesday. [NEWS1]


Unionized nurses and other health care workers held last-minute negotiations with the government Wednesday afternoon on key issues ahead of the union's planned strike starting at 7 a.m. on Thursday.

The Ministry of Health and Welfare and the Korean Health and Medical Workers' Union (KHMU) have previously held 12 rounds of negotiations during the past three months. Although they have reached a general consensus on the bigger picture, there were differing opinions on some costly key issues such as an expansion of public health care resources and infrastructure as well as improved working conditions.

Last Friday, the union said they polled its members and found nearly 90 percent of the votes cast were in favor of the strike.

The warning of the strike comes as the union has continuously demanded improvements in the poor working conditions and hefty workloads that have been exacerbated by Covid-19 pandemic, but no follow-up measures have been announced yet.

Before starting the last-ditch effort to reach an agreement at 3 p.m. Wednesday, Prime Minister Kim Boo-kyum said, “I'm grateful and sorry to all of you for making all kinds of sacrifices at a time where the damage for by the pandemic will be big if we lose vigilance for a second.”

“I ask you to make a broad decision," Kim said. "If you reach an agreement and carry it out, the government will keep its promise."

“Regarding the issues that have yet to be solved, the director-general for health and medical policy will engage in the negotiation faithfully on the behalf of others,” Health Minister Kwon Deok-cheol said. “The regular parliamentary session began today, and if there is anything that hasn’t been put in the government’s budget, we will include it in the parliamentary process.”

Lee Chang-joon, director-general for health and medical policy of the ministry, said in an opening statement, “The government’s position is [to make an agreement] by listening to the difficulties of the workforces on the front lines against Covid-19 and prevent the recurrence of such problems even if a new infectious disease ever occurs.”

“If the negotiations fail, it would be difficult to prevent a general strike," Song Keum-hee, secretary general of the union, said. “We believe the Health Ministry is present with a prospective negotiation proposal, and we hope the government will suggest a proposal that will stop us from leaving patients behind."

“We also didn’t expect [the negotiations] would end after just one or two tries,” she added. “We believe today is really the last negotiation.”

“The medical front line also hopes that the negotiations can end well without having to go on strike,” said Lee Seon-hee, chief vice president of the union. “We hope that a medical system will be established to respond well to infectious diseases that create a medical disruption like this."

The negotiations were ongoing as of the newspaper's closing time at 8 p.m. Wednesday.


If negotiations fail again, the union plans to stage a strike from 7 a.m. Thursday, with about 16,800 members — or 30 percent of the union — participating, excluding the essential personnel such as those in emergency rooms and intensive care units.

Doctors also will not take part in the action, but concerns have been voiced that such a strike could strain the country's health care system as the country battles its worst wave of Covid-19.