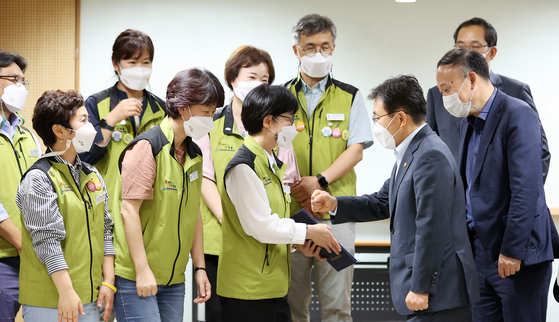 Na Soon-ja, president of the Korean Health and Medical Workers' Union (KHMU), exchanges a fist bump with Health Minister Kwon Deok-cheol on Thursday after reaching an agreement to avoid the planned strike. [NEWS1]


Korea's unionized nurses and other health workers called off Thursday’s planned strike after a dramatic last-minute deal with the government, avoiding a vacuum in medical services as the pandemic rages on.

The Korean Health and Medical Workers' Union (KHMU) said it reached an agreement with the Ministry of Health and Welfare in their last-ditch talks held from 3 p.m. Wednesday until early morning on Thursday, just five hours before their general strike starting at 7 a.m. on Thursday.

The union, representing around 56,000 nurses, medical engineers and hospital employees, previously warned of a strike as no follow-up measures had been made following continuous demands for improvements in the poor working conditions and hefty workloads that have been exacerbated by the Covid-19 pandemic.

The government and the union held a total of 13 rounds of negotiations over the past three months. Although they did reach a general consensus on the bigger picture, there were differing opinions on some costly key issues such as an expansion of public health care resources and infrastructure as well as improved working conditions.

Upon the union's request, the ministry agreed to set up detailed guidelines on nurse deployment depending on the severity of Covid-19 patients by the end of this month, and to revise the law in order to pay subsidies to medical personnel treating contagious diseases, to go into effect in January 2022.

They also agreed to establish a ratio of recommended nurses per patient, expand the number of nurses who train newer nurses, and increase payment for nurses working overnight.

“We have established a basis to overcome the exploitation of the medical personnel,” the union said. “This will be a new turning point to establish personnel guidelines for each job to improve chronic staff shortages and poor working conditions.”

President Moon Jae-in also expressed his appreciation for withdrawing the strike plans, saying, “The agreement will serve as an opportunity to strengthen the public health sector and to strengthen the health care system,” according to Park Kyung-mee, the presidential spokesperson.

Moon also called upon the government to cooperate with the parliament and with the union to improve the public health care infrastructure and working conditions.

Although the union reached an agreement with the government, some hospital unions still staged their own walkout on Thursday to demand more personnel and better working conditions.