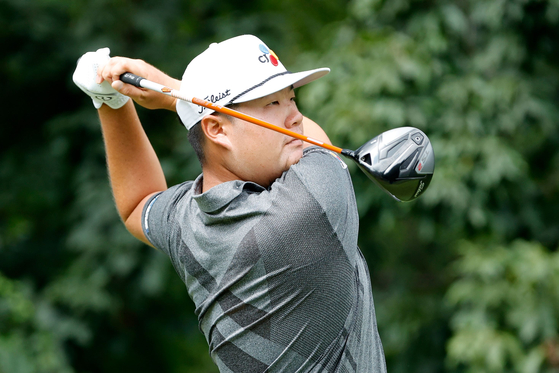 Im Sung-jae plays his shot from the second tee during the final round of the BMW Championship at Caves Valley Golf Club on Sunday in Owings Mills, Maryland. [AFP/YONHAP]


Im Sung-jae will be the sole Korean golfer competing for the season's ultimate prize at the Tour Championship at East Lake Golf Club in Atlanta, Georgia on Thursday.

Im is the first Korean to earn a spot in the Tour Championship, which is only open to the top 30 golfers on the FedExCup standings, for three consecutive years.

Countrymen Lee Kyoung-hoon and Kim Si-woo narrowly failed to extend their season, Lee taking a painful 31st place, one shy of getting into the top 30, with Kim taking 34th.

No Korean golfer has ever won the FedExCup since its launch in 2007, with K.J. Choi being the highest finisher in fifth place during the inaugural year.

The best Im has done was an 11th-place finish last season. In 2019, he was 19th on the final standing and was named Rookie of the Year.

Im hopes that commuting from his Atlanta home works to his advantage this time.


“It is very comfortable to sleep at home,” Im said at a pre-tournament interview. “It’s been a year since I moved in. I had wished to play the Tour Championship while commuting from home and now, it’s a dream come true to be able to do so.”

“I want to do my best. I want to have better scores than last year and the year before. The Tour Championship is full of world-class players but I will make sure I do my best by competing well with them.”

Im heads to the course on the back of his best performance this season. Last week’s solo third finish is his best result this year and his third best career performance.

Im has one PGA title to his name, the Honda Classic in March, 2020. After that win, Im finished third at the Arnold Palmer Invitational the following week. If he can build similar momentum on the back of the BMW Championship last week, he could once again launch a legitimate challenge to the higher-ranked golfers.

The Tour Championship contenders start with a score already bolstered by their FedEx Cup standings. No. 1 Patrick Cantlay is in pole position starting the tournament 10 under, runner-up Tony Finau 8 under and No. 3 Bryson DeChambeau 7 under. No. 12 Im will start the tournament at 3 under alongside four other players including defending champion Dustin Johnson.

“It’s cool to have a chance to compete,” Im said. “In my rookie year here, I was so amazed by the players I got to play with. Now, I wish to be in Atlanta every year. That's my new goal.”

The FedExCup champion will earn $15 million, the largest prize pot in golf. The elite 30 will start their race to the ultimate prize on Thursday. Im will tee off at 1:10 p.m. alongside Collin Morikawa of the United States.