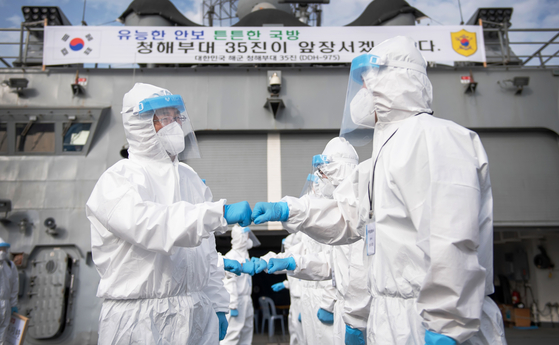 
The South Korean military will begin to deploy new weapons systems and significantly upgrade its technological capabilities in response to South Korea's shrinking population and the North's development of nuclear weapons, including a ballistic missile as destructive as a tactical nuclear weapon, according to the Defense Ministry's 2022-2026 defense plan which was released Thursday.

It is expected that 315.2 trillion won ($271.8 billion) will be spent achieving the plan, the military's five-year blueprint for upgrading its arsenal.

A highlight of the plan is a surface-to-surface missile that can carry a 3-ton warhead and fly up to 400 kilometers (248 miles), which is in the final phase of development.

The plan comes after the United States agreed to lift Cold War-era restrictions on South Korean missile technology in May, following a summit between President Moon Jae-in and U.S. President Joe Biden.

The plan would also re-organize the armed forces to reflect the rising significance of technology and the military's declining pool of eligible men to serve.

However, with the elimination of the 6th and 8th Army Corps, the number of Army Corps will be reduced from eight to six, while the number of divisions will decrease from 35 to 33.

The Army will also establish a missile brigade to enhance its precision strike capabilities. In the event of a security crisis, a rapid response division has been established to carry out missions on the Korean Peninsula.

In its announcement, the Defense Ministry said, "We will strengthen our operational capabilities with upgrades in artillery, armor, engineering, and aviation, and further strengthen our combat capabilities by introducing advanced equipment such as the warrior platform and drone combat systems."

The "warrior platform" is a defense project to upgrade the equipment of individual troops to increase their survivability and enhance their combat abilities, turning them into "cutting-edge scientific technology soldiers," as described by former Army Chief of Staff Gen. Kim Yong-woo at a press conference in February 2019.

Such equipment includes a ballistic helmet, combat and night vision goggles and an infrared designator used to distinguish friend from foe.

The Army will also deploy the K-9 Thunder self-propelled 155 mm howitzer with automatic firing capabilities, which will enable more destructive and rapid firing with a small number of ground troops.

The Defense Ministry plans to add unmanned defense systems, such as reconnaissance and attack drones and operational support robots to Army units in anticipation of mixed human-robot combat scenarios.

Meanwhile, the Navy will establish the 7th Mobile Fleet as the Mobile Fleet Command, with its own Air Command based in the 6th Fleet.

The Mobile Fleet Command, which will be composed of three taskforces, will expand its operational scope to the deep sea to protect maritime traffic routes. The Navy’s Air Command will introduce and operate maritime patrols and helicopters with enhanced flying distances.

The Navy will be provided with more 3,000-ton submarines capable of firing submarine-launched ballistic missiles (SLBMs), the first of which it received earlier this year. The Navy will receive three more Aegis-equipped destroyers, the main combat ships of the mobile fleet, and develop a 6,000-ton "mini-Aegis" destroyer.

The Aegis Combat System is a U.S. naval weapons system that uses computer and radar technology to track and guide weapons to destroy enemy targets.

A light aircraft carrier, the deployment of which is planned for the early 2030s, will be at the eventual head of the Mobile Fleet Command.

The Defense Ministry added, “We are considering installing an appropriate interceptor missile in time for the next Aegis ship in order to secure its ballistic missile response capability.

The Air Force will also be reorganized into a unit structure that maximizes its aerospace and joint operations capabilities while maintaining the current command structure, which encompasses 13 fighter wing and five battalions.

KF-16 and F-15K fighter jets with improved precision strike capabilities will be deployed to the Air Force to enhance its air superiority in combat situations.

The Defense Ministry added that the force will obtain next-generation indigenous fighter jets – the KF-21 developed by Korea Aerospace Industries – as soon as they enter mass production, which is expected to begin in 2026.

Reflecting the country’s demographic decline, the number of standing troops will be gradually reduced from 618,000 in 2017 to 500,000 by next year.

The Ministry of National Defense explained that the number of civilian workers working in the non-combat field will also gradually expand from 32,000 in 2017 to 62,000 in 2026.