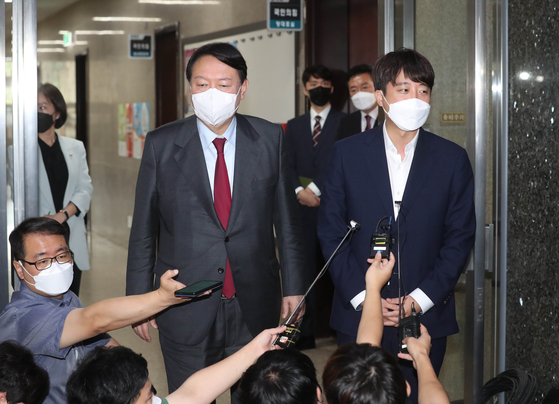 
Former Prosecutor General Yoon Seok-youl is facing snowballing allegations that he ordered a high-ranking prosecutor to prepare criminal complaints for the opposition party against pro-government figures ahead of last year's general election.

Newsverse, an online news outlet, reported last Thursday that Son Jun-sung, then chief of investigative information policy at the Supreme Prosecutors' Office, provided criminal complaints to Kim Woong, a former prosecutor who was running for a seat in the National Assembly for the United Future Party (UFP), ahead of the general elections on April 15, 2020. The UFP is the precursor of the main opposition People Power Party (PPP).

Son, now a human rights protection official at the Daegu High Prosecutors' Office, was a key aide to Yoon, who is currently the PPP's leading presidential contender.

Kim, currently a first-term lawmaker with the PPP, allegedly relayed the documents to his party's legal officials, though the UFP did not lodge the complaints.

The criminal complaints against 11 individuals, including several journalists and political figures affiliated with the ruling Democratic Party (DP), accused them of violating the public office election law and the promotion of information and communications network act. These individuals included five MBC reporters; staff at online media outlet Newstapa; Rhyu Si-min, chairman of the Roh Moo-hyun Foundation; and Choe Kang-wook, head of the liberal Open Democratic Party.

Newsverse revealed screen captured excerpts of the complaint sent over encrypted messaging app Telegram to further back the allegations. The screen captures showed the name Son Jun-sung as the sender of the message. The messages between Kim and Son were dated April 3 and April 8 of last year.

Kim reportedly sent a message through Telegram saying the chat room should be deleted. It was unclear if the sender's name alone could prove Prosecutor Son's involvement.

Rep. Kim likewise has claimed he "doesn't remember" the details, saying he received many documents during that period.

On Monday, Kim again said, "I don't remember because it was a long time ago."

He said in a statement that most documents that came his way were forwarded to his party, but there was "no way to confirm whether the complaint was actually received, or who received it."

Kim likewise said on his message for the Telegram chat room to be deleted that it is "routine to protect the identity of the informant."

Son in turn Monday denied the allegations that he had conveyed the complaints to Rep. Kim, calling them "not true at all," and told journalists he will take legal measures to respond to "unfounded" reports.

PPP chief Lee Jun-seok and Yoon, who have been at odds over the party's primary procedures, held a previously unscheduled hour-long meeting Monday morning at the National Assembly but did not discuss the prosecutor complaint allegations.

Yoon speaking to reporters after the meeting accused the ruling party of political maneuvering and "creating a frame" against him when asked about the allegations.

He added, "Isn't it political maneuvering in itself that I was being isolated during my time as prosecutor general and some political prosecutors and the ruling party were communicating and handling investigations?"

Lee said in a PPP supreme council meeting, "As the election approaches, the negative offensive against our candidates and the party is intensifying. We will review establishing an organization to actively protect and verify our candidates."

The ruling DP on Monday called for the immediate resignation of Yoon as a presidential candidate amid the allegations against him.

Song Young-gil, the head of the DP, said in a meeting of his party's supreme council, "The possibility of collusion between the prosecution and the opposition party is becoming clearer." He urged the Supreme Prosecutors' Office to launch a full-fledged investigation rather than an internal probe.

Ruling and opposition lawmakers likewise clashed over the issue in a parliamentary judiciary committee inquiry Monday afternoon to address whether Son had conveyed the letter to Kim, and whether Yoon had any involvement in this process.

Opposition lawmakers questioned whether there was a need to examine what they described as a "tabloid-like report," while ruling party representatives shot back that the allegations of prosecution intervention should not be downplayed.

Justice Minister Park Beom-kye told the parliamentary judiciary committee that additional measures, "such as a joint inspection by the Justice Ministry and the Supreme Prosecutors' Office, will be considered," depending on the results of the internal probe.

Minister Park told reporters Monday morning that the allegations are "a matter of interest to both the public and to politicians," adding he hopes the Supreme Prosecutors' Office will "reveal the truth swiftly and strictly."

When asked whether the Ministry of Justice will respond to the matter, Park said, "Initially, it is under the jurisdiction of the Supreme Prosecutors' Office, so we are closely monitoring it," adding that his ministry will "make an effort to confirm facts" where its involvement is needed.

A civic group on Monday filed a complaint with the Corruption Investigation Office for High-ranking Officials (CIO) to investigate the allegation that the prosecution instigated the opposition party to file criminal complaints against ruling party figures under Yoon's tenure as prosecutor general.

The civic group filed the CIO complaint against Yoon, Son and two other prosecutors with alleged involvement, for abuse of power and violation of the public office election law.