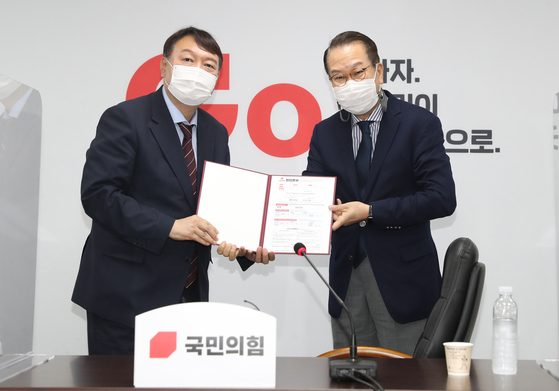 Yoon submitted an application to join the PPP during a meeting with Rep. Kwon Young-se, chief of the party’s external relations committee, at the party's headquarters in Yeouido, western Seoul.

“In order to change the government, I thought it would be fair and square to join the main opposition party and start from the primary,” said Yoon. “I decided to join the party thinking that by doing so, the PPP could receive greater and more universal support from the public.”

There had been much speculation on when Yoon would join the PPP, and his decision came sooner than expected. Yoon met with Lee Jun-seok, chair of the PPP, over drinks last Sunday.

Yoon said he made the decision to join “just a few hours ago.”

“I was concerned that continued uncertainty about joining the party would cause confusion and be a hindrance,” he said.

Yoon added that many believed he would have to run as a candidate from the main opposition party because “the PPP inevitably has to be the axis for a change in government.”

A small welcome ceremony, taking into consideration Covid-19 restrictions, was held without PPP head Lee, who was traveling outside of Seoul, or Kim Gi-hyeon, floor leader, who was on vacation.

Yoon said, “Now that I have become a member of the party, I will change the things that need to be changed and work to broaden the confines of the party and win more people's support than in the past.”

Yoon stepped down as prosecutor general in early March, just four months ahead of the end of his two-year tenure, in protest of the government’s prosecutorial reforms.

On June 29, Yoon declared he would be running in the presidential election on March 9. He registered his candidacy with the National Election Commission (NEC) on July 12 as an independent.

The PPP will hold an elimination round on September 15 to select eight candidates to run in its main primary. Including Yoon, there are 12 conservative presidential hopefuls.

Yoon was welcomed by new party member Choe Jae-hyeong, another conservative presidential contender and former head of the Board of Audit and Inspection (BAI).

Choe said Yoon joining the PPP, "greatly alleviated the concerns of party members and the people who aspire to change the government."

Choe joined the PPP on July 15 and registered his candidacy with the NEC last Monday, formally starting his presidential run.

Another contender, former lawmaker Yoo Seong-min, welcomed Yoon through a Facebook post, while Jeju Gov. Won Hee-ryong called for a team effort “for a final candidate that can be recognized by all the people through fierce competition."

While Yoon has been leading in popularity polls, his ratings has taken a hit over scandals related to his wife and mother-in-law in recent weeks.

Yoon’s mother-in-law was convicted of fraud and medical law violations linked to her hospital business and sentenced to a three-year prison term at the beginning of the month. 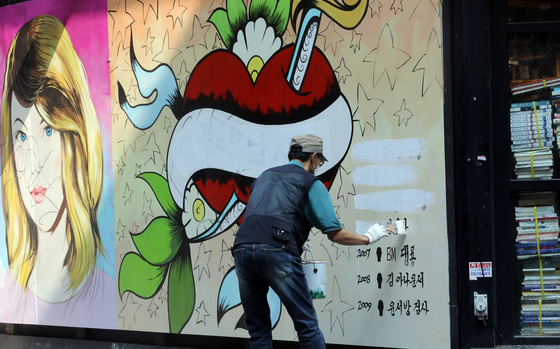 A mural entitled “Julie's men” painted on a bookstore wall in Jongno District, central Seoul, seen to be disparaging former Prosecutor General Yoon Seok-youl’s wife, has been receiving backlash from Yoon’s supporters. A man covers up the list of high-profile men she has been rumored involved with in the past with white paint Friday. [NEWS1]


A mural depicting Yoon’s wife, Kim Keon-hee, painted on the outer wall of a used bookstore in Jongno District, central Seoul, has been criticized by his supporters and conservatives for being crude and misogynistic.

The mural entitled “Julie's Men” shows a woman meant to represent the candidate's wife, described with the words: “The dream of Julie! The dream of becoming the first lady!” It includes a written list of seven high-profile men rumored to have been involved with Kim over the years, including “Husband Prosecutor Yoon.” The other six men are described by their professions and surnames.

The mural alludes to a document called "Yoon's X-file" that has spread via the internet in past weeks. It contains a series of unfounded allegations about Kim, including that she worked as a hostess nicknamed Julie at a hotel nightclub in southern Seoul before marrying Yoon. Kim has denied those rumors.

Yoon’s supporters attempted to block the mural by parking vehicles in front of the wall Thursday. The bookshop owner who commissioned the mural covered all the written descriptions on the wall with white paint Friday.