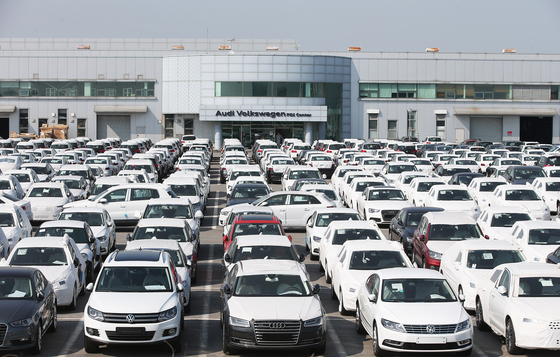 Audi and Volkswage vehicle at a pre-delivery center in Pyeongtaek, Gyeonggi in June 2016, the first time the German automaker was caught for intentionally falsifying its gas emission. [YONHAP]

Audi Volkswagen was fined for false advertising about its cars' emissions for the second time in five years.

Italian automaker Stellantis, manufacturer of the Jeep, Peugeot and Fiat brand, was fined 231 million won for the same thing.

The two automakers are accused of falsely advertising that its vehicles met all Korean environment regulations.

Those claims were posted on the inside of the hoods of vehicles.

In the case of Audi Volkswagen, the company advertised that its AdBlue system, an emissions reduction system for its diesel engine vehicles, satisfied the even stricter Euro 6 environmental standards.

As with the notorious Volkswagen emissions scandal of 2015, the emissions control system operated properly during tests by authorities. But in normal driving conditions, illegal software kicked in and reduced its performance.

The FTC said nitrogen oxide emitted from both Audi Volkswagen and Stellantis models exceeded Korean and Euro 6 environmental standards by as much as 11 times.

Korea was the first country to fine Audi Volkswagen for “diesel gate” emissions scandal that started in 2015. Vehicles intentionally designed to fool the government environmental standard tests were sold between 2008 and 2015.

“We could call this a second 'diesel gate' after the first in 2016,” said Moon Jong-sook, director of the consumer policy department at the FTC.

Moon said the size of the fine on Audi Volkswagen shrank compared to five years before largely because the German automaker’s market share shrank.

“During the first scandal, Audi Volkswagen’s revenue was close to 4 trillion won,” Moon said. “This time, as its market share dropped, revenue was around 340 to 350 billion won.”

Until 2015, Audi Volkswagen was neck-and-neck with other German automakers BMW and Mercedes-Benz, with each holding a market share of about 20 percent for imported vehicles sold in Korea.

Combined, the German automaker has 13.2 percent of the local imported vehicle market.

Mercedes-Benz is currently No. 1 with a 27.5 percent market share. BMW trails with 24.5 percent, according to the Korea Automobile Importers and Distributors Association.

Audi Volkswagen Korea has not commented on the FTC penalty.