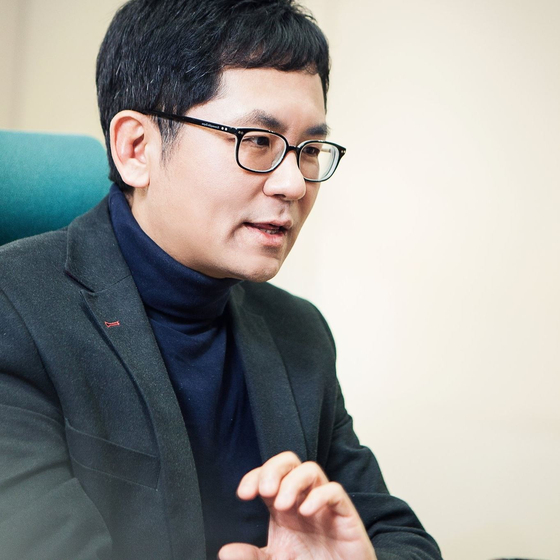 
“I was terrified at how much the world has changed amid the pandemic. [Who would have imagined] the president of the world’s leading superpower claiming that medical experts are spreading fake news, with supporters going wild and attacking Congress?”

Last month, tvN television series “The Devil Judge” aired its final episode with a viewership rating of 8 percent. In an interview with the JoongAng Ilbo, an affiliate of the Korea JoongAng Daily, former judge and screenwriter of the series Moon Yoo-suk explained that the drama was a “thought experiment” on what the world will look like in the future if such chaotic situations persist.

“The Devil Judge,” which aired from July 3 to Aug. 22, is Moon’s first television script since he resigned from the chief judge position at the Seoul Central District Court in February 2020. In 2018, he illustrated the humanity of the courtroom in the screenplay for JTBC’s television series “Miss Hammurabi.” This time, he instead focused on its fierce nature — where harsh rulings and corruption are rampant, set in an imaginary dystopian Korean society.

“Since finishing ‘Miss Hammurabi’ I’ve been meaning to write something with a completely opposite atmosphere,” Moon said. “But the world Park Cha Oh-reum [the main protagonist in ‘Miss Hammurabi’ played by actor Go A-ra] had to face wasn’t that rosy anyway, so I think both dramas are pretty similar, even if the underlying mood is different.”

The courtroom in "The Devil Judge" broadcasts trials and exposes all crimes to the public. [TVN]


“The Devil Judge” depicts a society two years after the end of an epidemic. The main character Kang Yo-han, played by actor Ji Sung, is a chief judge who advocates strong judicial reform and transforms the courtroom into a television reality show. The courtroom broadcasts the entire process of trials, exposing all crimes with the whole nation serving as the jury. A verdict for each trial is decided through a live voting app called “DIKE,” named after the Greek goddess of justice.

Kang is a ruthless character that punishes the corrupted mercilessly and hands down hard sentences, for instance imprisonment for 235 years, corporal punishment of 30 lashes and death via the electric chair. Such sentences were imposed on people including a corporate CEO who is responsible for leaking wastewater into the ocean, a minister’s son who frequently used his power to cover up assault charges and a YouTuber who incited violence toward the socially disadvantaged.

Although Kang establishes a reputation as a “dark hero,” being a man of justice, it is hard to decipher whether his intentions are truly moral. Throughout the story, Kang takes aim at public figures that have committed crimes, including the president of Korea, chairmen of conglomerates and the heads of media companies. In the end, Kang gathers them in the courthouse, and blows up the place with a bomb, as his last judgment.

“[In the show] people cheered for the dark hero as it represented the anger they have toward society,” said Moon. “But can Kang’s final trial really be considered a trial? Turns out it was just a live broadcast of a bomb explosion, and yet the public had agreed to it without due process.”


In one scene, judges Kang, Kim Ga-on (played by boy band GOT7’s Jinyoung) and Oh Jin-joo (played girl group Rainbow’s Kim Jae-kyung) are shown wearing robes and walking toward the camera in a hallway, like priests forming the Trinity. The courtroom also has the appearance of a Greek amphitheater. Even the name “DIKE” derives from religion.

“Dystopia is where authority becomes religion and religion becomes authority as well,” said Moon. “The courtroom is the place that shows the public making a hero of Kang but he takes advantage of their blind faith in him. I used religious overtones in the names to add a tragic sentiment.

“Society becomes dominated by violence, extremism and hate when the public becomes angry and the media and political authority amplify these feelings,” Moon added. “The world of ‘The Devil Judge’ symbolizes a scary place where there is no answer other than Kang.”

The public chooses a verdict through a live voting app called "DIKE," named after the Greek goddess of justice. [TVN]


From what Moon thinks, the public does not wish for the system to become a dark hero, but rather hopes for a society that does not need one. “People who think they are similar to Kang are actually like Heo Joong-se [the on-screen President of Korea who is played by actor Baek Hyun-jin] in real life.”

Heo represents corruption and abuse of power. He was elected president after pledging revolutionary changes for Korean society, but it turns out that he is an ill-mannered character who bluntly degrades and discriminates against foreigners and minorities.

“Humans are vulnerable to temptation, which is why constitutionalism matters,” said Moon. “Toward the end of the series, Judge Kim asked, ‘What do I need to do to make a world without Kang in it?’ That was the ultimate question I wanted to ask.”

In this tragic scene, Detective Yoon Soo-hyun still worries about Judge Kim Ga-on hurting himself, even after being shot. Moon explained this scene was the one he put the most effort into. [TVN]


In the midst of it all, Moon found redemption in “love” itself. The scene Moon put most effort in to was when Yoon Soo-hyun (played by actor Park Gyu-young), Kim’s childhood friend and police detective who tried to expose Kang, is shot but still worries about Kim even when she is dying. Yoon was Kim’s only friend who was there for him throughout his childhood as an orphan.

“It was a scene where I wanted to portray the only person [in Kim’s life] that loved him unconditionally and gave him the will to live,” said Moon. “A certain portion of the entire world is born as sociopaths, but I still think it would be different if everyone has at least one person in their life that truly loves them.”

Why not a Korea-U.S.-Japan TTC?