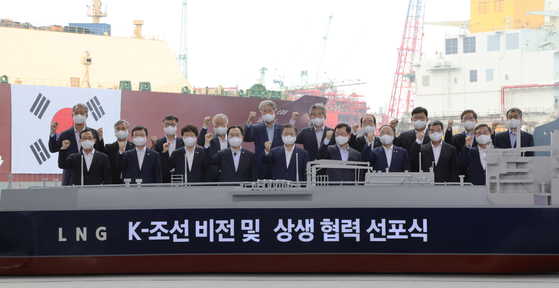 The Korean government is offering support to the shipbuilding industry, including subsidies for payrolls and training.

The goal is to maintain workers in the industry and help with hiring and training.

This includes new hires and rehiring of retired shipbuilding workers.

Shipbuilders will get subsidies to maintain jobs of existing employees.

On Thursday the Ministry of Trade, Industry and Energy laid out its so-called “K-ship” strategy.

Under the plan, the government will offer 1 million won ($856) a month to shipbuilders for every new employee they hire.

The central government will cover 40 percent of that subsidy, with the rest coming from city governments, mainly Ulsan, Busan and Mokpo.

The Industry Ministry will also offer 1 million won subsidies for two months for the training of new employees.

When companies rehire employees that retired, the city government will offer subsidies of between 300,000 and 500,000 won per month per employee for up to eight months.

The government said it plans to be flexible on issuing working visas for foreigners to come to Korea, especially in such fields as coating ships and welding.

Automation technologies including welding robots will be explored to make up for shortages in manpower.

The city government will also cover half of the companies’ insurance payments for employees, including national health insurance and employment insurance, when they maintain jobs for existing employees.

This year, Korea’s shipbuilders have seen a significant recovery in global orders but they find themselves short-handed. Their workforces shrunk over the past few years.

According to Clarkson Research, which specializes in shipbuilding and shipping analytics, orders won by Korean shipbuilders in the first seven months of this year were the most in 13 years.

Korea is close behind China for ship orders.

Last year, the shipbuilding industry was strongly impacted by the decrease in global trade caused by Covid-19.

Over the long-term, the government plans to increase Korea’s ratio of environmentally friendly ship orders from 66 percent this year to 75 percent by 2030.

Additionally, the government it is hoping Korean companies will win 50 percent of global orders for ship driven autonomously by 2030.

The goal is to build a dominant lead in the global shipbuilding market.

The government is offering R&D support for the building of a “smart ship” data platform with local shipbuilders.

“This year we have landed the most ship orders in 13 years, regaining our reputation as the world’s best,” President Moon Jae-in said Thursday during a “K-ship” ceremony held at Samsung Heavy Industry’s shipyard in Geoje, South Gyeongsang.

“Shipbuilding has been one of our main industries, which has contributed much,” Moon said. “But because of the stagnation in the global ship market, our companies, workers and local economies had to struggle. Through our strategies, we will strengthen our shipbuilding industry so that we hold the world’s No.1 spot without contest.”

The “K-ship” event was the latest in a series of “K” campaigns that Moon has been holding this year starting with a visit to Samsung Electronics’ semiconductor plant in Pyeongtaek in May.

Under the label “K-semiconductor,” the government announced various goals for the industry.

That was followed by Moon’s visit to LG Energy Solution’s battery manufacturing plant in Ochang, North Chungcheong in July, where “K-battery” plans were announced. Last month he visited Songdo in Incheon, where the government said it would turn the city into a biopharmaceutical global hub under the slogan “K-bio.”