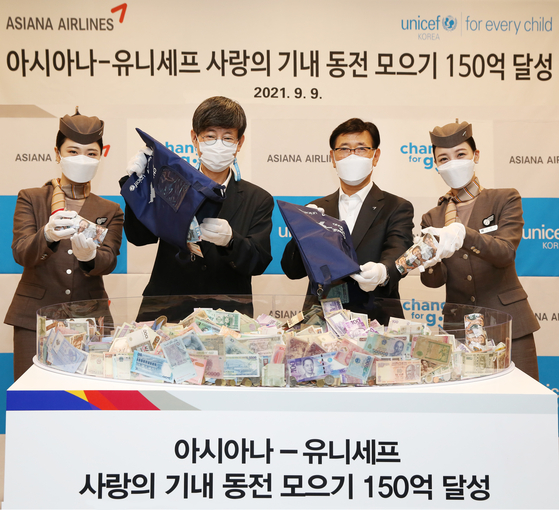 The carrier said on Thursday that foreign coins donated by travelers as part of the Change for Good campaign since 1994 reached 15 billion won after 27 years.

Asiana Airlines donates to Unicef Korea, which then delivers the funds to the Unicef headquarters in New York.

“Having reached 15 billion won in donations during the Covid-19 era, when the number of flights being operated has largely decreased, makes the achievement even more meaningful,” said Asiana Airlines CEO Jung Sung-kwon in a statement.

The donations have been put toward the prevention of malaria and the establishment of schools in Africa and Asia. Funds were used to supply masks and medical gloves worldwide since the outbreak of Covid-19.

On the same day, Korean Air Lines, which is in the process of merging with Asiana Airlines, announced it received a green light from Malaysian Aviation Commission for the merge.