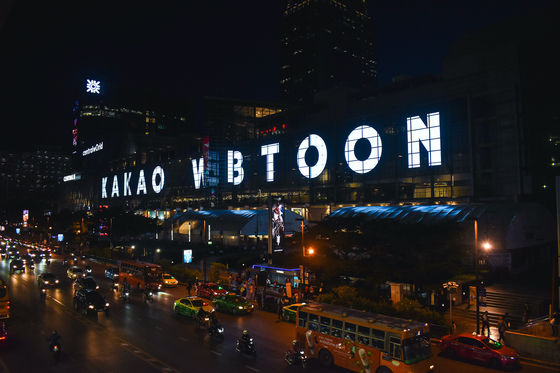 Kakao Webtoon was the No. 1 grossing webtoon app between Aug. 1 and 31 on both Google’s Play Store and Apple iOS’s App Store in Thailand. It was also the most-downloaded app in the category between that same period.

Kakao Webtoon’s revenue on the Apple App Store increased on month by 35 percent in August, the fastest growth displayed by any webtoon app in the Thailand market. It ranked third on the list of all entertainment apps in terms of revenue growth.

The app was released in Thailand on June 7. It recorded 370 million won ($316,000) in revenue within four days of the app’s release and shot up to the top of the daily download rankings in the country.

Kakao Entertainment credited the growth to the increasing development in the country’s 3G and 4G data infrastructure in Thailand.

“Thailand is dubbed the hub of the content market in Southeast Asia,” Kakao Entertainment said. “There are over 42 million people using the 3G and 4G networks, and the potential of its online market has been bridging the Southeast Asian region and Korean culture.”

Coming in at second on Thailand's app market was Naver’s Webtoon app.

Naver and Kakao have been facing off both in and outside of Korea with its webtoon businesses, with Kakao overthrowing Naver in some Asian markets. Naver’s Line Manga has been dominating the Japanese web comics market since its release in 2013, but was overthrown by Kakao Japan’s Piccoma for the first time last year.

According to app-analyzing company App Annie, Piccoma surpassed $120 million in revenue in the second quarter of this year, while Line Manga recorded $50 million.

However, Naver is still the No. 1 webtoon app in 100 countries around the world, including Korea, in terms of both revenue and user volume, according to Naver.