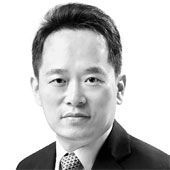 
The ruling Democratic Party (DP) argued that polls show more approval of punishing purveyors fake news than disapproval, as the party defended its push for a draconian revision to the Media Arbitration Act. Who would oppose punishment if they are asked about fake news? But the hardliners of the DP have deceived the people while pushing the revision. The bulk, or 99 percent, of fake news is generated from for-profit YouTube channels. But the revised bill does not apply to them. After that was revealed, the approval rate for the bill plunged to 30 percent.

All leaders wish to tame — or avoid — the press. While campaigning as Republican presidential candidate, George W. Bush made an offhand remark about a reporter without knowing that the microphone was on. The press can be irksome in democratic states. If not for the press, the powerful and wealthy would have nothing to fear. It is why the First Amendment to the U.S. Constitution guarantees the freedom of the press so that it can monitor the governing powers.

If democracy is weak, the temptation to control the media grows. The military regime in the 1980s pushed ahead with mergers of media outlets. Then President Chun Doo Hwan ordered Huh Moon-do — his secretary for state affairs who used to be a reporter for the Chosun Ilbo — to draw up an outline on so-called media promotion. The security command of the military summoned the owners of news organizations and forced them to sign an agreement on mergers. As a result, journalists were laid off en masse. The mass restructuring had a cause then too. In a hearing later, Huh defended the move. During prosecutorial questioning in 1996, he again justified the action saying the sweeping M&As were necessary to clean up junk media outlets and pseudo journalists. 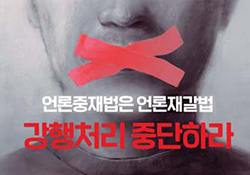 A poster made by seven local media organizations, including the Korean Association of Newspapers, to oppose a draconian revision to the Media Arbitration Act being pushed by the ruling Democratic Party.

It was typical press repression by an authoritarian military regime. But the revised media bill can be equally intimidating and oppressive. The new bill’s draconian provisions can depress journalists’ instinct to investigate and stifle press freedom in the country. The journalism environment in Korea is not as glamorous as it appears. If you read the morning papers, their writers and publishers appear to know everything about the world. But the information on policy flops by the government, excesses by the powerful and corporate exploitation of consumers does not walk into the newsrooms on its own.

Reporters must find the truth from nothing more than a tip. If they start poking around, insiders hide whatever they can. Journalists do not have any investigative authority to look into financial accounts or even find out where core suspects live, let alone land an interview with them. From the torture of student activist Park Jong-chul in the late 1980s, most of the high-profile cases exposed by the press were a result of the incessant pursuit of journalists.

The revised Media Arbitration Act is based on the presumption that a reporter has mischievous intentions from the beginning. The bill also seeks to ban access to internet articles on the grounds of privacy protection. When found to be harmful, an individual can claim five times the damage. When the bill goes into effect, risktaking in the pursue of truth and efforts to reveal corruption will be seriously dampened. If self-censorship kicks in, journalists’ investigations will only weaken.

Even with whistleblowers, a press organization may not be able to cover the story. If there is no clear evidence, investigative reporting can become difficult. Reporting based on circumstantial evidence will be highly risky. The bill can be as oppressive as the forced mergers were under the military regime. It is why the United Nations and foreign press organizations have sent warnings to the Korean legislature.

The DP shamed the country as it stumbled to answer foreign media questions about whether the bill also applies to them and why the bill does not include single-person media. Infatuated with its super-majority power, the DP has become arrogant to think that it can stop any critical comments toward the ruling front as long as it controls the media.

If the DP had not regarded the press as subject to the governing power, it could not have come up with such a dangerous idea. If the party does not want to follow in the footsteps of Huh and Chun, it must scrap the bill immediately —instead of trying to force it through with a few cosmetic fixes.