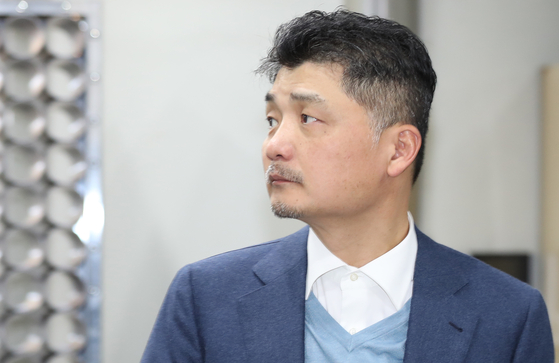 Kakao founder and chairman Kim Beom-su in Seoul in March 2019. Kim is again reportedly accused of omitting information of a de facto holdings company which he entirely owns and control Kakao from. [YONHAP]

Kakao founder Kim Beom-su is in trouble with the antitrust agency for omitting key information about the de facto holding company K Cube Holdings in regulatory filings, according to local media reports Monday.

The government and ruling Democratic Party have been closely scrutinizing IT behemoths, particularly Kakao, which has been aggressively expanding its business portfolio with little oversight.

Kakao is accused of omitting information on or falsifying disclosures about K Cube Holdings in the last five years, including information on Kim’s relatives' roles in the de facto holding company, as well as business relations between Kakao and its affiliates.

The FTC said it could not confirm any investigation.

K Cube Holdings, which was founded in 2007, is 100 percent owned by Kim, Kakao’s founder and chairman.

There’s not much public information about the unlisted company. According to a regulatory filing made to the Financial Supervisory Service, the company specializes in management consulting, real estate leasing and investments.

However, the company is also used in controlling the Kakao empire.

As of last May, according to the FTC, K Cube Holdings owned a 10.6 percent stake in Kakao. Kim owns 13.3 percent of Kakao.

When combing the two, Kim controls a 23.9 percent stake, the largest among investors.

The first CEO of the de facto holding company was Kim’s brother-in-law. In 2013, Kim’s own brother Kim Hwa-young became CEO and he ran the company until December 2020.

Kim’s wife is registered as an executive and all two of Kim’s adult children are employees of K Cube Holdings.

Earlier this year, the Kakao chairman gave 330,000 Kakao shares, which the time were valued at 145.2 billion won, to relatives.

His wife and two children each received 60,000 shares.

K Cube Holdings is suspected of being used as a piggy bank by Kim’s family.

It reports operating losses, possibly because of the high salaries paid to Kim's relatives.

This is not the first time that Kakao has been investigated for witholding information on its affiliates. It was caught by the FTC in 2016 for omissions in regulatory filings about share ownerships among its affiliates.

Recently pressure on IT behemoths has been intensifying. Compared to traditional conglomerates like Samsung, they were lightly regulated.

During a European Chamber of Commerce in Korea (ECCK) event last Friday, FTC Chairwoman Joh Sung-wook said online platforms like Naver and Kakao have made contributions such as increasing convenience in people’s daily lives and widening choices for consumers.

But there are growing cases in which consumers are being negatively affected by them, she added.

Joh stressed the importance of two bills the FTC is pushing, including one in which online platforms could face fines of up to 1 billion won for unfair business practices.

Other government agency have also been cracking down on IT companies.

Democratic Party Chairman Song Young-gil recently criticized Kakao after its mobility arm was found to have attempted to raise commission charges on taxi drivers, and also charges on shared bikes.

Kakao’s chairman in March made headlines after he and his wife signed the Giving Pledge to give away half their fortune.

He was the second tycoon in Korea to take the pledge after Kim Bong-jin, founder and CEO of Woowa Brothers, which owns the delivery app service Baedal Minjok.

A win for donation culture