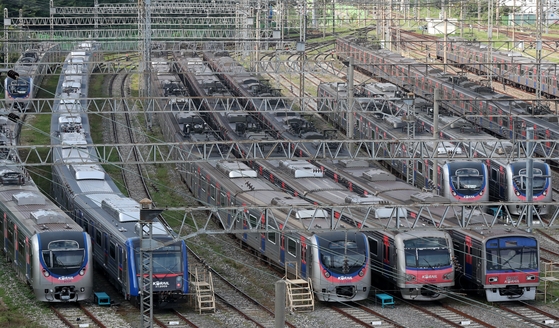 
Seoul's subway workers threatened to go on strike Tuesday morning if Seoul Metro does not ditch a restructuring plan to deal with its massive financial problems.

A total of 1,539 subway workers on lines one through eight will go on strike Tuesday morning if final negotiations Monday evening between the company and union fail, according to the Seoul Transit Corporation Labor Union.

"As this is the last round of negotiations, we will try our best to continue discussions in the evening, but I do think that it will be hard to achieve an agreement as both sides are unwilling to compromise on major issues such as employee layoffs," said a spokesperson for the union after an hour and a half meeting with Seoul Metro. "In that case, we will go on strike."

The meeting, which started at 3 p.m. Monday, lasted longer than expected. The participants decided to take a break and resumed discussions in the evening.

Since early August, Seoul Metro's unionized workers have threatened to stage a walkout if Seoul Metro and the government continue to push a restructuring plan that will cut 10 percent of the subway's workforce and freeze employee wages.

The restructuring plan is needed with Seoul Metro expected to lose 1.6 trillion-won in 2021, its highest losses ever.

"We cannot accept a restructuring plan that unfairly sacrifices the workers for a financial situation that has been generated due to government neglect and further aggravated by Covid-19," said the union.

According to the union, one of the main causes of the losses are subway fare policies promoted by the city government, such as excessive discounts for the elderly, the disabled and Korean war veterans.

The loss from such discounts amounted to 264.3 billion won or 23.7 percent of last year's first quarter deficit, according to the Seoul Transit Corporation Labor Union.

Seoul Metro froze fares since 2015 under government orders as well.

"If the Seoul Metropolitan Government wants these policies, it needs to provide other ways to offset the resulting financial losses," said the union.

Covid-19 also aggravated Seoul Metro's financial situation as the number of passengers nosedived by as much as 40 percent, compared to before the pandemic.

Since 2020, subways have lowered their operation rates by 20 to 30 percent at night in accordance with the government's social distancing guidelines. That results in lower revenues.

The union demands that the central government and Seoul Metropolitan government come up with "measures to normalize Seoul Metro's current financial state, such as enacting legislation to cover public service expenses such as fare discounts and providing emergency funds to cover losses from Covid-19."


The union strongly oppose employee layoffs, saying that it is both unfair and unsafe.

According to the union, cutting staff in subway stations is a "risky policy that can lead to an increase in civilian and industrial accidents."

Seoul Metro maintains that the restructuring plan is necessary to overcome its losses and a 700-billion-won debt as well.

If negotiations fail and the strike occurs, subways on Tuesday will operate normally during rush hour. During off-peak hours, subways will run around 70 to 80 percent of their normal operation rate, according to Seoul Metropolitan Government.

But, if the strike continues over eight days, operation rates may be reduced to as low as 65.7 percent during off-peak times.