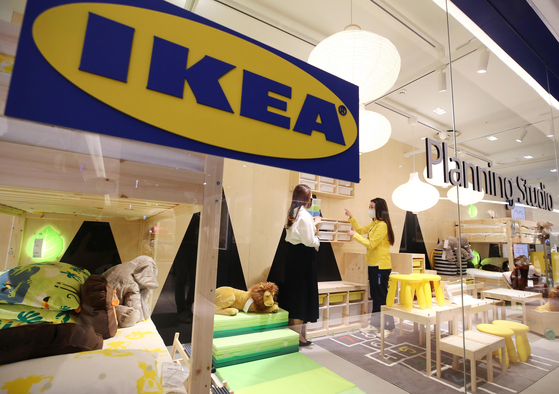 A view of an Ikea store within Hyundai Department Store in Gangdong, Seoul. [NEWS1]


Ikea Korea's growth has seen a sharp drop in the past year, and the company is aiming to win back customers with cheaper deliveries and maybe even lower fees to assemble wardrobes and bookshelves.

The furniture company’s revenues in Korea for fiscal 2021, between last September and this August, rose 3.4 percent on year to 684.6 billion won ($584.6 million). The on year growth is the lowest since the company entered the Korean market in 2014.

Other businesses selling furniture and household effects flourished during the Covid-19 pandemic as people were forced to stay home and became more interested in decorating their houses. Ikea Korea was no exception in fiscal 2020, when revenues rose 32.6 percent on year to 663.4 billion won. That was the biggest on year growth for the company. 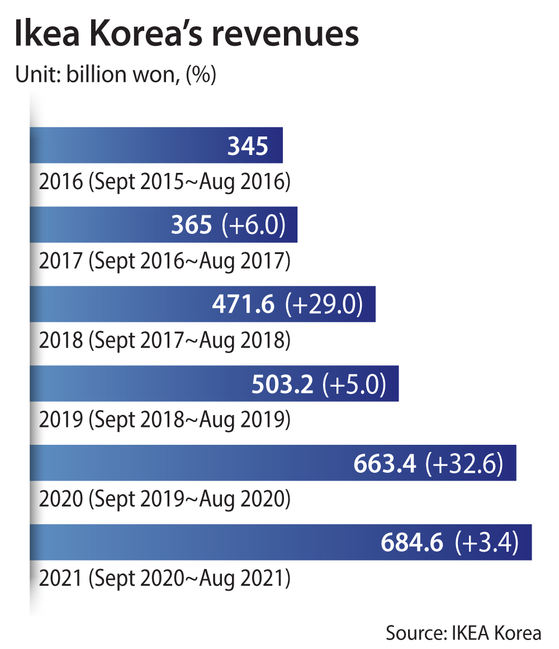 But Ikea’s pricey deliveries became an issue for many customers as they turned to online shopping.

The company charged 5,000 won for all online deliveries for products that can fit into a 1 meter wide delivery box. But anything bigger was charged 59,000 won.

“Ikea’s strong suit is price and design rather than quality, but the total price significantly rises when people buy products online [and have to have them delivered]," said a spokesperson for a local furniture company.

Having furniture showrooms that inspire home décor ideas for visitors was once considered an Ikea strength, but other companies have begun to do the same. Hanssem is expanding the number of Hanssem Rehaus and Design Park stores and Hyundai Livart is building more Livart Style Shops, which are stores that also display small showrooms similar to Ikea’s.

Their rise removed customers’ incentive to visit Ikea stores, which are usually in relatively remote locations.

The popularity of virtual showrooms is also rising, replacing the need to go to an actual furniture shop. Applications such as Today House allows users to tour interiors of houses uploaded by other users and directly purchase products that appear in the photos.

A view of an Ikea store within Hyundai Department Store in Gangdong, Seoul. [NEWS1]


Ikea Korea noticed the slump and has been adjusting its policies. It lowered delivery prices for online orders in August.

Compared to the previous flat rate of 5,000 won for relatively small shipments, the company implemented different prices rates based on volume and size of products. Small products such as squeegees or bath sponges are now delivered for the lowest price of 3,000 won.

Bigger products such as mattresses and curtain rods can now be delivered for as low as 8,000 won.

Ikea Korea also plans to expand deliveries for purchases made in its stores. Ikea Korea's Neighborhood Delivery Service promises to deliver furniture bought in a store to the customers' houses on the same day if a delivery request is made before 2 p.m. But the service is only offered to locations close to the Ikea stores. Ikea's store in Goyang, Gyeonggi only offers the delivery service to locations in Goyang and Gangseo, Seodaemun, Eunpyeong and Mapo Districts in Seoul. The company plans to offer it in more areas.


“We plan to offer various services so our customers can have enjoyable shopping experiences not only at offline stores, but also online,” said a spokesperson for Ikea Korea. “We also plan to offer our assembly service for a more reasonable cost.”

Local furniture companies are expanding through partnerships and acquisitions. Lotte Shopping was selected as a strategic investor in IMM Private Equity’s acquisition of Hanssem. Brands such as Hyundai Livart and Shinsegae’s Casamia have been able to successfully sell online by using online shopping channels of their parent company’s affiliates.

“Ikea is facing a turning point after successfully tapping into the Korean market,” said an executive of a local furniture company. “Ikea Korea’s future performance will be determined by how well it corresponds to the online furniture market.”