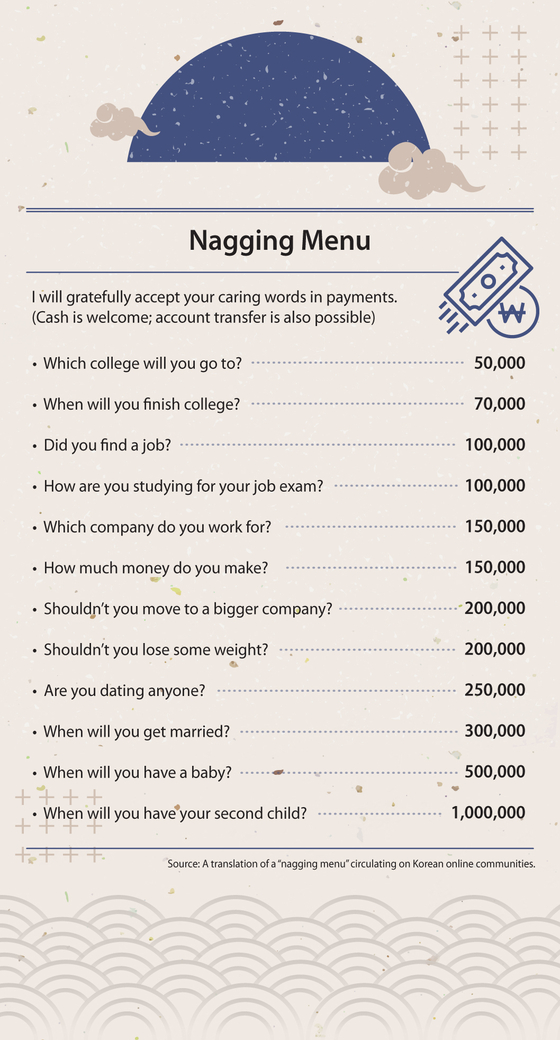 “Nagging menus” for traditional holidays have been circulating on Korean online communities over the past few years. [BYUN JU-YEON]


From Sept. 20 to 22, Koreans will celebrate their second Chuseok harvest holidays amid the Covid-19 pandemic. This Chuseok coincides with the highest Level 4 social distancing due to a prolonged wave in surges of cases, but even the measures specially eased for the major national holiday only allow a maximum of eight people to gather at home. Bustling family reunions for Chuseok seem unlikely to happen for a second year.

But many — especially the younger generations — seem to welcome Covid-caused cancellations of their family reunions.

“My graduate students jumped for joy and said that the eight-person limit was ‘good news,’” said Lim Myung-ho, a professor of psychology and psychotherapy at Dankook University. “They told me they were relieved that they don’t have to attend family reunions and see their relatives.”


Their responses are not indicative of a deep hatred that Koreans have for their extended families. Rather, according to a 2019 survey by job search website Saramin on Seollal (Lunar New Year), another major traditional holiday, 56.4 percent of unmarried respondents said the top reason they felt stressed about the holiday was “older relatives nagging.” The runner-up was “relatives asking probing questions.”

For many Koreans, family reunions on traditional holidays seem to be synonymous with nagging, or jansori in Korean, from older relatives.

“Korea’s social hierarchy is based on age, and that leads older people to think they are entitled to patronize younger people and meddle in their personal lives,” said psychology professor Kwak Geum-joo of Seoul National University. “Those who nag think they’re being caring, but in reality they’re just stressing out young people who are on the receiving end.”

Families being dysfunctional and arguing over the Thanksgiving or Christmas dinner table is a common trope in Western cultures as well. Older family members speaking condescendingly to younger ones is also not a phenomenon unique to Korea. However, Lim says Korean-style nagging has a different context behind it.

“Nagging in Korea is based on a concept shared by Korean society that life is linear, with certain milestones that should be reached by a certain age,” he said. “The steps of a normal, ideal life are entering a good university, followed by finding a job, marriage, childbirth, then getting your children into good universities, in that order. It’s like a loop that goes on generation after generation. Each person is nagged based on what milestone they are expected to reach next.”


“I thought university was the obvious step after high school, without a doubt,” said a college student surnamed Hong. “Now that I’m close to graduating, the next step is getting a job, so I’m currently studying for the civil service exam. These expectations feel so natural to me.

“After I get employed, my family might start asking me ‘Are you saving up for marriage? When will you get married? When will you have a baby, then your second child? Which kindergarten will you send your children to?’ My uncle was really nagged at to get married, until he finally did and had a daughter. Now the family asks about her education. It’s like a new cycle has started, and I’ve also internalized this cycle, thinking 'I should have a job by 27 at latest.'"

In fact, the expected life cycle in Korean society seems so standardized that “nagging menus” have been circulating on Korean online communities over the past few years. The humorous images list common nagging phrases for various life stages alongside a price for asking each unwarranted comment. For instance, less personal questions like “Which college will you go to?” cost 50,000 won ($40), but more probing ones like “When will you have your second child?’ has a heftier price of 1 million won.

“The fact that an entire country can relate to ‘nagging menus’ means that the topics of nagging are extremely standardized,” Lim said. “It basically means that families nationwide nag about the same things, because society shares one universal and linear expectation of life milestones.”

Marriage is a key topic of nagging, as most of the older generation considers it a must. A woman in her mid-20s with the last name Jun shared her personal experience.

“When I was dating my ex-boyfriend in college, every holiday my grandmother and female cousins would all nag at me to break up with him because he attended a university less prestigious than mine,” she said. “Even after I’d broken up with him, they keep pressuring me to get married, emphasizing that finding a good husband is what's most important for a woman.” 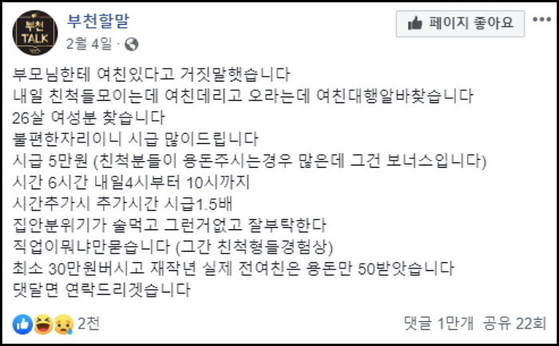 An online post by a man recruiting a woman to act as his girlfriend at his family reunion, offering an hourly wage of 50,000 won, went viral in 2019. [SCREEN CAPTURE]


Some youths are so sick of their parents and older relatives pestering about marriage that they hire someone to pretend to be their girlfriend or boyfriend during the holidays. In 2019, an online post by a man recruiting a woman to act as his girlfriend at his family reunion, offering an hourly wage of 50,000 won, went viral.

A Seoul-based errand service business anonymously told the Korea JoongAng Daily that a good number of clients actually paid for such services.

“We’ve been operating since 2011,” said an employee of the business. “During holiday seasons, we get more requests like that than you think. When a client asks to hire a fake girlfriend or boyfriend, it’s usually because their families severely nag them. We find the right person for the job, train them about how to act and also make the client and ‘actor’ discuss personal details so they can be convincing. We charge 230,000 won on average for the whole service."

While many youths view nagging from their family as a great source of stress, Hong said she thinks of it as her relatives attempting to make small talk and tries to not take it personally.

“Koreans do have a standardized idea of a normal life,” she said. “But to be fair, extended families gather only once or twice a year at most. Frankly, it’s quite awkward when we see each other. I think my older relatives ask those generic yet probing questions because they don’t know what else to say, or are genuinely curious about what I’m up to since we haven’t seen each other in years. I’m personally not too offended by such questions, but I understand that people who are already struggling with something may feel more self-conscious and ‘nagged at’ when they’re asked.”

Professor Lim says that the older generation should realize that seemingly benign questions can in fact be rude and hurtful.

“Even if you don’t know what to say to a relative you haven’t seen in ages, it’s impolite to ask about personal matters,” he said. “Also, what you think are well-wishing words is often just unsolicited patronizing. If you must break the ice, stick to talking about the weather.” 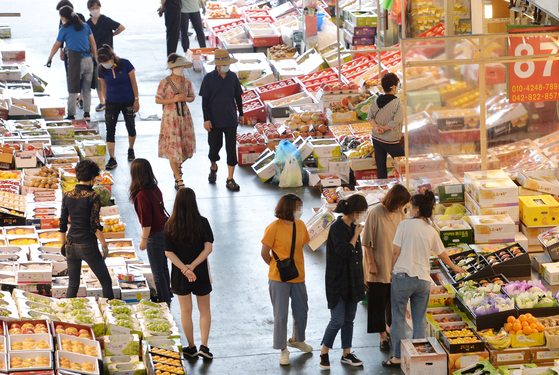 Koreans shop for fresh produce in preparation for the Chuseok harvest holidays on Sept. 14 in Daejeon. [KIM SUNG-TAE]


Lim added that the older generation must also keep in mind that the socioeconomic situation has changed.

“Back in the day, owning a house and being married by 30 was not too difficult, so they were normal expectations,” he said. “But now the economy has become much worse, and we’re in a global pandemic on top of that. Youths today have a much harder time finding jobs and face much higher housing prices, and marriage has also become more difficult as a result. Applying the same standards from your times and nagging youths to reach those milestones can deeply hurt them when they’re already stressed about it.”

“The younger generation’s view on life milestones has also changed,” said Professor Kwak. “Now they’re asking why they need to get married and have kids in the first place. Although that clashes with the older generation’s conventional values, pestering youths to get married is pointless and will only incite resistance."

Lim suggested that self-reflection and education are key for the older generation.

“If nagging makes younger people happy to avoid family reunions, it takes away from the meaning of family and traditional holidays,” he said. “The older generation should look back on themselves, and they need education on respecting personal boundaries and different values. We must understand that not everyone lives life at the same pace, nor should they. If that’s not easy, it will be helpful to use the nagging menu as reference and memorize what not to say.”