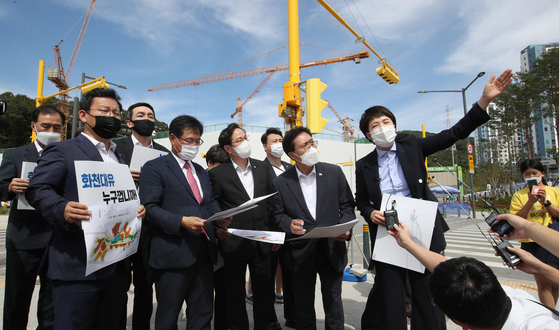 Lawmakers of the main opposition People Power Party who are members of the party's task force looking into allegations against Gyeonggi Gov. Lee Jae-myung and a development project in Daejong-dong, conduct an on-site inspection of the complex in Seongnam, Gyeonggi, Thursday. [JOINT PRESS CORPS]


The main opposition People Power Party (PPP) launched Thursday a task force to probe allegations that Gyeonggi Gov. Lee Jae-myung gave preferential treatment to a small asset management company that pocketed tens of billions of won in dividends in a development project in Daejang-dong in Gyeonggi during his time as Seongnam mayor.

Lee, a frontrunner ruling Democratic Party (DP) presidential candidate, has shot back at the allegations, and his campaign called them “groundless” Thursday.

Hwacheon Daeyu, a fledging asset management company which joined the 1.15-trillion-won ($981 million) project to develop a space of 968,890 square meters (239 acres) in Daejang-dong in Seongnam, allegedly received a dividend of 57.7 billion won in the past three years since 2019 with an investment of 49.95 million won.

Lee, while he was Seongnam mayor in 2015, pushed the Daejang-dong development project, a plan to accommodate 5,903 households.

Seongnam Development Corporation held 50 percent of the stakes in the development project, and a civilian consortium including Hana Bank had the other half. Hwacheon Daeyu only had a 1 percent stake in the consortium but allegedly raked in a disproportionate amount of profit compared to the other stakeholders, leading to suspicions on whether it had received any preferential treatment from Lee.

The company’s owner, surnamed Kim, is a retired journalist who interviewed Lee in 2014. Kim has claimed he has no special relationship with Lee.

Kim told media Tuesday that he owned a 100 percent stake in the company but did not get involved in management and claimed that the company actually saw losses in the joint public-private project.

Kim Gi-hyeon, the PPP floor leader, at the inaugural meeting of the task force looking into the allegations against the Gyeonggi governor and the Daejong-dong development project Thursday said that it was necessary to investigate the connection between Lee and Hwacheon Daeyu.

He continued, “I want to ask Gov. Lee directly, who does Hwacheon Daeyu belong to?”

Floor leader Kim said that Hwacheon Daeyu received a disproportionately large amount of dividends compared to its investment, noting that the public will find this hard to believe.

Another stakeholder, SK Securities, which held a 6 percent stake, also received dividends worth 346 billion won, he noted, and allegedly had links with the Hwacheon Daeyu owner.

In contrast, Seongnam Development Corporation, which holds a 50 percent stake, reportedly received 183 billion won in dividends over the past three years.

Kim said that a special probe or a state audit next month should dig into the allegations raised against Lee and related individuals. Lawmakers of the PPP later in the day conducted an on-site inspection of the Daejang-dong complex.

Kim pointed out that the development of Daejang-dong was “a low-risk project that had no choice but to be 100 percent successful once started.”

He added that the Daejong-dong development project “will be remembered as Gov. Lee’s biggest embarrassment, rather than his biggest achievement.”

In a press conference on Tuesday, Gov. Lee described the Daejang-dong development as his “biggest achievement” as Seongnam mayor, calling it “a model public project that returned 550.3 billion won in revenue from the project to the local people.”

He strongly denied the allegation of favoritism and accused PPP lawmakers and conservative media of spreading negative and false information.

Lee told lawmakers at the Gyeonggido Assembly Wednesday, “I agree 100 percent to an investigation into the Daejang-dong development project,” shooting down the allegations.

His campaign said the prosecution, police and opposition parties have raised various allegations against Lee over the past decade, but maintained there has been no favoritism or misconduct on his part.

Attorney Song Pyeong-soo, a spokesman for Lee’s camp, told CBS radio the same day, “Since real estate prices have more than doubled, [private businesses] have been lucky and have made a lot of profit,” adding, “the allegations are groundless.”

The PPP has also raised suspicions against Park Young-soo, a special prosecutor who investigated former president Park Geun-hye before she was impeached, as he was reported to have served as an executive adviser to Hwacheon Daeyu, and his daughter had been employed at the company.

Prosecutor Park said Tuesday that he had been asked to give legal advice to the company and stepped down from the position before joining the special probe against former President Park and that his daughter got the job legitimately through her skills.