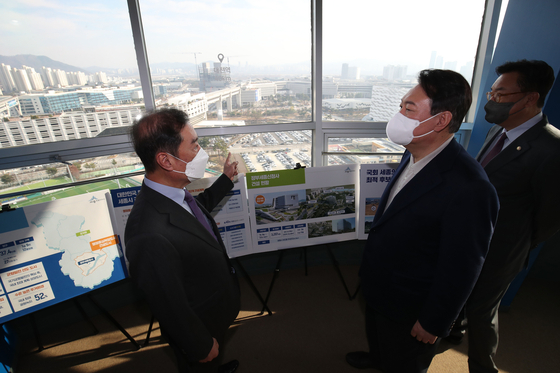 Yoon Seok-youl, presidential candidate of the main opposition People Power Party (PPP), right, speaks to his election campaign chief Kim Byong-joon in a visit to Milmaru Observatory in Sejong on Monday afternoon, as he kicks off a three-day visit to the Chungcheong region with 100 days left until the election next March. [JOINT PRESS CORPS]


With just 100 days until the March 9 presidential election Monday, Yoon Seok-youl, presidential candidate of the main opposition People Power Party (PPP), was in the lead against the ruling Democratic Party (DP) nominee Lee Jae-myung, according to the latest polls.

Yoon led by 9.4 percentage points, receiving 46.3 percent in support in a hypothetical multicandidate race in a Realmeter survey released Monday, while Lee received 36.9 percent. The survey was conducted on 3,023 adults 18 and older nationwide from Nov. 22 to last Friday.

They were trailed distantly by Ahn Cheol-soo of the minor opposition People's Party, who came in third with 3.7 percent, and Sim Sang-jeung of the progressive Justice Party who received 3.3 percent.

There was a margin of error of plus or minus 1.8 percentage points and a 95 percent confidence level.

In terms of support for the political parties, the PPP received 39.3 percent in favor, and the DP received 33.2 percent.

There was less difference between the two candidates in another poll, with Yoon holding an advantage of 2.8 percentage points over Lee in a survey released by the Korea Society Opinion Institute (KSOI) Monday. The KSOI conducted the survey on 1,009 adults over Friday and Saturday, and in this poll, Yoon received 41.8 percent compared to Lee's 39 percent.

Yoon and Lee were neck and neck in another poll conducted by Embrain Public and commissioned by the JoongAng Ilbo released Sunday. Yoon had a 2.8 percentage-point advantage in a potential multicandidate race, receiving 38.9 percent support compared to 36.1 percent for Lee.

The survey was conducted on 1,020 adults on Friday and Saturday. Ahn received 6.1 percent, and Sim followed with 5.6 percent.

Lee was more popular in the Jeolla region, traditionally a liberal stronghold, according to this survey, and also held an edge in Gangwon and Jeju. Yoon led in most other regions including Seoul. Females surveyed favored Yoon, with 40.8 percent supporting the former prosecutor general compared to 32.9 percent for Lee. Lee was slightly more popular with males, with 39.2 percent compared to Yoon’s 37 percent.

The public opinion at the 100-day mark usually is a critical indicator, which in past elections generally predicted the results of the presidential race. But there are also chances that the results will flip-flop, especially with the unpredictably of the current race, which does not show a clear-cut lead in polls and also includes uncertainty over the prosecution probes related to both leading presidential candidates.

Both presidential hopefuls are new to the traditional political scene, though Lee is a former Gyeonggi governor, and neither of them have legislative experience like all recent past candidates. They also have the daunting task of wooing young voters in their 20s and 30s who can be critical swing voters in next year’s race.

In the last seven presidential elections, there were six cases in which the candidate who had led in polls conducted around the 100-day mark was elected. The only exception was during the 16th presidential election in 2002, when liberal candidate Roh Moo-hyun of the Grand Millennium Party defeated Lee Hoi-chang of the conservative Grand National Party after a merger with politician and businessman Chung Mong-joon. Chung dropped out of the race and endorsed Roh, though he eventually withdrew his support last minute. 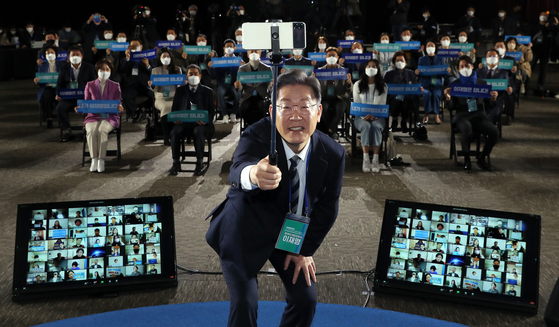 Ruling Democratic Party presidential candidate Lee Jae-myung poses for a selfie with the crowd Monday after holding a town hall with 200 people participating virtually and in-person at the Kim Dae-jung Convention Center in Gwangju, to mark 100 days till the election. [NEWS1]


To mark 100 days till the election, DP candidate Lee held a town hall with 200 people participating both virtually and in-person at the Kim Dae-jung Convention Center in Gwangju.

Lee pledged that he will become a “president for the economy and people’s livelihood.” He said he would put all of his effort into developing the country’s economy and focus on reforming politics and his party. He was on a four-day visit to the Honam region, or the North and South Jeolla provinces, which includes meeting with younger people at universities, small business owners and survivors of the May 18 Gwangju Democratization Movement of 1980.

Yoon headed to Chungcheong, considered a tiebreaker region, Monday for a three-day trip as his first official campaign trip. This comes as his election campaign committee — minus kingmaker Kim Chong-in, a former PPP interim chief — takes form, and Yoon convened its first meeting earlier that morning at the National Assembly in Seoul.

He described himself as a “son of Chuncheong,” calling himself practically a native of the province, though he was born in Seoul, in the election campaign committee meeting earlier that morning. His father is a native of Gongju, South Chungcheong.

While visiting Sejong City on Monday, Yoon said that, if elected, he will establish a “second Blue House office in Sejong.” He was accompanied by his campaign chief Kim Byong-joon.

Yoon also launched a youth committee Sunday, aiming to better woo the 20-to-30 demographic, and is scheduled to hold a talk concert in Daejeon Monday.

Yoon said Sunday that PPP head Lee Jun-seok was supposed to accompany him on the Sejong trip, along with Kim, but Lee said in a CBS radio interview Monday morning that he wished Yoon had consulted him about his schedule before making an announcement to the media first. Lee said his schedule had already been filled beforehand.