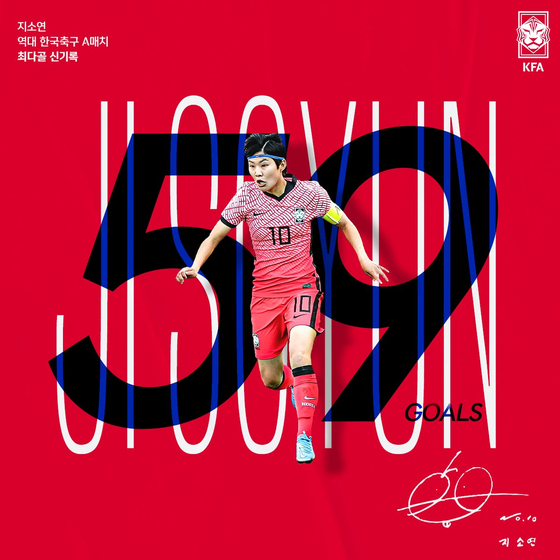 An image tweeted by the KFA celebrates Ji So-yun's 59th goal, which made her the highest scoring Korean footballer of all time. [SCREEN CAPTURE]


The Korean women's football team will continue on the road to the 2022 AFC Women's Asian Cup and the 2023 FIFA Women's World Cup with a qualifier against Uzbekistan at Pakhtakor Markaziy Stadium in Tashkent, Uzbekistan on Thursday.


Korea was drawn in Group E for the Asian Cup qualifiers, alongside world No. 43 Uzbekistan and world No. 125 Mongolia. The top team from each group advances to the Asian Cup, which in turn acts as a qualifier for the 2023 World Cup.

For Korea, ranked at world No. 18, Group E ought to present little challenge. The Taeguk Ladies are already off to a fast start, beating Mongolia 12-0 on Sept. 17.

During that game, Chelsea star Ji So-yun earned her spot in the history books as she overtook Cha Bum-kun to become the highest-scoring national team player of all time.

Ji was one of seven goal scorers, netting her 59th goal for Korea to overtake Korean footballing legend Cha, known as Tscha Bum, as Korea’s all-time leading goal scorer across all teams, all divisions, all genders and all competitions.

Ji’s coronation as the queen of Korean football didn’t come until the 35th minute, by which point Korea were already up 4-0.

Choo Hyo-joo opened the scoring in the fourth minute, with Tottenham’s Cho So-hyun adding a second in the 24th minute, Brighton’s Lee Geum-min scoring in the 30th and Lee Min-a adding one more in the 32nd.

Choo and Lee Geum-min each scored one more in the first half to take Korea into the break up 7-0.

The onslaught didn’t stop after the break, with Cho picking up one more and Moon Mi-ra netting a hat-trick in just 22 minutes. A single from Park Ye-eun completed the rout and put the score at 12-0.

Korea scored their first goal at four minutes and their last at 89 minutes, spreading the onslaught evenly across almost the full 90 minutes.

But Korea still have to pick up a win against Uzbekistan, especially because, in an unusual twist of fate, the central Asian side also beat Mongolia 12-0 when the two countries faced off on Monday.

With Korea and Uzbekistan both on three points with 12 goals for and no goals against, only a win in Tashkent on Thursday will secure a ticket to the Asian Cup.

Korea has competed at every AFC Women's Asian Cup since the team was formed in 1990. Since 1995, the first time the Taeguk Ladies made it out of the group stage, the team has ended every tournament up on goal difference, although it has never made it to the final.

In their most recent tournament, the 2019 EAFF E-1 Football Championship, the Taeguk Ladies finished second with Japan taking first place. Despite that success, the team failed to qualify for the 2020 Tokyo Olympics earlier this year.

Korea and Uzbekistan will face each other at 4 p.m. on Thursday, or 8 p.m. in Korea.