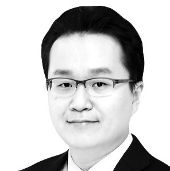 The author is a professor of Seoul National University School of Law.


The rise of fintech has been the biggest change in the financial industry in recent years. Financial services have become simpler and easier through the application of digital technology. We can send mobile cash gifts to congratulate couples on their weddings instead of having to make a trip to the ceremony. We can compare various financial products of different institutions without having to make a visit to an office. Such ease could not have been imagined just a few years ago.

The rise of fintech also gave birth to financial start-ups like Toss in Korea. The company is launching a legitimate online bank based on its years of knowhow and customer base since it started its pioneering peer-to-peer money transfer platform. Platform giants such as Naver and Kakao also provide financial services based on their big data and enormous user bases.

Traditional banks and other financial players are vying fiercely to enhance their online services so as not to lose their customers to newcomers. As a result, Korea’s’ financial landscape is undergoing the most active and sweeping shift in innovation and competition since the 1997 Asian financial crisis.

But the competitive entries of big tech and fintech companies in the financial sector has begun to raise concerns. They have so far been exempted from the rigorous regulations and rules for traditional financial companies since they do not fall under the financial category. That’s why conventional financial institutions have been complaining of reverse discrimination.

It is hard for consumers to get compensated for losses from financial services they subscribed to through big-tech and fintech companies, as they would claim they merely publicize the products of financial firms and are not directly involved in the marketing. The Financial Services Commission (FSC) also has embarked on a regulatory action to place them under financial rules.

As seen in all novel products and services, big tech’s entry into financial markets and the rise of fintech have both upsides and downsides. What poses as a greater problem from their emergence is a lag in our legal system. The Electronic Financial Transaction Act — which is supposed to cover big-tech and fintech enterprises — has stayed intact since its enactment in 2006. Over the years, the iPhone gave rise to smartphones in the U.S. after its birth in 2007, online chatting became commonplace in Korea through Kakao Talk in 2010, and money transfers became possible through smartphones via Toss in 2015. And yet, Korea’s financial authorities have been making makeshift additions to the law via guidelines and legislative interpretations when the need arose. 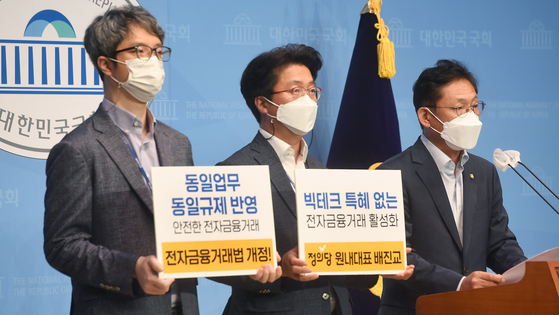 Lawmakers of the minor opposition Justice Party announce their submission of a bill aimed at removing special privileges for big tech and applying the same regulations to them as conventional financial companies at the National Assembly in July. [LIM HYUN-DONG]

Customer deposits for simple payments and transfers have grown to nearly 2 trillion won ($1.7 billion). The money has been deposited by customers, yet they may not be able to get their money back if simple pay operators use — and lose — the money for their management. Authorities have been addressing the problems through ad hoc guidelines, but since they lack binding force, compensation may not be possible.

The same problem occurs in the fintech industry. The 2006 Electronic Financial Transaction Act has allowed electronic money transfers but it is no longer in use. Simple pay was originally designed for pre-paid charging for online purchase. But that was impossible if not for positive legal interpretation by financial authorities. They must ask if they put the brakes on the rise of competitive fintech enterprises like Toss because of an outdated law.

A law drawn up 15 years ago when smartphones and messaging apps did not exist cannot protect consumers or promote innovation. This is like demanding today’s fintech companies fight a modern war with a sword and shield. The damages could go to consumers and future enterprises. The government must propose an amendment to the law through close coordination with related parties to reflect a new order in the financial sector.

Qualitative reform of regulations is the key