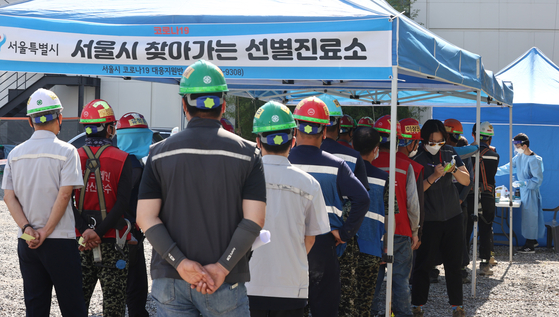 Construction workers line up to take virus tests at a Covid-19 screening center installed at a construction site in Gangnam District, southern Seoul on Friday. [YONHAP]


According to the Korea Disease Control and Prevention Agency (KDCA) on Friday, the country added 2,434 new Covid-19 cases, including 2,416 local infections, breaking the previous record of 2,221 set on Aug. 11.

Health authorities expressed concerns that the worst is yet to come as more people get tested following the Chuseok holiday, potentially causing a backlog of Covid-19 tests.

“The main reasons for [the surge] are analyzed to be the increase in travel during the Chuseok holiday, increase in contact between individuals and the loosened antivirus measures,” said Lee Ki-il, first control officer for the Central Disaster and Safety Countermeasure Headquarters, during Friday’s briefing.

“The cases could increase more tomorrow,” Lee said. “And the numbers could increase even more around next week, as people who came back from visiting [areas outside of Seoul] continue to get tested.”

Seoul posted 903 new cases, Gyeonggi 704 and Incheon 140. It is the first time infections registered in Seoul and its neighboring areas have topped 1,700.

“As the virus spread in the Seoul metropolitan area still remains fierce, it is highly likely that infections in the non-capital region will also increase due to increased travel across the country during the Chuseok holiday,” Lee said.

Health officials are especially alarmed by the transmissions in Daegu, where daily cases hit the highest point since the first wave of the pandemic in February 2020 — when the virus spread in Daegu and North Gyeongsang among followers of the Shincheonji Church of Jesus.

Of the 128 new cases, 55 people were tied to a clusters from a noraebang (singing room) in Seo District and a karaoke bar in Dalseong County that are frequently visited by Vietnamese nationals residing in the city.

After one employee tested positive on Monday, infections quickly spread to other colleagues and customers, raising the total to 77 in less than a week due to the closed and crowded environment in the facilities. According to the Daegu city government, 88 percent of the 77 infected people are Vietnamese.

While conducting contact tracing and preemptive Covid-19 tests, health officials in Daegu are sharing the situation with representatives of the local Vietnamese community in cooperation with the Vietnamese Embassy in Korea.

As virus transmissions spread rapidly nationwide, Prime Minister Kim Boo-kyum indicated that the government's goal of gradually easing distancing rules and returning to normal life by the end of October could be delayed if the situation worsens.

“It should be noted that if the virus situation is not controlled stably, it is inevitable to delay the phased recovery to normal life that everyone is eagerly looking forward to,” Kim said in a Covid-19 response meeting on Friday, urging people to get tested before they return to their daily routine and refrain from social gatherings.