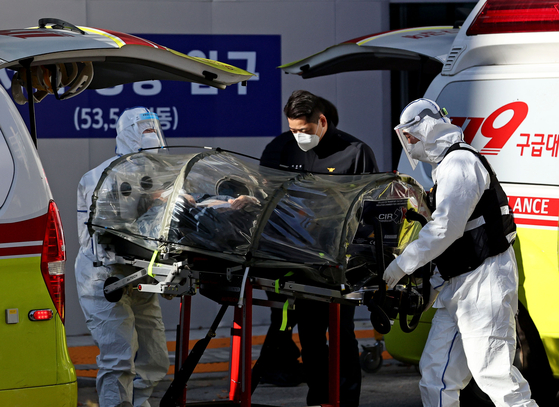 
Korea posted record-high daily Covid-19 cases of 5,123 Wednesday even before it has to deal with the new Omicron variant that is believed to be more contagious. 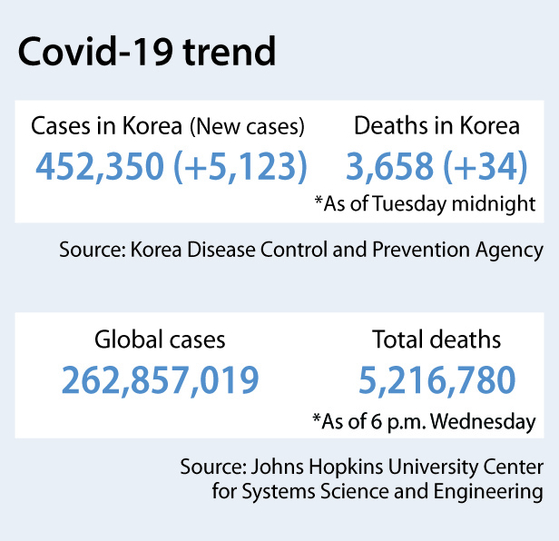 According to the Korea Disease Control and Prevention Agency (KDCA), the country’s daily Covid-19 cases hit 5,123 on Wednesday, a huge jump from 2,091 the day before, bringing the total caseload to 452,350.

The daily figure topped 5,000 for the first time since the pandemic began just a month after the country implemented eased social distancing restrictions under its “With Corona” set of policies. The previous record was 4,115, set on Nov. 24.

The capital city of Seoul alone had 2,212 patients, followed by 1,576 in Gyeonggi and 322 in Incheon — altogether accounting for 81 percent of total infections.

Critically ill Covid-19 patients also reached an all-time high of 723, up by 62 from the previous day. Of them, people aged 60 or older accounted for 84.4 percent.

Thirty-four more people died of the virus, raising the death toll to 3,658.

“We are mobilizing all administrative structure to earmark […] at least an additional 1,300 hospital beds by mid-December,” Interior and Safety Minister Jeon Hae-cheol said in a virus response meeting on Wednesday.

As cases continue to surge despite having over 80 percent of the population fully inoculated (as of 11 a.m. Wednesday), Education Minister Yoo Eun-hye and KDCA commissioner Jeong Eun-kyeong once again called on teenagers to get vaccinated in a joint briefing Wednesday.

According to government data, 99.9 percent of 2,990 students between the ages of 12 to 17 infected over the past two weeks didn’t complete their vaccinations.

“Starting from Dec. 13, the government will implement a two-week program in which healthcare workers will visit schools wishing to vaccinate their students,” Yoo said.

While Korea is facing its worst pandemic wave, the possibility was raised of the Omicron variant of Covid-19 already being in the country.

On Tuesday night, health authorities announced a full genomic sequencing process is underway on the country’s first four suspected cases of the variant.

The cases are a Korean couple in their 40s in Incheon who recently arrived from Nigeria — where Omicron infections have been found — on Nov. 24. They tested positive for Covid-19 the day after.

The couple stayed in the African nation from Nov. 14 to 23.

Health officials later found out that they transmitted the virus to their teenage son and an acquaintance in his 30s who drove them home from Incheon airport.

“They have no particular symptoms other than respiratory symptoms and muscle pain,” said Park Young-joon, head of the epidemiological investigation team at the Central Disease Control Headquarters, in a briefing on Wednesday.

Final results of the gene sequencing are expected to be announced Wednesday night at around 9 p.m. at the earliest.

Health authorities remain on high alert about a possible spread of the variant, as the couple weren't required to quarantine after entering the country as they were fully vaccinated with the Moderna vaccine. Currently, Korea issues quarantine exemptions to fully inoculated Korean nationals when entering the country.

The officials said they are conducting additional Covid-19 tests on 45 passengers who were on the same plane, as well as eight neighbors of the couple. One of the 45 passengers turned out to be positive, but was found to have contracted the Delta variant.

Adding to Korea's woes, Japan’s first Omicron case, a Namibian diplomat, was found to have had a recent layover at Incheon International Airport.

While details of the diplomat’s layover in Incheon Airport remain undisclosed, it is believed that he or she stayed at an airport facility for some time.

Korea launched a pan-government task force to cope with the new strain and discuss preventive measures, including representatives of the KDCA, Health Ministry, Foreign Ministry and immigration authorities.

“[The Omicron variant] could be a critical phase for future Covid-19 response,” Moon said on Tuesday, according to presidential spokesperson Park Kyung-mee. He instructed aides to swiftly develop test kits to diagnose the new strain and implement preventive measures.