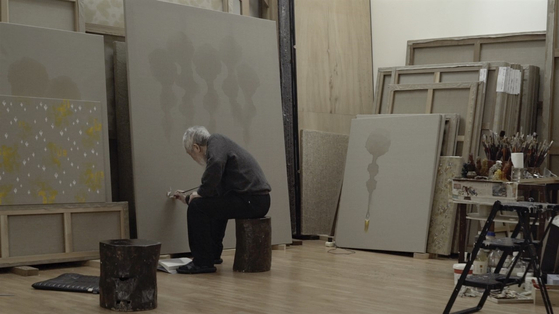 A scene from the documentary "The Man Who Paints Water Drops," which follows the renowned artist Kim Tschang-yeul between 2015 and 2019. [MIRU PICTURES]


The name Kim Tschang-yeul (1929-2021) is immediately associated with images of crystal clear water drops. The shapes and variations might vary, but the artist has drawn water drops, and water drops only for over half of his lifespan before he passed away at the age of 91 this January.

Countless times during press events for his solo exhibitions, journalists would press him about the reason behind his choice of subject and would follow up with questions like, “aren’t you tired of drawing the same material every time?” or “don’t you want try out something new?”

Sometimes the enigmatic artist would answer such questions directly, while other times he would be ambiguous. Kim sometimes cited his inspiration from teachings of Bodhidharma, well known as the father of Zen Buddhism or quotes from the Taoist text Tao Te Ching, which contain teachings of ancient Chinese sage Lao Tzu, while other times would say his water drops are “meaningless.”

“All of my actions of drawing water drops lie in dissolving everything within the drops and returning them back to nothingness,” he said in one interview. “The conduct is to empty all the rage, anxiety, and fear that I have.”

“All men want to date pretty women when they see one,” he replied in another interview. “But they can’t. Because they have a wife. An artist cannot be free to try out this and that. At least, not in my generation. [Artists] were free until Picasso.”

Some of Kim's answers had a darker tone, shedding light on his difficult past.

“Water drops are the lightest [substance] and they are materials closest to the nothingness, but for me, they are scars, tears caused by these scars, liquid thicker than tears.”


Kim was born in Maengsan, now in North Korea. He grew up during the Japanese occupation of Korea and the post-World War II division of the country. He experienced the Korean War (1950-53), bearing witness to countless deaths and tragedies.

The trauma of his youth would haunt him for the rest of his life and play an intrinsic role in his art.


His son Oan Kim hoped to share the deepness of his father’s wounds through his first documentary “The Man Who Paints Water Drops.” The documentary won the Emerging Documentary Filmmaker Award which is given to debuting filmmakers for their first or second Korean feature film at the 13th DMZ International Documentary Film Festival. The event took place from Sept. 9 to 16 this year. 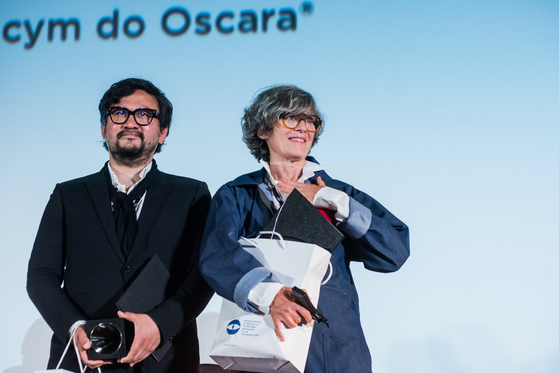 
The documentary initially had won the Silver Horn Award at the Krakow Film Festival in Poland this June for its high artistic values.

“I believe the impression that most people have about his works is that they are very simple, minimal and restrained,” Kim said during an online interview with the Korea JoongAng Daily last week. “For me, I always thought that there was another level of deepness behind his alluring works. The public today views old Kim Tschang-yeul as very quiet and sage-like, but when you peer deep down, he bears uncontrollable pain, darkness and wounds.”

Kim, aged 47, is the second son of Kim Tschang-yeul and his surviving French wife Martine Gillion Kim. He is active as a photographer and a musician and co-directed the documentary with fellow photographer, Brigitte Bouillot, aged 65.

“We [Oan and I] had just finished a project together when Oan brought up that he was filming a documentary about his father,” Bouillot said. “I had seen Kim Tschang-yeul’s art before, but I had never met the artist nor was I very familiar with his works. But I could sense that Oan was struggling emotionally so I offered to help him out with the script. It wasn’t too long after he asked me to co-direct the documentary and I was very happy to oblige.” 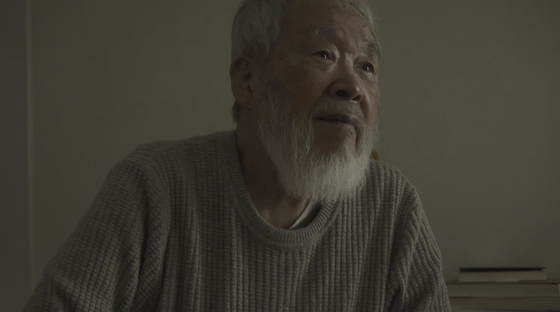 
The film begins with Oan Kim’s narration, describing his relationship with his father.

“There is a gap that exists between us,” Kim narrates. “A crack. But that is also part of our relationship.”

“I never told Oan about this, but what I found interesting was that, Kim Tschang-yeul was a man of solitude,” Bouillot said. “His love for his family and his loneliness existed simultaneously. Sometimes Oan had a little trouble understanding his solitary father, and for Kim Tschang-yeul, he would have had his own difficulties because he wasn’t French.”

“Sometimes when I observe my father, I see a man lost, unable to truly face others and the world,” Kim narrates at one point in the documentary. “He is always surrounded by those who love him, respect him, and wish him well, but there is always a distance: Between him and me, him and his wife, him and the world.”

The film captures moments of the artist’s life between 2015 to 2019 when he was aged between 85 and 90. Throughout the film, he remains mostly silent, his expression unreadable, the mystic element in him amplified by his unnaturally black, beady eyes, tufts of white hair and beard.

“Ironically enough, father was a very transparent man, and his character was very simple,” Kim said. “But he also seemed to be someone laden with heavy secrets. I cannot say from when I began to understand his silence, but what I can tell you is that I was finally able to grasp, through this film, just how much of the tragedy that he experienced in his youth affected his entire life.

“As majority of traumatized people do, my father did not talk much about what he saw,” Kim said. “But I was aware that he had suffered from the war, that he lost his friends and family, but I only truly realized the depth of his wounds through making this film. Then I came to know how it came to affect his art as well. On the outside, his water drops are beautiful, pure and calm people’s minds but I was sorry to see the origin of the beauty stemmed from his pain.”

Kim shared some of his insights into his father’s works where he empathized with the artist’s pain.

“In his youth [before he discovered water drops], there is an oil painting titled ‘Blessure’ [1964] in which one could depict bullet marks,” Kim said. “Another is one of his Art Informel paintings ‘Rite’ [1964], which symbolizes a person crushed to death by a tank. Both are examples of how his wounds were assimilated into his artworks. After he began to draw water drops, I think [his hurt] was depicted in melancholic forms. Water drops possess delicate fragility bound to disappear at any moment, but there are stains next to water drops, sometimes there aren’t any stains, and sometimes only stains are there. I think these are metaphors for death.”

Usually blank or distant, the artist only seems to be genuinely happy and content at the sight of his grandchildren. 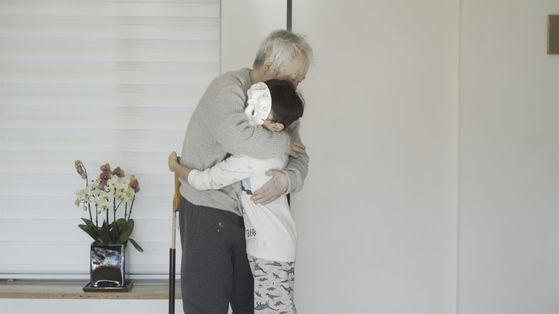 
“He loved children, especially babies,” Kim said. “So the moment when I turned 18, he would repeatedly ask me when was I going to marry and when will I have children. I think it’s a common question that may be frequently asked in Korea. I think he loved the purity that a child possesses when they’re young.

“As a father, he was a man of few words, but sometimes he was very strict, and we were always careful around him.”

“My perspective changed too, in how I viewed families and their relationships,” Bouillot said. “When I first met this family, I was so surprised by their quietness, and their distance. It felt cold to me. But as I filmed this documentary, I realized that it was merely an aspect of a culture that I’ve never experienced and it was thrilling for me to approach a different kind of relationship.”

Despite interviewing and filming his father for five years, Kim Tschang-yeul did not open up completely to his son, and there were still parts of his father that Kim only learned about through press interviews or other outside sources.

“I believe it was because of his manner of discretion, or his prudence,” Kim said. “I think he wouldn’t have wanted to reveal his vulnerability in front of his family or children. For him, it may have been easier to speak in front of strangers.”

“It’s actually funny because if Oan spent his time trying to break his father’s silence, I spent time trying to wheedle Oan out from his silence,” Bouillot said, smiling. 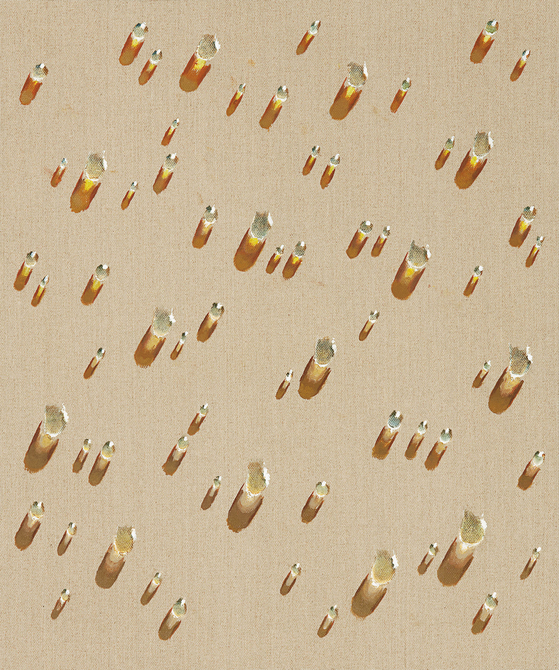 
When the Korea JoongAng Daily asked the two directors what water drops meant to them, Kim proceeded to give an answer that was as enigmatic as his father’s.

“What I can tell you is that water drops cannot be whittled down to one meaning,” Kim said. “Imagery possesses equivocality and people continue to perceive and view art [due to this quality]. I can give out numerous explanations about what water drops mean to me, but I don’t think it’s up to me to put them on the map, to come up with a one particular meaning for them.”

“For me, water drops are about the irony between innocence and cruelty, purity and violence,” Bouillot said. “I think all of the artist’s emotions and expressions are swelling up and clashing in these drops. It’s a way of how all of humanity’s ambiguity and their expressions are clustered inside this minutely transparent surface.”

“The Man Who Paints Water Drops" is set to be released locally, but neither a distributor nor a date have been set as of yet.

K-water inks technology pact with AWWA of the U.S.