The cable channel is already well known for its myriad of audition shows, such as the hit “Produce” and “Show Me the Money” franchises. But “Street Woman Fighter” is not the conventional audition program that viewers are familiar with. 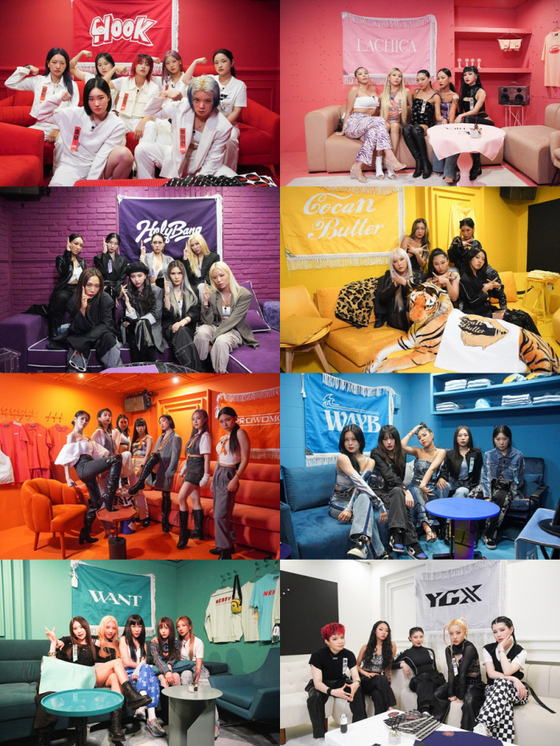 
“Street Woman Fighter” centers around street dance — referring to a wide range of subcultural dance styles such as breakdancing, popping, locking and waacking — which is unfamiliar to most domestic viewers who are used to K-pop choreography. So in the beginning, the show was considered non-mainstream and expected to see lukewarm success.

The results have turned out to be surprising. “Street Woman Fighter” started with ratings of 0.8 percent for its first episode, but after clips of powerful performances by the competitors gained popularity online, the show’s ratings reached 2.6 percent after only four episodes; an impressive number considering that ratings for seasons of the hit “Produce” series peaked around 3 to 5 percent for their final episodes that announced the winners.

By mid-September, video clips from “Street Woman Fighter” garnered a total of over 45 million views; the highest for any program currently airing in Korea, according to Smart Media Rep which distributes short TV clips to YouTube and other platforms. Several performance videos on YouTube have millions of views.

Even the songs used on the show have gained popularity and reentered local music charts, most notably “Hey Mama” (2015) by French DJ David Guetta. The song that was released six years ago reached 16th place on Genie Music and 98th on Melon’s Top 100 chart. Dance cover videos of choreography from the show, often by other K-pop stars, are also trending on YouTube and TikTok. 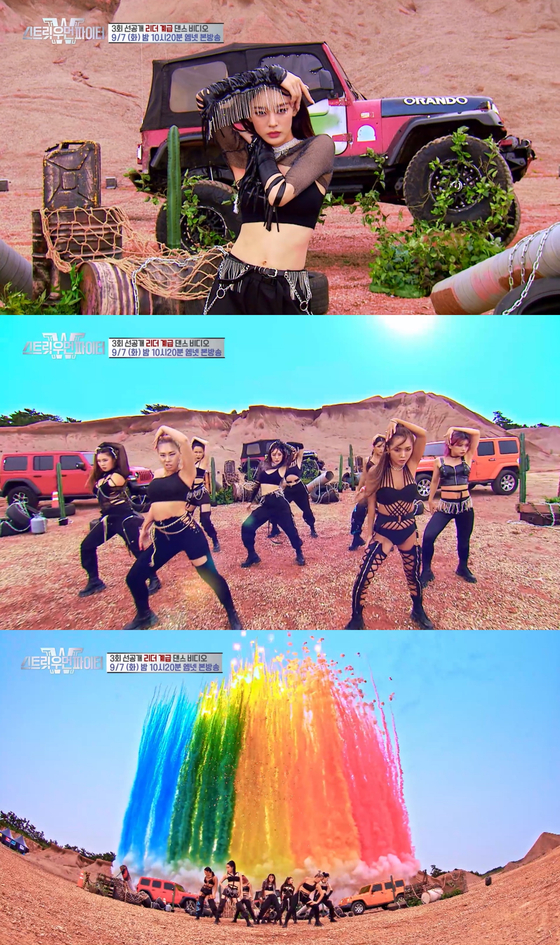 
“Dance audition shows per se are non-mainstream, especially when it comes to street dance and an all-female one at that,” said pop culture critic Kim Heon-sik. “But that’s what makes ‘Street Woman Fighter’ original and refreshing to viewers. The genre has been slowly but surely gaining traction online. Mnet grasped the trend early on and brought it to the surface through this show.”

Dancer Kame who has been running OFD Dance Studio, a dance tutoring center in Hongdae, western Seoul, told the Korea JoongAng Daily that the studio has been seeing a surge in inquiries to learn street dance since the show started. The studio is jointly run by dancers Monika and Lip J who are currently competing on “Street Woman Fighter.”

“Time slots for lessons get filled up much quicker since the program started,” Kame said, “especially classes instructed by current contestants on the show like Honey J and Kayday. Most of the students who newly signed up, who are women aged between their teens and 30s, say they became interested after watching the show.”

In the beginning of the show, each contestant called out someone whom she thought is less skilled and challenged her to a freestyle dance-off dubbed a “No Respect Mission." [SCREEN CAPTURE]

The dancefloor on the show is called the “Fight Zone." [SCREEN CAPTURE]


The fact that “Street Woman Fighter” is a dance audition is not the only factor that makes it unconventional. As suggested by the title, the show’s format and overall atmosphere are extremely competitive and entertainingly aggressive. In the beginning, each contestant called out someone whom she thought is less skilled and challenged her to a freestyle dance-off dubbed a “No Respect Mission,” on the show’s dancefloor called the “Fight Zone.”

There is always plenty of tension among the crews during team missions as well. “I watched all the other teams, and my team performed the best,” “Even if there are 100 dancers in front of me, I can dance, catching everyone’s attention,” the contestants say openly.

When the dancers feel discontent, for instance when they are placed in the back of a dance formation where they’re less visible, they are never hesitant to speak their minds and directly demand what they want. At the same time, they show respect toward other dancers’ talent and professionalism. 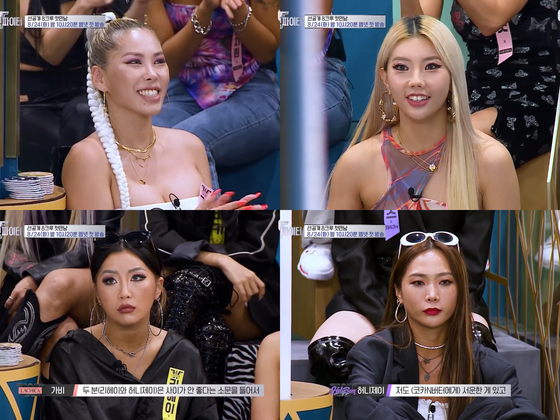 
All of these traits are a far cry from the typical female audition programs that Korean viewers are used to, which feature contestants in their teens and early 20s who aspire to be K-pop idols. Most of those contestants portray a demure and innocent public image.

The typical female audition show can be described by iconic imagery from the first season of “Produce” in which dozens of young girls sang “Pick me,” which was called out as problematic as it conveyed a sense of women passively waiting to be selected rather than proactively proving themselves with their skills. 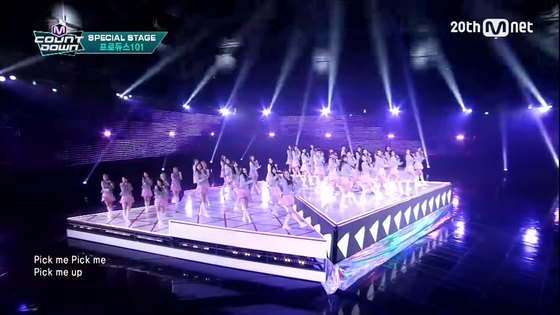 
Contestants on “Street Woman Fighter” are considered to be the opposite of that. They even swear when they feel frustrated, which is something unimaginable for K-pop girl group hopefuls. But all of those atypical traits are the reason why many viewers — especially young women — find the show appealing. One fan of the show in her early 20s shared that while she was initially impressed by the dance performances, the contestants’ attitudes is what made her stay tuned.

“As I continued watching, the way those women speak gave me a sense of vicarious satisfaction,” she said.


“Since I’m quite timid in real life, it felt liberating to see confident women who speak their minds without being afraid of coming across as too strong. I’m used to K-pop idol contestants showing humility, saying the clichéd line ‘I think the other girl will win.’ So it was a pleasant shock to see a female dancer full of self-assurance, saying ‘Of course I’m going to win. I’m the best.’ The dancers inspired me to voice my opinions with more courage, and that’s what made me emotionally invested in the show.”

“‘Street Woman Fighter’ also reflects characteristics of the MZ generation [millennials and Generation Z], who are familiar with expressing their opinions straightforwardly,” critic Kim said. “Considering that women tend to make more loyal fans, it makes sense that a show that features other talented women who say whatever they want has quickly gained popularity.”


Kim added that this shift in trends may explain why conventional K-pop girl group audition programs like “Girls Planet 999,” which also started airing on the same channel earlier in the same month as “Street Woman Fighter,” are not as popular as before.

“Viewers today are less likely to react positively to the image of a passive female,” he said. “Instead, they find strong-minded ‘girl crushes’ more appealing and form an invested fan base.”

The dance industry is also welcoming the show’s success, as many dancers have been struggling to find opportunities to perform on stage since the outbreak of the Covid-19 pandemic. Many of the contestants on “Street Woman Fighter” have also been working with K-pop idols as choreographers or backup dancers in music videos and on-stage performances, but have shared little to none of the spotlight and mostly remained behind the scenes.

Far right, dancer No:ze, who is currently a contestant on "Street Woman Fighter," appears as a backup dancer in the music video for HyunA&Dawn's "Ping Pong" (2021). [SCREEN CAPTURE]


Now, netizens are having fun spotting the dancers in other K-pop acts’ videos, and have developed a heightened awareness that a dancer is a professional occupation. “Street Woman Fighter” has successfully introduced the public to the street dance subculture, and the genre’s rise in popularity is expected to have ongoing synergy with K-pop.

“Street dance has been a non-mainstream genre, but the dancers didn’t do anything differently to achieve this popularity,” said Kame. “We’re just doing what we’ve always been doing until now, but on television this time. And since they’re not professional television personalities, I think the way they talk and behave comes across as novel and more authentic to viewers. The pandemic has been putting a lot of limitations on the dance industry, but it’s great that the show shed light on this genre very effectively.”