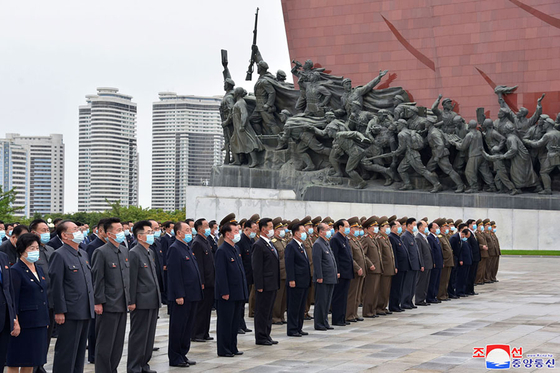 South Korea's Joint Chiefs of Staff (JCS) said a projectile believed to be a short-range missile was fired eastward from Mupyong-ri in northern Chagang Province, near the border with China, at around 6:40 a.m.

"The military is maintaining a readiness posture while closely monitoring related trends," said the JCS, adding that South Korean and the U.S. intelligence authorities are conducting further analysis "taking into consideration characteristics of the currently detected data."

This launch came days after Kim Yo-jong, the North Korean leader's influential sister, said in a statement Saturday that Pyongyang could take steps to improve relations with Seoul, including an inter-Korean summit and the reestablishment of the joint liaison office, if the South abandons its "hostility" and "double standards." She also called on Seoul to use "prudence" on the use of the terminology "provocation" if it wants to improve inter-Korean relations, warning it may "trigger a war of words."

The launch came 13 days after North Korea fired two short-range ballistic missiles from a train-borne launcher into the East Sea on Sept. 15.

The NSC "expressed regret over the launch which came at a time when stabilization of the Korean Peninsula situation is very important," it added.

The NSC "decided to closely consult with the United States and other relevant countries while closely monitoring North Korea's future trends."

A U.S. State Department spokesperson took a step further and said in a statement Tuesday, "The United States condemns the DPRK's missile launch," adding that it is "in violation of multiple UN Security Council Resolutions and poses a threat to the DPRK's neighbors and the international community."

DPRK is the acronym for the North's official name, the Democratic People' Republic of Korea.

However, the spokesperson added, "We remain committed to a diplomatic approach to the DPRK and call on them to engage in dialogue." Neither South Korean nor U.S. officials in their immediate responses used the term "provocation."

The U.S. Indo-Pacific Command said in a statement, "While we have assessed that this event does not pose an immediate threat to U.S. personnel or territory, or to our allies, the missile launch highlights the destabilizing impact of the DPRK's illicit weapons program."

The largest and oldest American combatant command added, "The U.S. commitment to the defense of the Republic of Korea and Japan remains ironclad."

Japanese government officials said that the projectile "appeared to be a ballistic missile" and was believed to have landed in waters outside of Japan's exclusive economic zone, reported Japan's Kyodo News.

South Korean and U.S. military authorities did not clarify if Tuesday's launch was a ballistic missile. Military authorities are conducting detailed analyses of the flight range, speed, and altitude as it reportedly showed a different flight trajectory than previous North Korean missile tests.

The projectile flew less than 200 kilometers at an altitude of about 30 kilometers, said Seoul sources.

Some defense experts said that it could be a new type of weapon, such as a hypersonic glide vehicle (HGV), taking into consideration that its flight trajectory seems to differ from that of known North Korean short-range ballistic missiles. HGVs boast increased maneuverability and fly at least five times the speed of sound, or Mach 5, making them harder to track and intercept.

In a report to the eighth congress of the ruling Workers' Party at the beginning of the year, North Korean leader Kim Jong-un said that Pyongyang is developing new weapons systems including "hypersonic gliding-flight warheads for new-type ballistic rockets."

China revealed a new vehicle-mounted Dongfeng-17, or DF-17, medium-range missile system equipped with a hypersonic glide vehicle in a military parade in October 2019.

Analysts say that Pyongyang may be trying to leverage itself through the back-to-back statements and latest missiles launches ahead of a possible return to talks with Seoul and Washington. 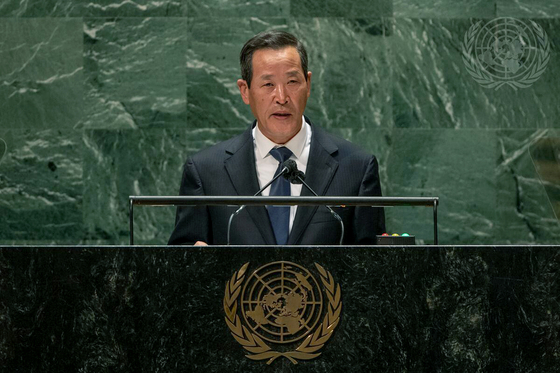 Just 20 minutes after news broke on the missile launch, North Korea's ambassador to the United Nations told the UN General Assembly in New York that the United States must permanently suspend its joint military exercises with South Korea and its deployment of strategic weapons to the peninsula.

"If the U.S. wants to see the Korean War, the most prolonged and long-lasting war in the world, come to an end and if it is really desirous of peace and reconciliation on the Korean Peninsula," said Kim Song, North Korea's permanent representative to the United Nations, "it should take the first step towards giving up its hostile policy against the DPRK by stopping permanently the joint military exercises and the deployment of all kinds of strategic weapons [...] in and around the Korean Peninsula."

He continued in his address to the 76th session of the General Assembly Monday evening, "I am convinced that a good prospect would be opened for the U.S.-DPRK relations and inter-Korean relations if the U.S. refrains from threatening the DPRK and gives up its hostility towards it."

Kim also warned that "if the U.S. continues to commit acts to threaten us" and depends on the legacy of the Cold War while trying to solve the Korean Peninsula situation, "it would really turn out to be unfavorable for them."

Referring the United States' recent withdrawal of troops from Afghanistan, Kim noted that the Korean War has not ended for 70 years.

"The DPRK-U.S. relations are not merely the relations between unfriendly countries without diplomatic relations, but between belligerent countries which are legally in a state of war," Kim said.

Kim argued that North Korea has a right to "self-defense" as a "war deterrent" and to maintain a "balance of power on the Korean Peninsula."

He stressed, "We would never violate or endanger the security of the U.S., South Korea and our neighboring countries."

Referring to leader Kim's report to the eighth congress in January, the ambassador said that the "key to establishing a new DPRK-U.S. relationship lies in the withdrawal of its hostile policy," and an approach to Washington "on the principle of power for power and goodwill for goodwill."

He said, "The U.S. has now two options: One is to contribute to the peace and stability of the Korean Peninsula and the world by withdrawing an anachronistic, hostile policy towards the DPRK in a bold and complete manner."

Ambassador Kim called on the Joe Biden administration to "translate its state policy standard of no hostility towards the DPRK into practical actions" and "remove the double standards."

The Biden administration said it plans to take a "calibrated, practical" approach toward North Korea policy. While it has offered talks anytime and "without preconditions," it also indicated it does not plan to ease sanctions on Pyongyang.

Kim continued, "If the U.S. shows its bold decision to give up its hostile policy, we are also prepared to respond willingly at any time. But it is our judgment that there is no prospect at the present stage for the U.S. to really withdraw its hostile policy towards the DPRK."

North Korea convened its Supreme People's Assembly, its rubber-stamp legislature, Tuesday, which decides domestic affairs but could also reaffirm its strategy toward the United States.