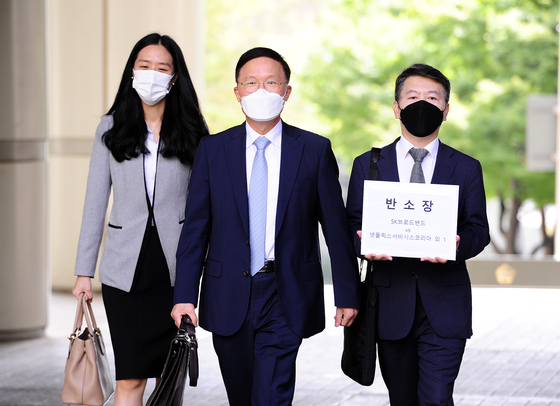 Lawyer Kang Sin-seob of Shin & Kim LLC, center, the attorney for SK Broadband heads to the Seoul High Court to file a counter-suit against Netflix on Thursday with his team. [SK BROADBAND]


SK Broadband filed a counter-suit against Netflix in their running feud over network usage fees, arguing that Netflix needs to pay up for the maintenance cost of traffic by its customers.

“Netflix is using the company’s network for free, even though it’s provided at a price that covers the high maintenance cost required to manage internet networks,” SK Broadband said on Thursday. “Since May 2018 to September 2021, the internet traffic by Netflix users has surged by 24 times.”

Since 2019, SK Broadband has been demanding Netflix share the higher costs of network maintenance resulting from its growing number of users. It asked the Korea Communications Commission (KCC) — the media regulator — to mediate the disagreement.

In April 2020, Netflix filed a suit against the broadband company, asking the court to confirm that it has no obligation to pay network usage fees to SK Broadband.

The Seoul Central District ruled against Netflix on June 25 and the company appealed.

SK Broadband's lawsuit is filed with the Seoul High Court, which is hearing the appeal, and will be ruled on jointly with the appeal.

“Netflix has failed to comply with our negotiating efforts despite the ruling of the court,” SK Broadband said, “and they have not paid the network usage fee, so we have decided to file a counter-lawsuit based on the law.”

The first hearing in the appeal and countersuit will take place on Dec. 23.

Netflix argues that it does not pay any company network usage fees in any other country.

Netflix maintains that it does not have a duty to pay network maintenance fees because broadband network management is not its job.

“The ruling that came on June 25 from the Seoul Central District Court denies the roles that a content provider [CP] and an internet service provider [ISP] divide among themselves,” Netflix said in a statement on July 16 after filing its appeal. “It shifts the responsibility of an ISP to a CP, which is already fulfilling its duties in content production.”

Regarding the counterclaim, Netflix said it will “thoroughly look over the files” and “search for ways to cooperate with SK Broadband for users of both services.”

According to Rep. Kim Sang-hee of the ruling Democratic Party, 78.5 percent of Korea's internet traffic during the second quarter of this year was for foreign content providers, including Netflix and Google.