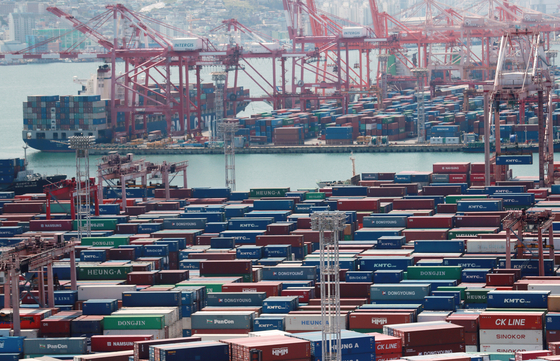 Cargo ready for export at a dock in Busan on Friday. Korea's exports in September hit a record after increasing 17 percent year on year. At the current rate, exports are expected to break the full-year record achieved in 2018. [YONHAP]

Exports increased 16.7 percent on year to a record $55.8 billion in September, according to the Ministry of Trade, Industry and Energy.

It is the 11th consecutive month of on-year growth and the longest winning streak since 2018.

“Despite the fact that there were fewer working days due to Chuseok holidays, exports in September achieved a record,” said Moon Dong-min, deputy minister for trade and investment, adding that the data have been compiled since 1956.

Moon said while there are worries that governments globally will begin to ease up on expansionary fiscal policies, trade continues to grow.

“SMEs have been doing exceptionally,” Moon said. “SMEs are adjusting quickly to the changes in the consumer markets since the pandemic and have adjusted to online export marketing.”

The trade official said while Korea’s exports have been better-than-expected, there are a few risks, especially the rising price of oil.

“The spread of the Covid-19 variant, problems in trade logistics, shortages of parts and rising raw material prices remain risk factors,” Moon said. “As crude prices have been rising, the costs have increased for industry.”
The price of Dubai Crude rose 75 percent in September on year from $41.51 per barrel in September 2020 to $72.63 last month.

Semiconductor exports in September were $12.2 billion, up 28.2 percent on year, the 15th consecutive monthly increase.