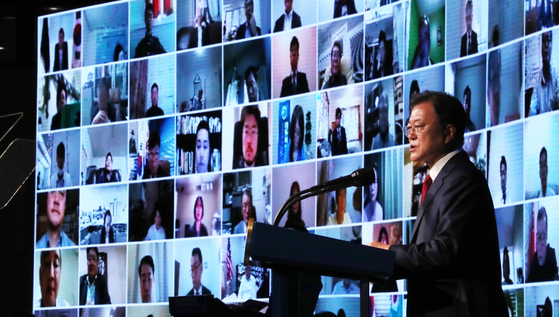 
President Moon Jae-in said that there is “no reason for confrontation” between the two Koreas Tuesday, a day after the restoring of cross-border hotlines, stressing the importance of co-prosperity with the North.

“From the perspective of overseas Koreans, a Korea divided in two, into the South and the North, must be a sad reality,” said Moon, speaking at a ceremony marking 15th World Korean Day. “But we have no reason for confrontation. Competition over political systems and comparison of national power has long since become meaningless.”

The two Koreas restored cross-border communication lines Monday, 55 days after Pyongyang suspended them to protest a military exercise, taken by the South as a positive signal to deescalate tensions and improve inter-Korean relations.

“Now, it is even more important to prosper together,” continued Moon. “Even if unification takes time, the South and North can cooperate and get along well with each other.”

Moon was joined by some 300 overseas compatriots, including leaders of Korean associations, elected officials and businesspeople in-person and virtually at the event held at the Grand Walkerhill Hotel in eastern Seoul.

He said that he “dreams of a future generation of 80 million South and North Koreans and 7.5 million Koreans living overseas empathizing with each other and working in solidarity for the sustainable development of the Korean Peninsula and the world.”

Moon also called on Koreans abroad to play a role in spreading word of the international strength of “one Korea” and the “possibility of greater prosperity through lasting peace” on the peninsula.

He especially stressed that overseas Korean politicians “have become a strong bridge for peace on the Korean Peninsula.” Four Korean-Americans were elected to the U.S. House of Representatives last year, and Rhie Ye-one became the first member of Korean heritage in the Bundestag, the German federal parliament, in September.

In an address to the UN General Assembly on Sept. 22, Moon proposed a formal declaration to end the 1950-53 Korean War between the two Koreas, the United States and possibly China.

In his Armed Forces Day speech on Oct. 1, he said an end-of-war declaration could open “a new era of conciliation and cooperation with the international community,” while also underscoring his responsibility as commander-in-chief to establish and maintain lasting peace on the Korean Peninsula.

South Korea’s Unification Ministry and Defense Ministry confirmed Tuesday that daily calls were made over their hotlines with the North for a second day.

Pyongyang stopped responding to daily calls over the inter-Korean hotlines on Aug. 10.

This came after inter-Korean hotlines had been revived on July 27, some 13 months after the North unilaterally cut off all communication lines with the South including the Panmunjom channel at the inter-Korean border village, the joint liaison office line and two military hotlines.

Pyongyang has been calling on Seoul to withdraw its “hostile policy,” seen as a reference to joint military drills with Washington and U.S.-led sanctions in place over its nuclear weapons and ballistic missiles programs.

Speaking to the Supreme People's Assembly on Sept. 29, North Korean leader Kim Jong-un called on the South to withdraw the “double-dealing attitude and hostile viewpoint and policies towards the other side before declaring the termination of war,” adding “this is an important task to be settled beforehand in order to control the inter-Korean relations and open up a bright future.”

Kim also accused the United States of “petty tricks” when offering “diplomatic engagement,” calling it “an extension of the hostile policy” pursued by previous U.S. administrations in his first direct response to the Joe Biden administration’s repeated calls for “dialogue without preconditions.”

Ned Price, spokesman for the U.S. State Department, said in a press briefing in Washington on the resumption of inter-Korean communications, “We support inter-Korean dialogue and engagement, as well as cooperation, and we’ll continue to work with our [South Korean] partners to that end.”

He referred to the acronym for the North’s official name, the Democratic People's Republic of Korea.

Price stood by Washington’s offer to meet with North Korean officials “without preconditions.”

Washington will continue to consult closely its allies including Seoul and Tokyo on “how best to engage with the DPRK” on the “overarching goal” of the complete denuclearization of the Korean Peninsula, he added.

But she stressed, “We, of course, condemn any illicit missile launches, which are destabilizing to the region and to the international community,” adding that the Biden administration is closely consulting with allies and the United Nations on the “next steps.”

However, reiterating a commitment to engagement with the North, Psaki said, “In our messages, we have made specific proposals for discussion with the DPRK. We hope DPRK will respond positively to our outreach.”