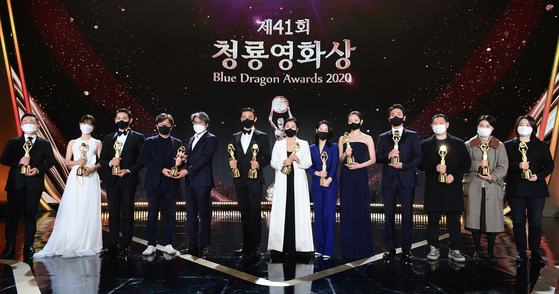 Award recipients of the 41st Blue Dragon Film Awards held in February at the Incheon Paradise City pose for a photo after the event. [ILGAN SPORTS]

From Wednesday, the organizing committee has been receiving submissions for its Cheong Jeong Won Short Film Award nominees. The award is open to any film that is 40 minutes long or less and completed filming after Nov. 1, 2020. Submissions will be accepted until Oct. 15.

The Blue Dragon Film Awards was established in 1963 to promote the local film industry and has positioned itself as one of the top film awards in Korea.

The event will be held twice this year for the first time ever, as the 41st edition took place in February after it was postponed last year due to Covid-19.