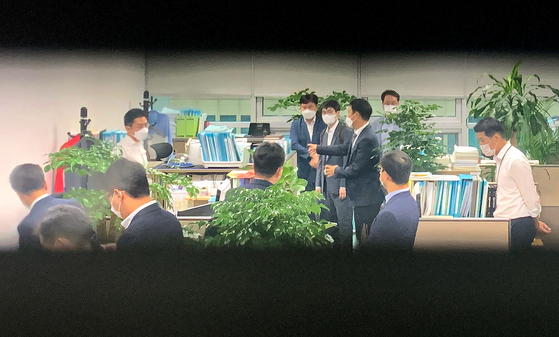 
The state anti-corruption investigation watchdog opened a probe into allegations against the country's intelligence chief for engaging in political interference in the lead-up to the presidential election in March, it announced Wednesday.

Newsverse released reports alleging that a prosecutor who had previously worked under Yoon secretly requested that the opposition PPP file a criminal complaint against three pro-government figures for their involvement in fanning salacious claims about Yoon's wife.

Yoon’s wife Kim Keon-hee has been pummeled by rumors that she previously worked as a bar hostess under the alias “Julie” and had lived with several high-profile men before her marriage to Yoon.

The claims have sparked outrage within Yoon’s campaign and among his supporters, some of whom in August held a weekend-long protest outside a bookstore in Jongno District, central Seoul, that commissioned a mural lampooning Kim based off the rumors.

After the Newsverse reports were released, Yoon’s campaign group filed a complaint with the CIO on Sept. 13 against Park and two others it alleged collaborated with the media outlet to provide it information for its hit pieces.

The campaign filed an additional complaint against Park with the CIO on Sept. 15, accusing him of election meddling for having had an interview about a case in which Yoon is alleged to have given preferential treatment to his aide’s brother.

However, the CIO is not only investigating the intelligence chief.

On Wednesday morning, the CIO also conducted a raid into the office of PPP lawmaker Jeong Jeom-sig to investigate the claims raised by Newsverse.

Jeong is the former prosecutor who is suspected of drafting the PPP’s complaint, which was allegedly requested by Yoon.

After the raid at Jeong's office in the National Assembly, which lasted an hour and half, Jeong told reporters that the CIO team left without finding any documents that implicate him. “This case has nothing to do with me,” he said.

When they heard about the raid, PPP floor leader Kim Gi-hyeon and other party leaders immediately headed to Jeong's office to protest the raid.

“I'm appalled that the CIO is taking such ridiculous measures,” Kim told reporters, insisting that there is no truth to the claim that the party was asked by prosecutors to file a complaint against pro-government figures.

By opening a probe into the intelligence chief, the CIO is now examining allegations from both sides of the story — that prosecutors close to Yoon requested a criminal complaint in order to conduct a political investigation on his behalf, and that Park leaked the story to the media to damage Yoon's image before the presidential election.

Bad day for the law